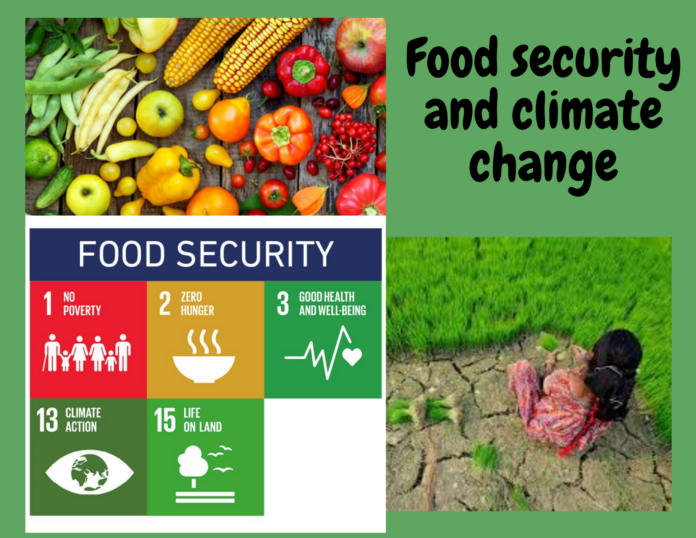 Pakistan is the fifth-most severely impacted nation in the world by climate change. Due to its semi-arid climate, the nation is vulnerable to natural calamities including earthquakes, floods, and drought, all of which have a negative effect on food security and way of life. Half of Pakistan’s population depends on agriculture for their livelihood, which is one of the sectors most affected by climate change. Future climatic changes are probably going to have an impact on temperature and rainfall, which may increase the frequency and intensity of floods in Pakistan, particularly in the Balochistan and Sindh regions. In these provinces, the patterns of rainfall are gradually becoming more erratic.

The agricultural sector in our nation paints a gloomy picture for food security, and Pakistan’s climate-sensitive regions are struggling to meet productivity goals as a result of deforestation, declining freshwater supplies, groundwater depletion, and ecosystem damage from extreme weather events like heat waves and major floods. Furthermore, a worrying trend of using agricultural land for non-cultivation purposes jeopardizes the productivity of the food supply in the future.

The complexity of these climate change-related concerns has made our nation’s hunger problem worse. Thus, providing people with access to healthy food is a huge task on a national, regional, and international scale. According to the World Food Program (WFP), there is growing food insecurity in the world— 41 million people are on the verge of famine. Pakistan ranks 92nd among 116 nations worldwide on the Global Hunger Index (GHI) 2021, or 25th from the bottom.

The climate-related emergency is making Pakistan’s food situation much worse. According to the Global Climate Risk Index 2021, Pakistan is one of the ten most climate-vulnerable nations. Climate change has had a negative impact on water supplies, which are rapidly depleting as a result of poor management of climatic changes. Pakistan is one of the world’s most populous nations. The challenge of feeding Pakistan’s expanding population is formidable. 18 percent of Pakistanis are experiencing a severe food crisis, while 43 percent of Pakistanis lack adequate food, according to the WFP. Agriculture has a significant role in Pakistan’s food security and rural employment. Its performance is still influenced by the weather, though. Climate change has an impact on agricultural productivity, which increases food poverty and harms Pakistan’s export industry. In order to deal with climate effects, crop patterns must be altered by implementing climate-friendly crops, soil-refreshing procedures, and heat-tolerant seeds. Through the construction of effective market infrastructure and financial incentives for adopting non-traditional agricultural practices, crop diversification, and climate-smart farming, farmers should be motivated.

For greater productivity, it is deemed essential to continue using the most recent technology in farm mechanization tasks such as irrigation, crop production, crop protection, and land development. Agriculture can be significantly improved by maintaining affordable prices for farm inputs, including high-yielding varieties, and by ensuring the development of cost-effective agricultural equipment and machinery powered by renewable energy sources as an alternative to extremely expensive fuel that degrades the environment.

To adjust to the new realities of climate change, Pakistan might engage in sustainable agriculture development techniques and projects. In order to address water constraints and increase agricultural output, this could entail adopting climate-smart agricultural techniques, such as switching to high-yielding crops, effective water management, lowering water losses, and constructing small and medium-sized dams.

Flood irrigation is frequently used by farmers to grow crops like rice and sugarcane. These crops need large amounts of water, depleting aquifers beneath the ground. This severely lowers the water table, increases salinity, and causes water logging, rendering the land unusable for the following growing season. Through subsidies, the government should promote the use of digital technology, contemporary farming methods, effective farm mechanization, and crop diversity.

Reducing carbon emissions will lessen Pakistan’s effects of global warming. In order to encourage consumers to transition to electric vehicles, the government must implement mass transit in all major cities. Additionally, this will aid in lowering the skyrocketing cost of oil imports and provide some respite to the general public from inflation brought on by growing oil prices. By subsidizing consumer solar equipment, the government can encourage the use of solar energy and lessen the burden on conventional power generation sources.

However, challenges like food security and climate change cannot be resolved by the government alone; as a result, community support is necessary. The negative impacts of climate change and the significance of water conservation should be made more widely known to Pakistanis. The interests and concerns of marginalized communities, such as the poor, women, disabled, and indigenous groups, should be better addressed through the design and implementation of community-led sustainable development projects. Pakistan should think about developing a more resilient, inclusive, and sustainable economy that can withstand changes in the domain of climate change and food security.