A case for debt forgiveness 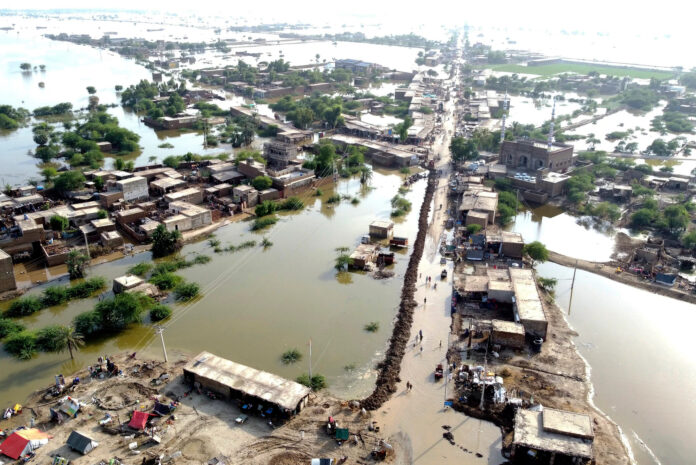 Sindh and Balochistan received up to eight times their usual monthly averages of rainfall, preceded by record breaking heatwaves in March and April. The total financial damage is estimated to be $19.5 billion. When these numbers are read against the backdrop of Pakistan’s miniscule contributions to global greenhouse gas emissions while being one of the top ten countries worst affected by climate change, the numbers appear not just shocking, they seem grossly unfair.

Such climate change induced extreme weather events will only get more intense and frequent in the future. For this, the developed world bears direct responsibility, and they must compensate the affected countries with climate reparations. Steps to that effect have been taken in the past but efforts have fallen far short, and promises have been broken consistently. In 2010, the OECD pledged to raise $100 billion in climate finance annually by 2020 but was only able to raise $80 billion. One-fifth of that amount actually reached the 48 poorest countries in the world when in reality the true need could soon top $300 billion.

Take the US, historically the most polluting country in the world. Since 1850, it has produced 27 percent of the total carbon dioxide emissions of the world, more than twice as much as the second country on the list. Recently, it was surpassed by China as the largest annual greenhouse gas emitter. It is also the largest consumer of oil and gas, and the third largest coal user in the world. On top of that, its track record towards accountability is shameful.

Former President Obama pledged $2 million to the UN’s Green Climate Fund but never delivered it. Clean Air Act, the outdated legislation that grants regulatory mandate to the Environmental Protection Agency to curb greenhouse gas emissions was passed in 1970. The US Supreme Court in a recent ruling curbed the powers of the EPA, as expanded by the Clean Power Plan. And Congress has passed no major legislation tackling greenhouse emissions since 2008.

The US bears outsized responsibility, yet it has always stuttered in its efforts to take effective measures towards reducing greenhouse gas emissions and fulfilling its pledges towards climate reparations.

The US bears outsized responsibility, yet it has always stuttered in its efforts to take effective measures towards reducing greenhouse gas emissions and fulfilling its pledges towards climate reparations. Debt forgiveness as an equitable and effective reparatory measure. But does it make sense for Pakistan to advocate for it?

It makes humanitarian sense. The Universal Declaration of Human Rights, the founding declaration of principles for the international human rights framework, recognizes “inherent dignity . . . of all members of the human family is the foundation of freedom, justice and peace in the world.” Without capital freed up from servicing external debt, critical development and social reforms will remain a huge challenge. Debt cancellation will allow Pakistan to make more poverty related investments.

One might argue that Pakistan accrued debt and must be held accountable in paying it back. Certainly, part of the crisis can be attributed to excessive borrowing and corruption, but the overall list of causes is more complex than that. Over lending by the US as a way to secure political alliance during the Cold War years, War on Terror and beyond has played a huge role. In addition to that, tight monetary policy by the US since the 1980s has increased loan interest rates and debt burdens.

It makes economic sense too. This can be looked at from two angles. First, the principle of diminishing marginal utility says that the more you have of a particular thing, the less value you attach to every additional increment of it. One-thousandth of one percent of the US GDP might not make a dent to the US economy, but it can wipe off the debt of a small country and allow it to take crucial steps towards supplying basic human needs.

Second, the US government is beholden to institutional investors and multilateral lenders over and above the need of individual countries. Investors are unwilling to simply erase debt off their balance sheets. But forgiving debt can benefit both the US treasury and investors. Money freed up from servicing external debt will reflect in an increase in demand for imports by debtor countries. This will directly benefit labour, agriculture, and industry in creditor countries. An increase in productivity will increase tax revenue and the benefits will trickle up towards investors. If done right, it is a win-win situation.

If the US takes steps to these effect, other creditor countries will follow. Time is beyond due for the developed world to take the issue of climate reparations seriously and pay their fair share towards compensating affected countries. Mere acknowledgements and sympathy notes are not enough. Debt forgiveness would be a salient way for creditor countries to put their money where their mouth is.

Azwar Shakeel
The author is a common law jurisdiction lawyer. He is an undergraduate of the University of California, Berkeley and has written extensively on legal and socio-political topics.