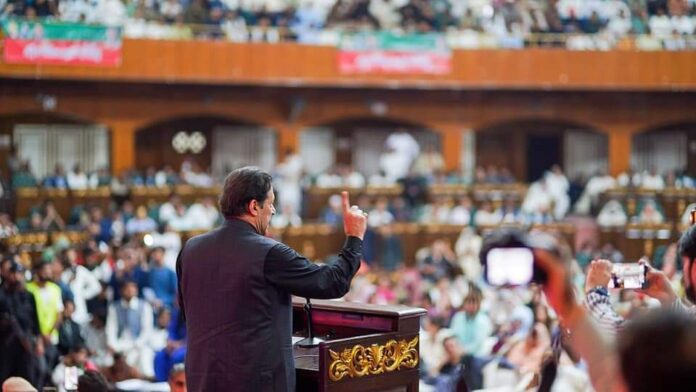 ISLAMABAD: Former Prime Minister and PTI Chairman Imran Khan Thursday said it was time ripe to rid the country of corrupt rulers, saying that he would take millions of people to the federal Capital after fully preparing PTI’s tigers to fight the ‘decisive battle’ for liberating the country from the corrupt rulers, once and for all.

Speaking at an oath-taking ceremony of office-bearers of the Organisational Advisory Council here at Jinnah Convention Centre, Imran Khan said that they were not fully ready on May 25 when Rana used massive teargas and shelling against PTI women and children because they had intended to hold a peaceful long march on the federal capital.

Reacting to the threats of Interior Minister, Pakistan Tehreek-e-Insaf (PTI) Imran Khan made it clear that they would come to Islamabad with full preparation now and Rana Sanaullah would not find a place to hide in the federal capital if he resorted to use brutality and violence against peaceful marchers this time.

He stated that these corrupt rulers would not easily give us freedom as the current system is nourishing them and increasing their corrupt money massively,” he added.

He said that one has to struggle for freedom and sacrifices have to be made, because the current system served the interest of the powerful ruling elites, adding that the real freedom movement was the biggest movement after the freedom movement of Pakistan.

He maintained that no one gave independence in the plate, they would have to sacrifice for it, adding that that a coward person cannot become a great leader and a person, who can control and end his fear, can become a big leader.

Imran said that he was trying to explain to the nation what kind of Medina welfare state was. He urged the party workers to join his long march when he gave a call, as this was a testing time for the PTI workers and the nation.

“Seeing the preparation of the PTI tigers and tigresses on Saturday-next then he would give a final date for a long march,” Imran added.

PTI Chairman went on to say that no nation sacrifices its people to fulfill others’ wishes but the corrupt rulers of Pakistan had allowed the West to carry out around 400 drone attacks in the country and brought foreign war in the motherland, leaving thousands of Pakistanis martyred and injured.

“I want to see that Pakistan never kneels before any other country, and does not sacrifice its people in someone else’s war, as 80,000 of our people were martyred in America’s war,” he added.

He said that the whole tribal areas was destroyed because the two corrupts Nawaz Sharif and Zardari allowed the drone strikes because they could not afford to antagonize their foreign masters since their wealth stashed abroad.

He observed that the corrupt government was waiving off their billions of rupees’ corruption cases because they did not impose to serve the people and the country but to protest and safeguard their own thefts and to please their masters.

He observed that the rupee was going downwards against the US dollar at alarming pace, the economy was shrinking rapidly and inflation was breaking 50 years record due to the imported government’s flawed and wrong economic policy.

Imran Khan said that as Prime Minister, Rehmatulil Alameen Authority was created so that people can read the biography of the Holy Prophet Muhammad (PBUH), the youth will know how the Prophet (PBUH) worked hard for the people of Arabia and they became a great nation.

He said that worshiping stone idols was not the only shirk, but trading conscience and bowing down to the idol of fear was also a shirk, adding that people of Kufa knew that Imam Hussain was on the right path, but they did not support Imam Hussain in fear of Yazid and allowed a great tragedy in the history of Islam to happen.

Imran Khan said that now this imported government was talking about taking oil and wheat from Russia, when the people were drowned the ocean of inflation, as he had discussed this matter with Russia five months ago.

PTI Chairman went on to say that India was also buying oil from Russia at cheap prices, but these thieves were afraid of their masters, as a result, today Pakistan was passing through the worst time of its history, but they never had the courage.

Imran Khan said that when Fazlur Rehman and Bilawal staged sit-ins, they neither put obstacles in their ways, nor filed cases against them but the corrupt junta used teargas and shelling against peaceful PTI marchers. However, he made it clear that now Shahbaz Sharif and Rana Sanaullah should worry because this time we will come with full preparation.

“We have a protest on Saturday, I will hold a rally in Rahim Yar Khan and there will be a historic protest across the country,” he added. He said that the protest would be litmus test for them and afterward, he would decide when to give the final call because this time around, they would march to Islamabad well-prepared.