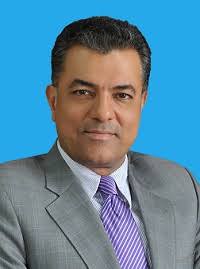 Senior official of Ministry of Climate Change Joudat Ayaz stated that “Pakistan is among those countries, who are not very much responsible for climate change, but have to face its punishment”

While Pakistan strives to reduce its GHG emissions, “the punishment is quite high as compared with our faults,” he added in an interview with Gwadar Pro.

When it comes to 2022, millions of people have been severely affected by the intense heat that has swept across Pakistan since March.

Across South Asia, sweltering temperatures have been linked to an increase in heat-related deaths, failed wheat harvests, power outages and fires, with poor and marginalized communities particularly affected.

Over the last few years, reads the report, “countries like Haiti, the Philippines and Pakistan that are recurrently affected by catastrophes continuously rank among the most affected countries both in the long-term index and in the index for the respective year.”

Joudat Ayaz stated, “Our fruits and crops cannot make full fruit or grains due to high temperatures this year. And if the temperature of the world increases from certain level then many coastal cities will get under the water and apparently Pakistan’s coastline will be affected.”

As a result of global warming, rapidly melting glaciers have created over 3,044 glacial lakes in Gilgit-Baltistan and Khyber Pakhtunkhwa. Thirty-three of these could burst at any moment.

“We were able to divert families and people, but this is showing us how real and dangerous climate stress is for Pakistan, it’s quite literally here and now,” Sherry Rehman, Federal Minister for Climate Change, once told the BBC World Service Newshour radio programme.

“The sad part of the story is that we are one of the lowest emitters in the world, and yet we are experiencing the ravages of an almost existential shift in climate patterns and are a living example of all the crises that can erupt.”

“Climate is discussed in the world but it is not taken seriously,” Joudat Ayaz told the reporter. Historical climate emissions should be paid attention to as climate change is “created by big polluting countries. Basically, their ancestors. ”

“World leaders were deciding by sitting in a room. The majority of them were more than sixty years old. Some were more than seventy. People sitting out there and protesting for green peace were mostly twenty to thirty-five years old.

They were saying that when the effect of global warming appeared all these old men of offices would have died. We have to live with the consequences of their decisions,” Joudat Ayaz explained.

As per a report titled “Analysis: Which countries are historically responsible for climate change?” released by Carbon Brief, history matters because the cumulative amount of carbon dioxide (CO2) emitted since the start of the industrial revolution is closely tied to the 1.2C of warming that has already occurred. In total, humans have pumped around 2,500bn tonnes of CO2 (GtCO2) into the atmosphere since 1850, leaving less than 500GtCO2 of remaining carbon budget to stay below 1.5C of warming.

In first place on the rankings, the US has released more than 509GtCO2 since 1850 and is responsible for the largest share of historical emissions, Carbon Brief analysis shows, with some 20% of the global total. Although big polluters have significantly reduced their emissions in recent decades, they remain among the most important contributors to historical warming today.

“I am not satisfied with the financial and technical assistance we got from these developed countries,” Joudat Ayaz told Gwadar Pro, adding that developed countries from Western Europe and North America never fulfill their promise. “Unfortunately, if someone has promised one hundred rupees, only twenty-five rupees reach the destination eventually.”

“Unless we are given seats in the room, or we have the mike, we are not asked about the solution and nothing can be done,” Joudat Ayaz added.

December 9, 2022
LAHORE: After the Quaid-e-Azam Trophy, the action moves on to the white-ball List A tournament Pakistan Cup, which is all set to commence from...