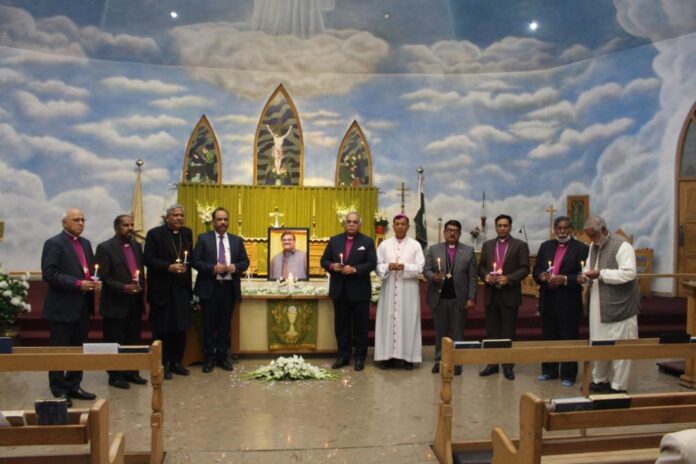 LAHORE: The leadership of the Church of Pakistan has expressed concern over the spike in incidents of terrorism and mob violence in the country and has demanded the government to provide protection to all citizens by addressing the root causes of extremism in society.

The demands were made during a special memorial service held at the Central Praying Hands Cathedral Church of the Raiwind Diocese for lay leader William Siraj, who was gunned down by unknown assailants in Peshawar on January 30. Another priest, Reverend Patrick Naeem was injured in the attack. The service was attended

by all bishops of the Church of Pakistan, Christians from various walks of life, members of the civil society and human rights activists.

Addressing the occasion, Church of Pakistan Moderator/President Bishop Dr Azad Marshall condemned the Peshawar attack and expressed his reservations over the delay in the arrest of the perpetrators.

“It’s been nearly a month since our brother was killed by suspected terrorists but there has been no progress in the case so far. The attack on the two church leaders has instilled a sense of insecurity in the community members and we continue to look towards the State for justice for the victim’s family,” he said.

Bishop Marshall said the church was very concerned about growing intolerance and extremism in society, which was not just impacting the citizens but was also bringing a bad name to Pakistan.

“The lynching incidents in Sialkot and Mian Channu and similar attempts in Faisalabad and Muzaffargarh show that the successive governments’ capitulation to extremist forces has emboldened and given a sense of impunity to this barbaric public mentality.

“It is time that the government and religious leaders act beyond condemnations. There’s a need to identify the ideologies and regressive narratives that are responsible for this toxicity in our society and work to address them. We also need to come up with legislation that acts as a strong deterrent against misuse of the blasphemy laws otherwise no citizen will be safe from false accusations and the risk of being lynched by mobs,” he said.

The church leader also criticised the government for ignoring their pleas to protect minority girls from sexual exploitation in the guise of religious conversion and marriage. “We have repeatedly raised this issue but the government has shown no interest in addressing this matter of utmost concern,” he said.

Bishop Marshall said that in view of the mounting challenges facing the community he had decided to arrange a consultation meeting of Christian leaders from all walks of life to find ways to address the issues.

“It’s time the community leaders sit together and make a comprehensive strategy for the future. We will announce the date of the meeting soon after consulting all stakeholders,” he said.

The bishop also announced that the head of the worldwide Anglican Communion, Archbishop of Canterbury Justin Welby, has come to Pakistan on a three-day visit.

“We are grateful to the archbishop for undertaking this visit despite the security situation here. This is the third time he is visiting Pakistan, making him the only archbishop of Canterbury to visit an Anglican province more than once. Pakistan has a special place in His grace’s heart and we hope his visit here will be a source of blessing to us all,” said Bishop Marshall.

He added that the archbishop would also be meeting with top civil and military leaders and he would highlight the issues of the Pakistani Christian community with them.

The memorial service was also addressed by bishops of other dioceses of the CoP. The participants later lit candles and offered prayers for the deceased church leader and all other victims of violence.

LAHORE: Legendary classical dancer Zarin Panna was bestowed the "Shahkaar Against All Odds Award” for her valuable contribution to the art of dance, despite...
Read more
Uncategorized

Nowadays, every one of us is busy in the race of achieving the best living standards that we can, and we want to be...
Read more
- Advertisment -