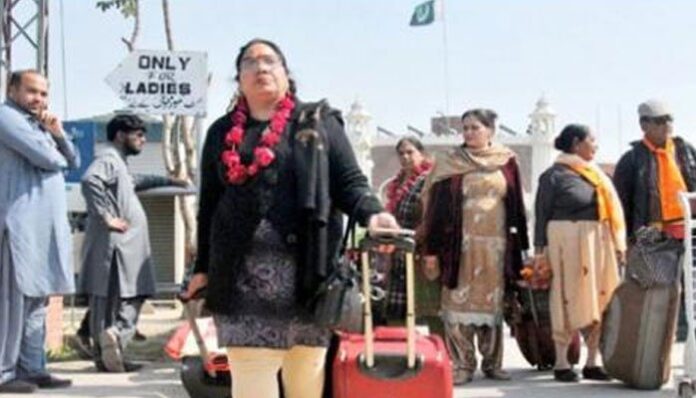 A fifteen-member delegation of Hindu yatrees (pilgrims) including men, women and children Saturday visited Samadi of Shri Paramhans Ji Maharaj and Teri temple Karak after completion of rehabilitation work and performed religious rituals on first day of the new year.

The delegation that arrived at Peshawar Airport was escorted to the temple amid strict security arrangements.

On the occasion, Hindu community members belonging to Sind and representatives of Pakistan Hindu Council were also present in the temple.

“Steps of Pakistani government to boost religious tourism and to protect worship places of minorities including Teri Temple would promote positive image of the country in the comity of nations including neighboring India”, he said.

“Indian government should also give religious freedom to Muslims and make efforts to abridge gap between religion and humanity in their country”.

“Pakistan is safe for religious tourism and people living in the country had always welcomed tourists of other faints with respect”, he said.

Another delegation of 200 Hindu pilgrims that arrived at Wahga border crossing from India landed at Peshawar airport from Lahore.

The Hindu pilgrims were en route to Teri temple for worship. The delegation would reach at Teri Temple in the evening for worship and stay there overnight.

Hustle and bustle was witnessed in the area where Hindu Community members were seen intermingling with local population praising their arrangements to welcome foreigners.