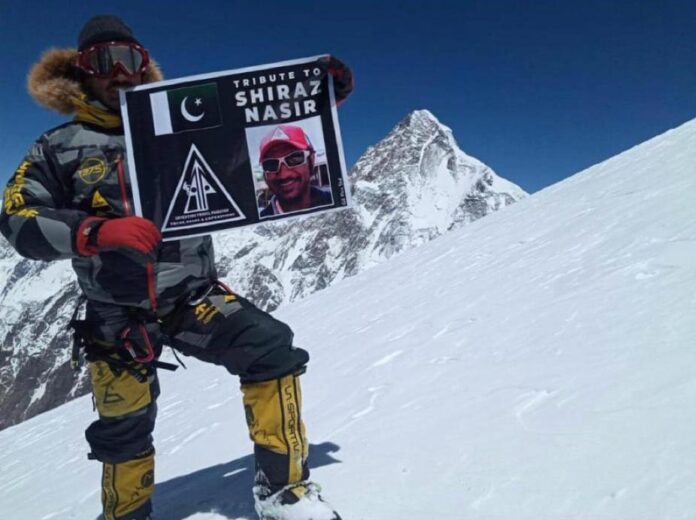 Mountaineer Nazer Sadpara has paid tribute to Shiraz Nasir (late) after reaching the camp three of Broad Peak, the twelfth highest mountain in the world at 8,047 metres above sea level, Pakistan Today learnt on Saturday.

Shiraz, a Lahore-based paraglider, had died in Dolomos area in Chitral when turbulent weather had made his glider collapse mid-air.

Local residents had said that Shiraz, 40, was flying from Moghlasht to Charira in his glider when it had fallen from high altitude due to stormy winds. Nasir’s backbone was fractured due to the impact and was rushed to DHQ hospital but he had unfortunately succumbed to his injuries on the way.

Shiraz was the son of Major (r) Shahid Nasir and television actor Sumbal Shahid, and a nephew of popular TV artist Bushra Ansari.

Shiraz was one of the first persons in Pakistan to introduce the idea of taking groups of people on mountainous expeditions towards the North. He was a pioneer in the tour operating industry of Pakistan and was the founder of Adventure Travel Pakistan (ATP), which is one of the most successful tour operating companies in the country.