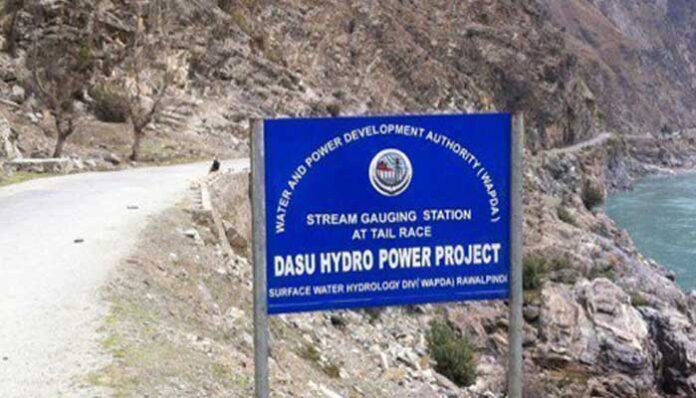 ISLAMABAD: The Chinese firm working on the Dasu Hydropower Project has stopped work on the site citing “security concerns” and laid off all but the most essential Pakistani workers following the 14 July bus explosion that killed nine Chines engineers.

In this regard, a letter written to the government of Pakistan by China Gezhouba, the company working on Dasu Dam, said that they could not continue work due to the attack; whereas all Pakistani employees who have been laid will be paid salaries and other benefits.

The company also wrote a letter to employees stating that owing to the attack, which caused extremely heavy casualties, the company management has been forced to suspend the construction of the project.

It said that the company was regretful about having to terminate employment contract with all Pakistani personnel, complying with the Pakistan Industrial and Commercial Ordinances (PICO), other than some necessary personnel to maintain on-site maintenance and operation.

Dasu Dam Project Director Anwarul Haq confirmed the letter issued the Chinese company; however, he added that work on the dam will resume as soon as security matters were rectified.

According to sources, the shutdown by Chinese companies will further increase the cost of the project and the provincial government’s efforts to increase power generation to meet growing demands.

According to the letter, 14-days half-month wages from July 15′ to July 28 and gratuity will be paid at one time.

“CGGC DASU HPP Management is once again with great thanks to all the Pakistani personnel who participated in the accident rescue on July 14th 2021,” the letter concluded.

Meanwhile, Interior Minister Sheikh Rasheed said on Saturday that that 15 Chinese officials have been included in the ongoing investigation on the Dasu bus tragedy in which 13 people, including nine Chinese nationals, were killed.

Addressing a press conference in Islamabad, Rasheed said that a 15-member team of Chinese investigators had arrived yesterday and visited the incident site with security agency officials.

“The investigation of the event is at its final stages and the highest institutions of Pakistan are investigating it. Fifteen individuals from China have been included [in the investigation] as well,” the interior minister said.

Rasheed said that the Chinese government had also been taken on board and was being informed about updates as they were received.

“We completely reassure the Chinese government that these culprits, hidden hands and enemies of CPEC and China-Pakistan friendship will never be forgiven at any cost.”

China had earlier announced that it was sending a team to Pakistan to deal with the aftermath of the incident. “China will send a cross-departmental joint working group to Pakistan to help with relevant work,” Chinese foreign ministry spokesman Zhao Lijian had said at a media briefing in Beijing.

He said a similar effort, to impact Pakistan’s relationship with China, had failed in Quetta, referring to a blast at the Serena Hotel at a time when the Chinese ambassador was visiting, claiming that the two countries shared a friendship that could not be affected by such events.

The people involved in the incident would be brought under the ambit of law and exposed, the interior minister said, adding that arrests had been made from Lahore.

Elaborating on other measures in the wake of the incident, he said the prime minister had instructed Foreign Minister Shah Mahmood Qureshi to visit China and the Ministry of Interior had directed security agencies to increase the protection of Chinese workers in Pakistan.

Rasheed claimed that the Dasu incident was planned days before a meeting of the Joint Coordination Committee of CPEC — originally scheduled for July 16. The meeting was subsequently postponed in the incident’s aftermath.

Questioned about the situation at the Chaman border, Rasheed said the interior ministry was looking after border management and all institutions were alert and prepared to take on any eventuality.

“At the moment no incident has happened that merits serious notice,” he said.

The interior minister also said some arrests had been made in Peshawar when questioned on the display of Afghan Taliban flags in some areas.

On July 14, a bus, carrying Chinese workers and Pakistanis, who were on their way to their workplace for an ongoing project in Khyber Pakhtunkhwa (KP) plunged into a ravine after an alleged explosion (IED blast), killing nine Chinese nationals and at least three accompanying Pakistani citizens.

In the incident nine Chinese nationals and four Pakistanis, including two Frontier Constabulary (FC) personnel were killed, while 23 others were injured.

A day later Information and Broadcasting Minister Fawad Chaudhry said that terrorism could not be ruled out from the Dasu bus tragedy in Kohistan, saying that initial investigations confirmed traces of explosives.

The Dasu Hydropower Project is a project on the Indus River located 7km upstream of Dasu Town, in upper Kohistan. The site is 74km downstream of the proposed Diamer Bhasha Dam site and 345km from Islamabad.

The Dasu Hydropower Project is one of the priority projects under the Power Policy, 2013 and the Vision 2025 of the government of Pakistan.