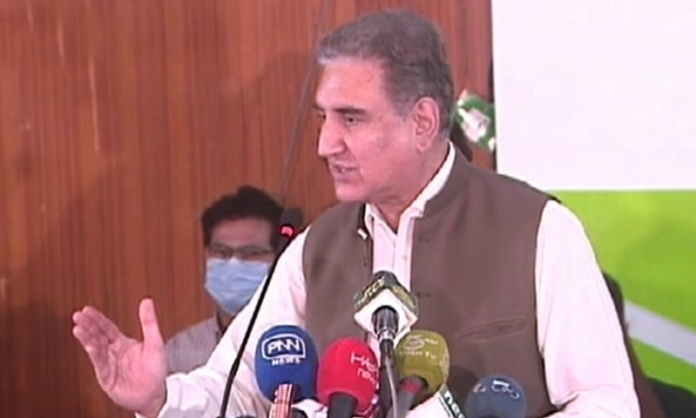 Foreign Minister Shah Mehmood Qureshi has urged the Punjab chief minister to ensure the presence of officials at the south Punjab secretariat, further stating their should be an institution designated to investigate their conduct.

Addressing a ceremony in Multan to energise the Nishtar Hospital through solar power, Qureshi asked Buzdar to “silently give the duty to a responsible institution to come and investigate the appointments you have made in the south Punjab secretariat, whether Bahawalpur’s or Multan’s, […] and how many of those officers are consistently serving their time in Multan and Bahawalpur, how many days they are physically present in the cities and aware of [the affairs of] the cities.”

The minister said that it was his duty as Multan’s representative to bring the chief minister’s attention to the issue, adding that the presence of the officers and their authorisation to address issues of local people were required if the prime minister and chief minister believed in the policy of devolution of power and setting up secretariats and appointing officers.

“If they are not present here and they are not authorised [to make decisions] then how will people’s problems be solved? This is something to ponder upon. I will request the representatives of south Punjab to think on this issue and pay attention to it.”

Qureshi said that he would personally request south Punjab’s secretaries to “please spend some time here […] we are ready to serve you in every way; if we ask you to do anything unfair then don’t do it but at least pay attention to the legitimate issues of the people.”

“We have the honour that a son of south Punjab has been given this honour by God; the party (PTI) has trusted you that you are our chief minister and hopefully you complete your tenure in a respectful way and serve your whole time.

“We are with you with with all our heart and spirit. We are not among the elements that will conspire and pull [your] legs. We want to see you strong and successful,” Qureshi said, stressing, however, that the issues he was highlighting were problems related to the masses and not someone’s personal issue.

“It (resolution of issues) is the need of the region,” said Qureshi, adding that the PTI had conceptualised a south Punjab province in its mandate keeping that need in mind.

Qureshi also questioned how much of the Rs4 billion grant which had been set aside for the south Punjab secretariat had actually been spent with 11 months of the current financial year having passed. “This is an innocent question and this region wants answers for it,” he said.

In a meeting in March, Chief Minister Buzdar had expressed his indignation over the performance of the south Punjab secretariat and directed the secretaries of its different departments to resolve problems of the region’s people and expedite execution of projects.

The secretaries were told their departments would have to perform now and that any inefficiency on their part wouldn’t be tolerated at all. They were also warned of strict action for showing any negligence in this regard.

The foreign minister during today’s ceremony also provided various updates on the progress of development and infrastructure projects in Multan. He said Pakistan’s focus had shifted from thermal to renewable energy and elaborated on the potential and benefits of hydel and solar energy.

“Pakistan has the capacity to generate 50,000 megawatts of electricity,” he said of the country’s hydroelectricity potential.

ISLAMABAD: Pakistan has been consistently urging the international community to help Afghanistan avert a looming humanitarian catastrophe as a fallout of the exit of...
Read more
NATIONAL

LAHORE: The Punjab government on Monday launched a door-to-door coronavirus vaccination campaign in the province. The “reach every door” drive was launched in all 36...
Read more
NATIONAL

SRINAGAR: Despite heavy deployment of troops and police across the region in India-occupied Jammu and Kashmir, streets erupted in jubilation on Sunday night immediately...
Read more
Sports

October 25, 2021
WASHINGTON: In an interview with US broadcaster CBS News' "60 Minutes", Saad bin Khalid al-Jabri -- formerly a top spy and interlocutor between the...