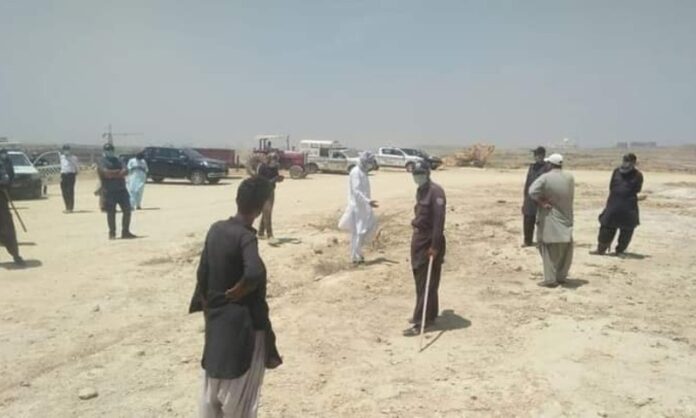 Private guards alleged shot a resident of Karachi’s Gadap Town during Bahria Town Karachi’s (BTK) move to raze down several agricultural lands to pave the way for housing projects in the outskirts of the city.

Moreover, it had been reported that, along with the guards, the firing had been carried out by policemen in civvies as well.

Moreover, the police officials were reluctant to share any information about the incident. However, Abdul Hafeez, an activist of Sindh Indigenous Rights Alliance and resident of Kathor area, said that the BTK guards along with police tried to destroy the crops in Kamal Khan Jokhio Goth on Friday morning but the locals put up resistance and forced them to abandon the attempt.

However, the armed private guards accompanied by police both in uniform and civilian clothes returned to the scene again after Friday prayers and started destroying the crops with bulldozers, according to Hafeez.

In resistance, about 100 residents tried to stop the guards. One of those residents threw a stone at the guards, upon which they opened fire. At least one villager, Shaukat Khaskheli, sustained a bullet injury, while another suffered minor injuries.

The guards allegedly took away the injured villager and 3-4 other locals with them, Hafeez said.

Villagers were protesting against the BTK personnel and demanding that the injured person be handed over to them and that a first information report (FIR) be lodged against the BTK guards.

Hafeez later told a local news outlet that instead of taking Khaskheli to a hospital, BTK personnel took him in an injured state to the local police station to get an FIR registered against him. Locals then reached the police station, got hold of Khaskheli and shifted him to hospital.

The activist said that around 50-60 acres of agricultural land was being demolished to pave the way for BTK’s new housing projects near Kathor.

In a tweet, Hafeez said that the BTK officials had told the owner of the land that the land had been awarded to the real estate giant by the Supreme Court (SC) and therefore the demolition work would continue. However, they were unable to produce any documents when asked to support their claim by the owner, the activist added.

The development comes a week after Pakistan People’s Party (PPP) Chairman Bilawal Bhutto-Zardari, whose party rules Sindh, said that he had taken notice of reports of villagers being evicted by employees of BTK and law enforcers in Karachi and demanded a report on the matter.

The PPP chairman had said that the apex court’s decision was in front of everyone and neither he nor anyone else wanted to commit “contempt of court”.

Hafeez said BTK officials had stopped their eviction efforts after Bilawal took notice of them, but they had resumed the same today after a gap of a week.