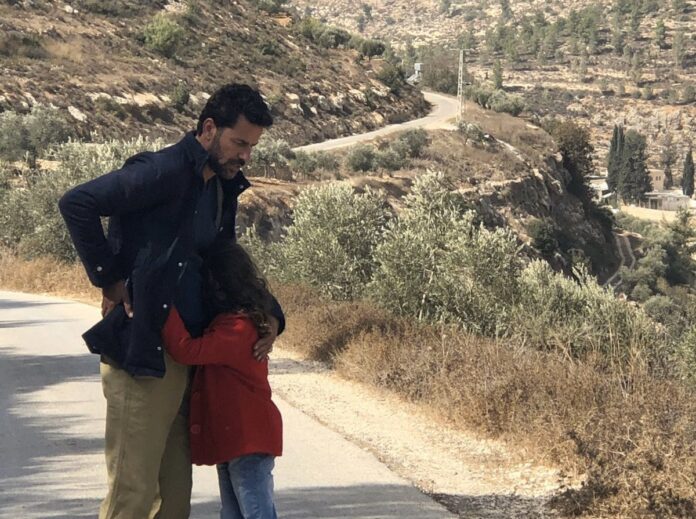 We all owe Farah Nabulsi an enormous debt of gratitude. In a short 24-minute film, The Present, she has exposed the oppressive indecency of the Israeli occupation while telling the deeply moving story of a Palestinian family. What is especially exciting is that after winning awards at a number of international film festivals, Ms. Nabulsi has been nominated for an Academy Award for this remarkable work of art.

It’s a simple story about a complex reality: Yusef, a Palestinian man on his day off from work, takes Yasmine, his little daughter, into the city to buy his wife, Noor, an anniversary present. It ought to be simple, but it’s not, because to get to the shops they must pass through an Israeli-controlled checkpoint. And the ordeal they must endure becomes the crux of the story.

Ever since I first witnessed the dehumanizing and humiliating treatment meted out to Palestinians at Israeli checkpoints, I’ve tried to explain the situation to American audiences. I don’t have to try any longer. I can just ask them to see The Present. After that first experience with the checkpoints, I wrote a piece, “Anger and Fear.” It was horrifying to witness. Young Israeli boys and girls holding weapons, shouting commands, demeaning the older Palestinians, lined up in what looked like cattle shoots, trying to get to work, go to school, shop for necessities, or visit family. “Don’t look at me.” “Keep your heads down.” “Hold up your IDs.” The Palestinians, with the heads down obeyed these commands because they had no other choice if they wanted to pass.

It was the “master/slave dialectic” playing out in front of me. The young Israelis demonstrating anger to assert their control. But without their weapons and their angry commands, they were frightened little people. Meanwhile, the Palestinians were feigning fear. Because they had no control over their lives, they suffered the indignity in silence. But inside they were seething in anger at the humiliation they were forced to endure.

Farah Nabulsi has truly given us a present. While watching The Present, viewers will experience a gamut of emotions: affection, anger, fear, sadness and then exhilaration. Please watch it, and cheer her to victory on April 25.

We’ve seen this play out in other settings. It’s the way occupation armies always behave. It’s also the way police forces behave in America’s inner cities. And the consequences, in all cases, are devastating. What’s so remarkable about The Present is how much it accomplishes in such a short time. Palestinians in this film aren’t one-dimensional stick figures. Just five minutes into the story and you’ve fallen in love with Yusef, Noor, and Yasmine. Little gestures and telling glances bring home the obvious affection they feel for one another. Because the portraits of this little Palestinian family are so real, you care about them and want them to find happiness. Aside from the powerful story that unfolds, this is one of the film’s most important contributions.

Because Palestinians have long been reduced in the West to objects or “a problem to be solved” so that Israeli humanity can live with security and peace, elevating Palestinian humanity becomes a revolutionary act. It upends the equation that Israeli hasbarists have created and reinforced to justify their behaviors.

As powerful as the story is, it’s dramatic ending is equally rich in meaning and the message it conveys. I won’t ruin it for you because I want you to experience it for yourself. But when you do, just remember a lesson I learned from one of my mentors, Dan Berrigan, the activist Jesuit priest. He told me that in the insanity of our Kafkaesque world, just being able to affirm a simple truth like “Two plus two equals four” becomes a revolutionary act. In The Present, it’s Yasmine who affirms simple truth – the revolutionary act – and leaves the oppressors powerless.

Farah Nabulsi has truly given us a present. While watching The Present, viewers will experience a gamut of emotions: affection, anger, fear, sadness and then exhilaration. Please watch it, and cheer her to victory on April 25.