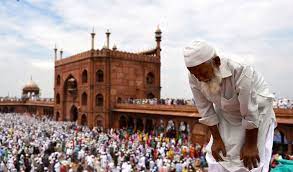 Though India is “constitutionally” a secular country, it is practically a Hindu country. Almost all organs of government, even the judiciary,  act in tandem to persecute minorities. In a recent judgment, a civil court directed the Director-General of the Archaeological Survey of India to get a “comprehensive archaeological physical survey” of the site of the Gyanvapi Mosque. It added that that the department should find out if the “religious structure standing at present at the disputed site is a superimposition, alteration or addition or there is a structural overlapping of any kind, with or over, any religious structure”. The tenor and tone of the judgment is akin to the Ayodhya preliminary judgments. Hindu fanatics planted idols to corroborate the existence of a temple beneath the Babri mosque.

The courts pay no heed to provisions of the Places of Worship Act, 1991 or Articles of the Constitution that bar them from dabbling in religious matters. It appears; soon they would force the Muslim to abide a Hindu code, as a common civil code is a joint demand of the RSS and the Bharatya Janata Party.

The Worship Act calls for maintaining all places of worship as they were on 15 August 1947. After the law was passed in 1991, some communalists filed a petition about the Gyanvapi mosque, claiming it was situated on a piece of land where there was a temple and that there should be an investigation.

Laws have no retrospective effect. As such the complaint was barred. The mosque committee and the UP Sunni Central Waqf Board opposed the application, which was rejected. The litigation went in appeal to the High Court. Despite this, a judge of a civil court has ordered a survey.  Maulana Khalid Rashid Farangi Mahli criticised the court order.  “The issue of Gyanvapi mosque and Kashi Vishwanath temple being raised now is very sad. The temple and the mosque are adjoining and Hindus and Muslims worship there… And this shows the Ganga-Jamuni Tehzeeb of our country. I feel the two structures together should be promoted as a mark of communal harmony and should not be raised as a controversy,” he added.

Long before the Supreme Court’s judgment, the Babri Masjid had been demolished by rath yatrees, chariot pilgrims, led by LK Advani and several other BJP leaders.  It appears the Gyanvapi mosque may suffer a similar fate.

All the 32 accused, including LK Advani, in the Babri Masjid demolition case were acquitted by the special CBI court in Lucknow on 30 September 2020, almost 28 years after the mosque was razed, showing how even the courts had become handmaidens of Hindu extremists,instead of staying aloof from extremism.

All those involved in rath yatra were acquitted. Emboldened by the Babri victory, fanatical Hindus now claim over 5000 temples, including Tejomahalay  Shiva temple (Taj Mahal), converted into mosques by the Moghul.

Chief Justice Ranjan Gogoi was inducted into the Rajya Sabha as quid pro quo for his `services’. The court under him delivered several judgments, including one on triple divorce.. Expect the Hindutva judiciary to enforce a uniform religious code for all religious communities as per the BJP agenda.

The main point of the acquittal is that the demolition incident was not pre-planned’. Actually the procession was well planned resulting in the death of 16 Muslims. If all the 32 accused were innocent then who were the culprits?

“…there can be no reason to hold that a mosque has a unique or special status higher than that of the places of worship of other religions in secular India to make it immune for acquisition by exercise of sovereign or prerogative power of the state.”

The dangerous assertion in the court’s verdict is “A mosque is not an essential part of the practice of the religion of Islam and namaz (prayer) by Muslims can be offered anywhere even in open.” This militates against a Muslim’s constitutional right to offer prayer.

The court formed its opinion on ‘inside-outside’ pilgrimage test. Hindus places of pilgrimage are all inside India. For Muslims, it is Mecca, Medina and the Dome of the Rock. For Christians, Jerusalem and places outside India? This test amounts to saying India is a Hindu country for the Hindu faith and that other religions (Christianity, Islam, etc) have lesser rights. The court’s thinking was fallacious. Mansarovar temple is in China while the revered shrines of Moinuddin Chishti and Nizamuddin Auliya are inside India.

Declaring mosques as inessential is dangerous. Already, Hindus forbid Muslims from offering prayers in the open. Even the prayergoers who spill on roads during Ramadan or during Friday prayers are brutally beaten. Even someone wearing a prayer cap may be picked up on a lonely street by a fanatic Hindu and beaten or killed. Haryana state has formally forbidden congregational namaz on roads or on vacant plots. Responding to the debate, the Chief Minister of Haryana, Manohar Lal Khattar, a staunch RSS member, argued that although law and order should always be given priority, “there has been an increase in offering namaz in the open”, and that “namaz should be read in mosques or idgahs rather than public spaces”.

In stark contrast, the courts consider temples essential to Hindu religion. They allowed menstruating women to pray at Sabrimala  Temple.

Hindu religion has no prophet, according to the encyclopaedia.  Courts rely on Hindu myths. How could a court determine the birth of Ram millennia ago? There is no evidence about Babur constructing a mosque in Ayodhya after demolishing a temple there. All early sources are mute. The first reference to Babri appears in a travel account by a Jesuit priest, Joseph Tiefenthaler, in 1768. The inscriptions, inside the mosque, often quoted in books on Ayodhya or Babur, were fake. The inscriptions show that the mosque was built in 1528–29 CE (935 AH) by Mir Baqi, on orders of the Mughal emperor Babur. But these inscriptions were fixed in the mosque 280 years after its supposed construction in 1528.

Babur did visit Gwalior temples. But, neither he nor his commander Mir Baqi (distinct from the Baqi of the masjid inscriptions), ever visited Ayodhya. Mir Baqi of Baburnama was never governor of Ayodhya.

L K Advani himself admitted on 30 September 1990: ‘No one can prove that it was the birthplace of Shri Rama.’ It is a matter of belief. Can this belief receive judicial sanction to the point where it can override others’ moral and legal rights?

CDetermination of title based on excavation opened up the Pandora’s Box of further excavations on flimsy grounds. Anyone may anytime complain to a court about a temple having been converted into a Masjid hundreds of years ago. BJP’s legislators have already demanded excavation of 3000 to 5000 mosques, including Delhi’s Grand Mosque. MP Sakshi Maharaj even offered to be hanged if idols were not found underneath the Jamia Masjid staircase. UP BJP’s president Vinay Katiyar said, “Why should we confine (ourselves) to Ayodhya, Kashi and Mathura? Why not talk of 5,000? All sites should be dug up to verify the claims on the pattern of Ram Janmabhoomi”.

Those still enamoured of secular India’s democracy should wake up. The Babri masjid verdict has threatened survival of mosques. During the British raj or Moghul period, Hindus did not question the existence of mosques. The court accepted the preposterous claim that god (Ram) was born at Babri site millennia ago. Shankaracharya’s Nyas (trust) originally owned only one acre of land near Babri site, the rest of the land (additional 42 acres of so-called undisputed land) was given to it on lease by then chief minister Kalyan Singh (an acquitted accused) in 1992 to develop a Ram Katha.

When the Quaid-e-Azam left India for Pakistan on 7 August 1947, Vallabhai Patel said, ‘As for the Muslims they have the roots, their sacred places and their centres here. I do not know what they can possibly do in Pakistan. It will not be long before they return to us’

The Babri case should make one thank the Quaid for Pakistan. All those involved in rath yatra were acquitted. Emboldened by the Babri victory, fanatical Hindus now claim over 5000 temples, including Tejomahalay  Shiva temple (Taj Mahal), converted into mosques by the Moghul.

Foreign Minister Shah Mehmood Qureshi has retracted a statement he made during an interview where he unexpectedly said that the revocation of Article 370...
Read more
- Advertisment -