The court adjourned the hearing of the case till Tuesday 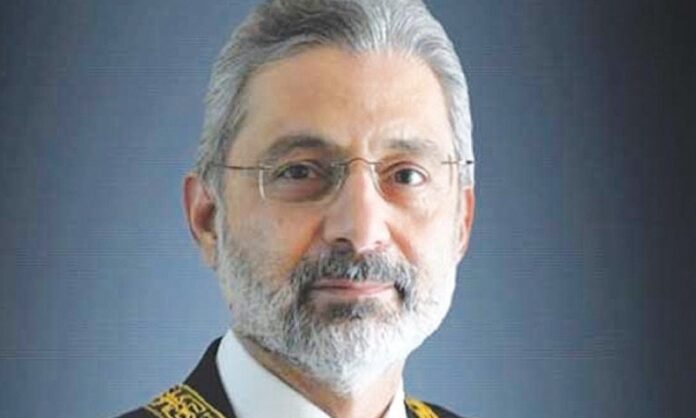 ISLAMABAD: The Supreme Court (SC) was informed on Monday that Justice Qazi Faez Isa is not named in the London property records.

On June 19, 2020, seven judges of a 10-judge bench quashed a presidential reference against Justice Isa but also ordered the Federal board of Revenue (FBR) to conduct an inquiry into the judge’s family members’ foreign assets and submit a report to the Supreme Judicial Council (SJC).

During the course of proceedings, Sarina Isa said that Justice Isa was not named in London property records.

She said that her husband was also not involved in the transfer of funds for London properties. She added that she was not party in the case but the verdict was passed against her and the children.

Justice Umar Ata Bandial responded that her name surfaced in the inquiry in the SJC, there was no doubt that she had been affected by the court decision while the case was not about illegality but about sources of income.

Sarina said that she had submitted the record of London properties before the apex court.
Justice Isa said that the tax commissioner conducted the inquiry while the court had sought the report from the FBR chairman. The FBR submitted a sealed report to the SJC, he added.

Following the order of the court, the SJC secretary submitted the FBR report to the court.
Addressing Sarina Isa, Justice Bandial said that she had to understand that the reference had been declared null and void by the court, because all her arguments were against the reference.

Sarina said she and her children were joint owners of London properties.
Justice Akhtar said that the real issue was the sources of funds.

Justice Afridi said that according to the FBR, the value of London properties was 751,000 pounds. The FBR had acknowledged that she sent that amount, he added.

The court adjourned the hearing of the case till Tuesday.