The House was adjourned to meet again at 2:00 pm on Thursday 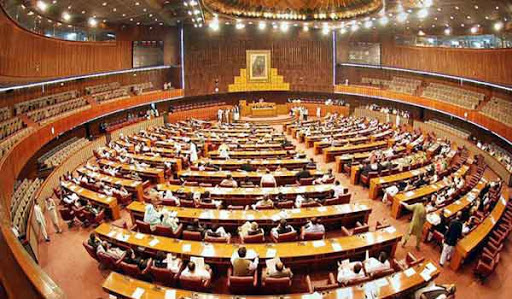 The lower house of the parliament met with NA Speaker Asad Qasier in the chair.
Speaking at the floor of the house, Minister for Religious Affairs and Interfaith Harmony Dr Noor-ul-Haq Qadri said that Prime Minister Imran Khan has raised voice for sanctity of the Holy Prophet (Peace Be Upon Him) at every world forum.

Qadri said that the government’s policy is talks and reconciliation and it is bound to bring the matter in the parliament. He suggested the formation of an All Parties Committee to tackle the issue.

The Foreign Ministry will submit its draft of law to this committee as it is up to the parliament and incumbent government to decide the foreign policy, Qadri stated. “We asked them to convince the committee about the nature of the draft,” the minister said.
“Unfortunately they given strike call on April 20 and it was the government’s responsibility to ensure the opening of the roads, motorways and the GT Road,” Qadri further said. “You could not even offer prayers five times while blocking roads,” he said.

The Islamabad Capital Territory Senior Citizens Bill, 2020, passed by the house, aims to socially and economically protect the senior citizens of Islamabad. In this respect it aims to establish a fund for these senior citizens as well as build and maintain old-age homes for the indigent senior citizens.

The other bill, Domestic Violence (Prevention and Protection) Bill, 2020, proposes a legal and institutional framework for the territorial jurisdiction of the Islamabad Capital Territory to ensure that victims of domestic violence are provided legal protection and relief and the perpetrators of this offence are punished.

The House was adjourned to meet again at 2:00 pm on Thursday.