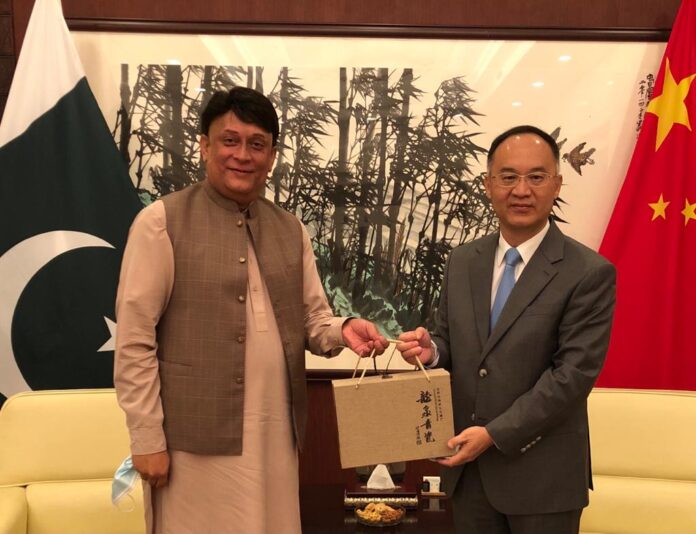 ISLAMABAD: Chinese Ambassador to Pakistan Nong Rong has vowed to carry forward the Sino-Pakistan friendship to new highs, saying the current year would add new impetus to the friendly bond between the two countries.

The ambassador expressed these views during a meeting with Sheikh Arsalan Hafeez, the vice president of foreign relations committee of the Pakistan Muslim League-Nawaz (PML-N), at the Chinese embassy.

The ambassador said that year 2021 is being observed as the 70th anniversary of diplomatic relations between China and Pakistan and the year would prove to be a new milestone in the history of Sino-Pakistan friendship.

He said China would also promote party-to-party relations between China’s Communist Party and Pakistani political parties, adding it is heartening to note that all the political parties of Pakistan fully back the China-Pakistan Economic Corridor (CPEC).

On the occasion, Sheikh Arsalan Hafeez said that the PML-N was instrumental in giving a new direction to the CPEC. He said that under the dynamic leadership of the ambassador, the Sino-Pakistan friendship would brace a new vigour and impetus.

Foreign Secretary Sohail Mahmood and the ambassador planted a friendship tree at the Chinese embassy’s compound as part of ongoing celebrations to commemorate the 70th anniversary of the establishment of Sino-Pakistan diplomatic relations.
They also reiterated the commitment to celebrate the 70th anniversary in a befitting manner. The plantation of the evergreen Deodar tree, which is also the national tree of Pakistan, depicted the spirit of the friendship.

Earlier on March 2, the 70th anniversary celebrations were jointly initiated by Foreign Minister Makhdoom Shah Mahmood Qureshi and China Foreign Minister Wang Yi in a virtual ceremony. Both the sides had planned a wide range of activities, spreading throughout the year, to mark the historic milestone and celebrate the evolution of the seven-decade long friendship, that had transformed into a time-tested “All-Weather Strategic Cooperative Partnership” despite vicissitudes of times and changes in the international and regional situation.