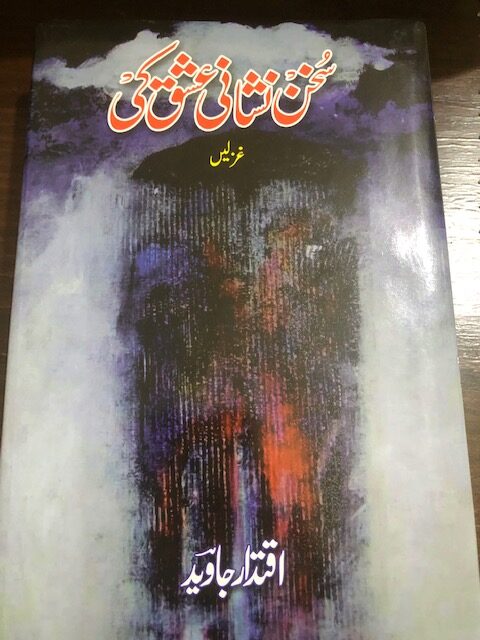 Iqtidar Javed is a prodigious writer and poet of both ‘ghazal’ and ‘nazm’. His present work, ‘Sukhan Nishani Ishq Ki’, is a collection of ‘ghazal’ in its most updated form–a mix of fine prosodic permutations lyrically homogenized in what may be termed as a post-modernistic phraseology.

On the other hand, the collection of ‘nazm’, ‘Rang Khabeeda Paray Hain’, by Dr Shahid Ashraf, a seasoned but versatile Urdu poet from Faisalabad (now based in Lahore), seeks to synthesise his creative vigour, experience and vision into an artistic whole signalling its innate contemporaneity as a literary composition.

This book by Iqtidar Javed carries a thought-provoking flap by reputed poet, critic and post-modernistic fiction writer, Musharraf Alam Zauqi, from Delhi, India. He thinks that a poet, of course a genuine one, is a ‘sculptor of pain’ in its divers forms. One would readily endorse his opinion that Iqtidar is focussed on ‘man’ as an organic entity of body (the extraneous form) and soul (the intrinsic substance). Iqtidar’s perception of ‘man’ seems to be partly experiential and partly metaphysical. The flap writer conceives a triangular colligation of science, universe and humanity in Iqtidar’s work, specifically his ‘ghazal’ that in his view could form a viable substructure for the modern day literature, too. Iqtidar has discovered a ‘new man’ in this perspective by representing the afore-mentioned three-dimensional subjects (science, universe and humanity) on a two-dimensional surface.

In his flap, Dr Saadat Saeed, another literary celebrity, also has viewed Iqtidar’s ‘ghazal’ in an ultra-modernistic perspective closer to post-modernism. He visualizes an amazing aura of imagism in Iqtidar’s work, which tends to refine and reinvigorate the modern sensibility on understanding and interpreting literature. He opines that Iqtidar Javed has quarantined his work against the onslaught of avarice, egotism, and fear and thus enthused it with values which transcend time and space and lend it a perennial worthiness.

Gratefully the book is dedicated to this scribe perhaps owing to our enduring relationship, based on mutual respect and trust, spanning a period of over two decades. Noted writer and poet Ilyas Babar Awan’s preface to the book is a veritable demonstration of his post-modernistic erudition, classic equivocation, and critical evaluation. He connects Iqtidar’s poetics to the renowned poet Zafar Iqbal’s who has admittedly invested ‘ghazal’ with a new outlook conflated with an empirical intertextuality bearing on a vast but varied range of existentialistic realities. Iqtidar consciously or unconsciously seems to tread Zafar Iqbal’s path of creativity in his ‘ghazal’.  Mehr Afroze’s ‘preview’ of the book from Karnatka, India, is also laudatory though based on an objective appraisal of the poet’s work.

The title of the book is symbolic in that it conforms to the kernel of the poet’s ‘ghazal’, that is love in its pristine chastity. The metrical scheme (‘bah’r’) of the ‘ghazal’ in this collection bears a variegated but innovative texture testifying to the poet’s grasp of the art of versification, prosody inclusive. The diction is commensurate with the implied meaning underlying each couplet in a ‘ghazal’. Themes touched in the collection vary from internal commotion to the humdrum in the environment, the fear of the pandemic, the doubts and uncertainties of the thinking souls, the agony of the downtrodden mass of humanity, the yearnings of unrequited love, and the hallucinations of a poetic imagination prognosticative of a ‘spring’ emanating from the ashes of an unceremonious ‘autumn’, are the staple themes of Iqtidar’s ‘ghazal’ contained in the instant collection. This assessment would lead one to predict a warm welcome of the book by discreet readers nay lovers of poetry in Urdu.

Shahid Ashraf is a well-known Urdu poet, academic, and literary analyst. The present book comprises a collection of his ‘nazm’.

Dr Najeeb Jamal and Dr Akhtar Shumar have contributed searching forewords to the book. The former terms Shahid Ashraf’s ‘nazm’ as an extension of a literary tradition encompassing the limitations of the individual’s physical capacity, possibilities of being, and the gyrating void between belief and conjecture. The dramatic element in his ‘nazm’ could also be ascribed to this phenomenon.

Dr Akhtar Shumar traces the presence of the supernatural, missing individuals, likes of a beggar, a coffin-bearing procession, and a private security guard in Shahid Ashraf’s poems besides soft feelings and a deeply observant eye envisioning ‘fructuous’ reveries of the coming events. The book contains some seventy poems on subjects, common and uncommon, like a stream, shawl, examination hall, tsunami, fog, the somnolence of colours, vestiges of time, fear of the pandemic, encroachments, the new year night, in the name of witches, an interview, the inbox, Manto remembered et al.

As a poet, Shahid Ashraf surveys life from a kaleidoscopic angle. He is thoughtful as well as feelingful. In his poems, generally he gives ‘powerful expression to the division in the modern consciousness caused by the contrast between the development of the moral sense and the dehumanized world picture’ provided by the discoveries of science and technology.