Alvi, Imran vow to follow in founding fathers' footsteps to make Pakistan a cradle of peace, progress, and stability 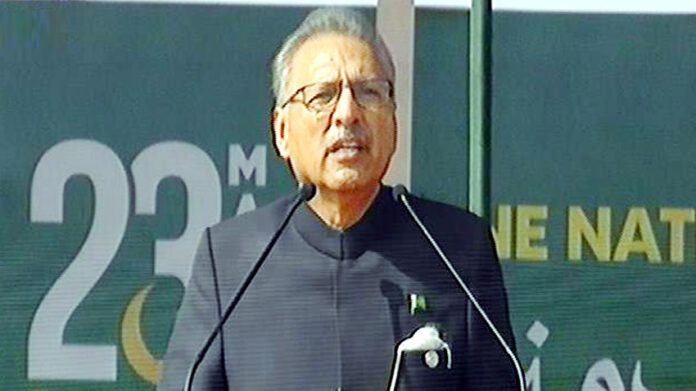 ISLAMABAD: President Dr Arif Alvi on Thursday said Pakistan is equipped to defend its territorial integrity and sovereignty and any misadventure will meet the most befitting response.

Addressing the military parade held in connection with Pakistan Day, the president said that the nation will defend its independence at all costs. However, Pakistan, he said, seeks peace, security and development in the South Asian region and has also taken measures towards that end.

He said that peaceful coexistence is the cornerstone of Islamabad’s foreign policy.

He said that the security situation in South Asia warrants that regional leadership reject the politics of hate, prejudice and religious extremism to guide it towards prosperity.

The president said that Pakistan wants to move forward with good intent and peace but warned that Islamabad’s desire for peace should not be misconstrued as a weakness.

Alvi also paid tribute to the country’s armed forces, stating the entire country stood shoulder to shoulder with them in the face of foreign aggression and on national issues.

“Our martyrs and our ghazis are our pride,” he said.

He also addressed the situation in Indian Occupied Kashmir (IOK). “The entire nation stands by their Kashmiri brothers and sisters in this hour of trial.”

The president also urged the international community to take notice of the grim situation in the occupied region.

He said that military operation, Raddul Fassad, destroyed the terrorism networks across the country. “The world also appreciates Pakistan’s successes in the war on terrorism.”

He also paid rich tribute to the leaders of the Pakistan Movement.

President Alvi further said that Pakistan seeks peace in Afghanistan and the world commends the efforts made by it for durable peace in the war-torn country.

He also stressed the need for harmonising with the latest technologies, including cyberspace and artificial intelligence to achieve the goal of development. He expressed satisfaction that the country’s armed forces are not lagging behind to lace themselves with these technologies.

Alvi said that the way the Muslims of the subcontinent achieved independence, the goal of development can also be achieved by renewing the pledge of Aik Qaum, Aik Manzil (one nation, one goal).

Turning to Covid-19, the president said that despite limited resources, the nation handled the situation with responsibility and discipline. He expressed confidence that Pakistan will also overcome this challenge but stressed that we need to adopt precautions.

He said that Pakistan-China cooperation and collaboration is getting stronger with the passage of time. He also expressed gratitude to China over the provision of the coronavirus vaccine to Pakistan.

President Alvi stressed the need for strengthening the Organisation of Islamic Cooperation (OIC) to fight the rising trend of Islamophobia in the world. He said that Pakistan has made every possible effort in this regard and will continue to play its proactive role in the future as well.

The parade, which is held on March 23 but was postponed due to “inclement weather”, was held at Parade Avenue in Islamabad.

President Alvi attended the event as the chief guest. Prime Minister Imran Khan was unable to attend as he is self-isolating after contracting coronavirus last week.

The contingents of the three armed forces and other security forces conducted a march past while fighter jets presented aerobatic manoeuvres, Radio Pakistan said.

The annual parade was postponed to today due to the forecast of “inclement weather and rain” on March 23 and 24, the Inter-Services Public Relations (ISPR) had announced Monday.

“The Joint Services Pakistan Day Parade will now be held on 25th March, 2021 as per program and timings already specified,” the statement had said.

According to notifications issued from the offices of Islamabad and Rawalpindi deputy commissioners, the twin cities are observing a local holiday in connection with the parade.

To facilitate the parade, Islamabad Traffic Police will restrict traffic on the Islamabad Expressway from Khanna Bridge to Zero Point between 5:00 am to 2:00 pm. The traffic police have specified alternate routes to facilitate traffic flow.

Due to coronavirus restrictions, a limited number of spectators were allowed to attend the event.

In separate messages, President Alvi and Prime Minister Imran paid tribute to the country’s founding fathers, vowing to follow in their footsteps to make Pakistan a cradle of peace, progress, and stability.

The two leaders ceased the opportunity to reiterate Islamabad’s support to the struggle of the people of Jammu and Kashmir.

Between 2008 and 2014, no parades were held due to an escalation in a conflict between the military and the Afghanistan-based Tehreek-e-Taliban Pakistan (TTP). In 2015, the military resumed the parade, declaring the militants were on the run since it launched Operation Zarb-e-Azb in 2014 to dislodge militants from the restive border regions.

Last week, Minister for Planning and Development Asad Umar said there was no plan to cancel or limit the parade.

“We have already discussed all arrangements and SOPs during the parade and it will be held with the usual zeal,” he told a local publication.

“However, we have observed that the provincial administrative units and Islamabad are not enforcing the SOPs strictly, therefore, they have all been directed to ensure their implementation.”