Imran announces health insurance worth Rs0.7 million for every household across Punjab 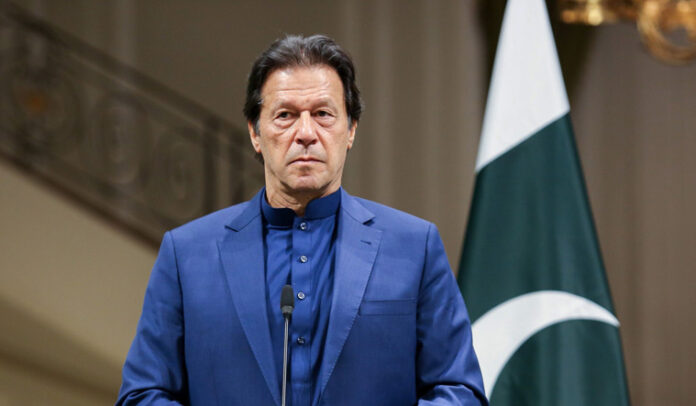 SAHIWAL: Prime Minister Imran Khan lauded Punjab Chief Minister Usman Buzdar and his team, including the Punjab chief secretary and inspector general of police (IGP), for nabbing the powerful illegal land occupants, some of whom had been backed by the former prime minister and his family.

“This is the real change when big dacoits are taken to task and brought to justice,” he said, adding that only those nations prosper that uphold the supremacy of law.

Addressing a ceremony on the cheque distribution under Ehsaas programme and the provision of tractors under Kamyab Jawan programme, he said he was pleased to see how the ‘palaces of land-mafia’ were demolished, adding that qabza groups were a curse and enemy of the state.

Hailing the Punjab CM, PM Imran said that Buzdar is not as outspoken as former chief minister Shehbaz Sharif, does not spend billions of rupees of public money on personal projects, and does not move in a convoy of 40 government vehicles.

Prime Minister Imran also said that the government was taking steps to ensure sustainable growth through an industrial and agro-based economy.

The premier stated that the government was collaborating with China to obtain learning techniques in the agriculture sector under the China-Pakistan Economic Corridor (CPEC).

PM Imran said that Pakistan, particularly Punjab, had immense potential in development in agriculture and livestock sectors, which could be exploited for the benefit of people.

He stressed that industrial units in Gujranwala, Sialkot and Faisalabad industries experienced boom even during the pandemic.

On the launch of Rs18 billion development projects in Sahiwal, he said that the government was determined to uplift the under-developed areas of the country.

PM Imran said that Sahiwal would be provided best facilities in the fields of health, education, road infrastructure and social welfare.

He announced that every household across Punjab would get health insurance worth Rs0.7 million by December 2021.

He added that the inauguration of a Rs400 million sewerage plant in Sahiwal would provide wastewater treatment, wherein the purified water would then be diverted towards irrigation of the adjoining forest area.

Prime Minister Imran said that reforestation was a priority of the government, adding that the Billion Trees Tsunami project was in full swing.

He said that the upcoming local government system would ensure power devolution and result in providing facilities to people at their doorsteps.

He said that the socio-welfare state of Medina was based on the principles of justice and equality for all.

PM Imran maintained that the government would introduce uniform educational syllabus across the country, which would mainstream all students especially those from a poor background.

He said that Ehsaas programme worked as a safety net for underdeveloped people, ensuring their free health, education and employment opportunities. Furthermore, the Kamyab Jawan project has been serving poor by providing them with easy loans, he added.

Speaking on the occasion, CM Buzdar said that the province’s agro-based ministries were efficiently working as per the vision of Pakistan Tehreek-e-Insaf (PTI) for the uplift of the common man.

He said that not only Sahiwal but also Chicha Watni and Harappa would be provided best municipal services.

Under the directives of Prime Minister Imran, he said, the provincial government would hold consultations with National Highway Authority for connecting Sahiwal with a motorway.

Adviser to PM on Youth Affairs Usman Dar said that as agriculture was the backbone of the country, the government was keen to uplift farmers through relief packages.

On the other hand, he said, exploitation of farmers in India was on the rise as hundreds took to streets in protest.

To get tractors in the government’s scheme, he said that farmers in the country could apply through a portal and assured transparency in distribution.

Special Assistant to the Prime Minister (SAPM) on Social Welfare and Dr Sania Nishtar said that Rs180 billion has so far been disbursed in the country under Ehsaas programme, with 504,000 households benefiting in Sahiwal.

She said that several segments under the umbrella of Ehsaas project including Emergency Cash programme, Ehsaas Kifalat and stipends for primary school students were being carried out in a transparent manner.

Adviser on Climate Change Malik Amin Aslam said that Sahiwal would get 30 water filtration plants and would benefit 0.5 million people and a forest area spread on 100 acres.

He said that Chicha Watni would be declared as a sanctuary to preserve forestation.

ISLAMABAD: The government would utilize funds amounting to Rs100 million, during the current fiscal year, to advance an ongoing project of the Petroleum Division...
Read more
NATIONAL

ISLAMABAD: Exploration and Production (E&P) companies, operating in different parts of the country, have collectively discovered 16 oil and gas reservoirs during the last...
Read more
NATIONAL

Sindh a land of rich culture, history: US Consul General

KARACHI: Consul General of US Consulate General Karachi Nicole Theriot, while felicitating on the Sindhi Culture Day, has said that Sindh is a land...
Read more
NATIONAL

December 4, 2022
ISLAMABAD: The exporters Sunday demanded immediate refunds of Rs 200 billion from Federal Board of Revenue(FBR) to avoid units closure amid liquidity crunch. Talking to...