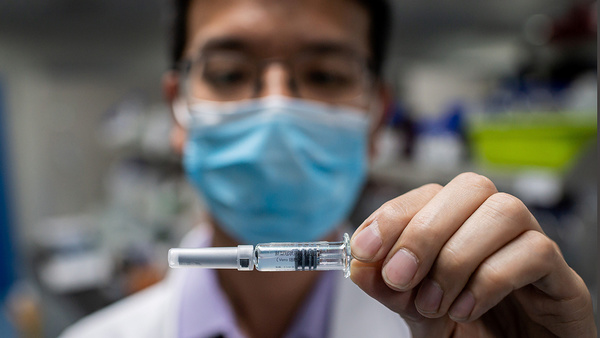 ISLAMABAD: As Pakistan struggles with a second wave of coronavirus infections, authorities on Monday green-lighted the emergency use of the Chinese anti-coronavirus vaccine produced by Sinopharm.

The Drug Regulatory Authority of Pakistan (DRAP) has approved the vaccine for emergency use across the country. The decision was taken during meetings held between January 14 and 18 after reviewing vaccine results data submitted by the National Institute of Health (NIH). The development allows federal and provincial governments, and the private sector to import the Chinese vaccine.

The anti-coronavirus vaccine is developed by China National Biotec Group (CNBG), a Sinopharm subsidiary. On December 30, Sinopharm announced that phase-III trials showed the vaccine was 79 per cent effective.

But the United Arab Emirates, which approved the vaccine for emergency use in December, said interim results of Phase-III trials showed 86 percent effectiveness. The vaccine has been approved for use in China, Jordan, Egypt, Bahrain, and Serbia.

This is the second vaccine approved for emergency use in Pakistan. Last Friday, DRAP green-lighted use of AstraZeneca-Oxford vaccine. Pakistan is currently running phase-III clinical trials for CanSino Biologics’ vaccine candidate, Ad5-nCoV, led by the government-run National Institute of Health. The Drug Regulatory Authority of Pakistan (DRAP) had given the approval for urgent-use of the British Covid-19 vaccine.

Pakistan is also running phase III clinical trials of another Chinese vaccine from CanSino Biologics’, led by the National Institute of Health.

AstraZeneca has been a British-Sweden joint multinational pharma company, which has produced the vaccine in collaboration with Oxford University. The vaccine, approved by the British Medicine and Healthcare Products Regulatory Authority, is said to be effective for people of all age groups and could be stored in home refrigerators.

The coronavirus pandemic claimed another 46 lives in the past 24 hours, surging the overall death toll to 10,997, said the National Command and Operation Centre (NCOC) on Monday.

According to the latest data provided by the NCOC, the Covid-19 tally climbed to 521,2110 after 1,920 new coronavirus cases were reported. In the past 24 hours, as many as 1,589 patients have recovered from the virus and the total count of active cases is 34,986. Overall 475,228 people have recovered from the deadly disease so far.

A total of 2,348 patients were stated to be in critical condition. A total of 37,949 tests were conducted across the country on Sunday, while 7,405,571 samples have been tested so far.

Punjab health authorities reported 560 new coronavirus cases, taking the provincial tally to 149,782. The virus claimed 23 lives in a day and the death toll stands at 4,432.

Punjab Health Minister Dr Yasmin Rashid on Monday rejected the rumours about ministers getting Covid-19 vaccines and clarified that the vaccine has not arrived in Pakistan so far.

Dr Yasmin, while, addressing a press conference, said that rumours are circulating about the administration of Covid-19 vaccines to the ministers. She clarified that the vaccines have not arrived in the country so far; however, she said that the provincial government completed arrangements for launching the vaccination drive. “We would try our best to get the best vaccines for our people.”

While elaborating the preparations regarding the forthcoming Covid-19 vaccination drive in the province, she said that the government established 20 new laboratories amid the pandemic and PC-I of five more labs was also finalised.

“It would be very important to make preparation for the storage of vaccines. 2,385 refrigerators for vaccines are functional in each district. We have prepared 76 master trainers for vaccination and the vaccines will be administered to the frontline health workers in its first phase before its administration to the elderly citizens aged above 65 during the second phase,” she said.

She said that cold rooms have been established everywhere for the preservation of vaccines, whereas, the vaccination facility will be available at 189 spots. The health minister urged the citizens to strictly follow the standard operating procedures (SOPs). She praised local authorities for maintaining the strict monitoring of Covid hotspot areas.

To a question, Dr Yasmin said that Pakistan Muslim League Nawaz (PML-N) supreme leader Nawaz Sharif had made a commitment with the provincial government to receive medical treatment abroad.

“I had contacted Sharif’s physician and asked him to send his medical reports. However, we have received no report for one year, but they kept insisting for his ailment whenever being asked to return. If he is so ill, then he cannot deliver back-to-back speeches like this.”

Meanwhile, the Punjab government has imposed smart lockdown in more areas of the provincial capital Lahore and Gujranwala due to a rise in Covid-19 cases.

The Primary and Secondary Healthcare Department of Punjab notified imposition of smart lockdown in 17 areas of Lahore and three in Gujranwala.