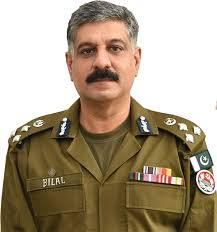 LAHORE: Additional IG Bilal Siddique Kamyana on Tuesday assumed the charge of the post of Capital City Police Officer (CCPO) Lahore after his notification was issued by the Punjab government the last day.

Bilal Siddique Kamyana, has also experience of working in provincial metropolis as SP in Operations, Investigation and Security wings.

CCPO Bilal Siddique Kamyana on his arrival at Capital City Police Headquarters, was welcomed by SSP Admin Atif Nazir and other senior police officers who presented him bouquet.

Bilal Siddique Kamyana was presented guard of honor by a fresh contingent of police personnel on his arrival.

After assuming charge of the post, the CCPO has committed to resolve the problems of citizens by providing justice to them at Police Stations.

“Maintenance of law and order, free registration of FIRs, merit based transparent investigation along with crime control would be my top priorities”, he added.

He said that he would take all possible measures for the welfare of Police officers and officials along with families of the martyrs.

He said, he would utilize all resources to give relief to the people along with chalking out a comprehensive plan to improve the morale of the Police forces and build positive image of the department as well as improve the conditions of the Police Stations.

“It would be our mission to make Lahore the center of peace so that people could spend their life calmly with complete sense of protection” Bilal Siddique Kamyana vowed.

The culture of public friendly police would be promoted so that people could visit police stations for the rederessal of their grievances without any fear and hesitation, he added.

“Projects related to IT, public friendly approach of Police and community policing will be continued and further improved to ensure protection of life and property of people according to our agenda,” he concluded.