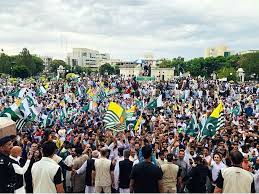 ISLAMABAD: More than 40 elected councilors along with civil society representatives have called for a financially and administratively empowered local government system in AJK. They have also urged the government to hold training and capacity-building workshops to enable the elected councilors to discharge their responsibilities.

These views were shared at a workshop organized by the Centre for peace, Development and Reforms, aimed to analyze the needs of the recently elected councilors.

Speaking on the occasion, Executive Director of the Centre for Peace and Development Initiatives (CPDI) Mukhtar Ahmed Ali said that the local government representatives have to play a crucial role in the fast-track development of AJK through their own innovative ideas rather than waiting for government support. He advised the councilors to set measurable goals in the form of a five-year plan for their respective constituencies.

Public policy expert Dr. Waqas Ali underlined the need to improve the empowerment component of our elected officials so that they feel a sense of accountability as well as duty. Afraz Gardazi, an elected councilor from Bagh, said that people have attached huge expectations to the elected representatives and we have to prove our leadership qualities by fulfilling the citizens’ expectations. Amir Khurshid, a councilor from Rawalakot, emphasized the need to hold capacity-building workshops in all district headquarters of AJK to educate the newly elected LG’s councillors about the laws and rules of business.

Muhammad Ramazan Chugtai, a councilor from Mirpur, said that people at the local level should be well informed of their rights, the local government’s budget, and local development initiatives.

Dr. Ishrat Sajjad recommended that women should be involved in the decision-making process. Without women’s active participation, AJK cannot realize its true potential.

Amir Rafiq, a councilor from Rawalakot, lauded the AJK government for holding the LGs elections after a long break of 32 years. He hoped that all funds and powers will also be delegated to the LGs councilors soon.

Abid Siddique, the Chief Editor of the Daily Dharti, advised the LG councilors to improve their liaison with the local authorities in order to complete the current projects on fast track and avoid confrontational behaviour in the interest of their voters.

Rashid Afraz, a councilor from Rawalakot, highlighted the importance of transparency in all local government institutions to make them financially self-sufficient. He was of the view that huge revenue is being generated in all towns and cities which mostly goes into the pockets of the corrupt.

Sharing his experience, Javed Arif Abbasi, a district councilor from Dhirkot, said that with the help community, he has completed several projects in his constituency. However, LG’s rules of business have yet not been finalized which is a cause of concern for everyone.

Ms. Fatima Anwar, Ms. Afifa Awais and Ms. Mehwish Bakht appreciated the fact that LG elections were held peacefully and a sizeable number of women participated in the elections, and dozens of whom will be elected on reserve seats soon which will significantly enhance women’s participation in the political arena.

Combating deforestation can be aided by empowering local governments but it works best when local users actively engage with their representatives, said Irtaza Muhammad.

Saeed Imtiaz, a councilor from Muzaffarabad, urged the government to decentralize all administrative powers and allow the elected councilors to run local affairs, envisage and implement developmental projects.

Azad Kashmir, like Pakistan, is experiencing severe climate change-related difficulties and is considered to be one of the most susceptible regions in this regard. The primary tactic for addressing climate change threats is the strategy of engaging the knowledgeable and empowered local government members in planning and action, said Bilal Amjad.

Concluding the event, Ershad Mahmud, Executive Director CPDR, said that their organization has offered a wide range of training opportunities, targeted specifically to the demands of the local government. CPDR can also offer training sessions for several tiers of grassroots representatives based on their preferences. He further emphasized that the dissemination of authority from local administration to elected representatives is a long-drawn process, requiring patience and persistent lobbying aligning with the public demand. It should be kept in mind that the influence of nearly 3000 elected councilors cannot be further from being unnoticed by those in power.`