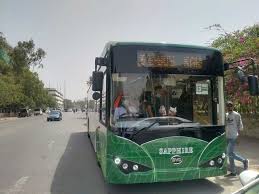 KARACHI: The test drive of Pakistan’s first electric bus service was conducted in Karachi on Monday under Phase 2 of People’s Bus Service.

Sharjeel Memon, speaking to the media on the occasion, said that under the second phase of the People’s Bus Service, test drive of European standard environment friendly buses was carried out while regular bus service would start in coming 10 days.

“We are trying to set up a manufacturing plant of electric buses in Karachi and negotiations were under way with companies from China and Europe as well as local companies,” Memon said and added that it would lead to local manufacturing and development in Sindh besides creating employment opportunities.

The minister said import of electric buses to Pakistan cost double than hybrid diesel buses and by setting up a plant in Karachi the buses could be available in the country at a lower price.

Responding to a question, he said that PPP Sindh government was focusing on the development of Karachi, roads of the city were being improved and Administrator Karachi Barrister Murtaza Wahab was personally monitoring all development works.

To another question, he claimed that fare of People’s Bus Service and Orange Line were reasonable and lower then private transport vehicles while service was better. Fare of electric buses will be even less, he added.

He said that Karachi has honour of starting the first electric bus service in the country and these services would be extended to other major cities of Sindh as well.

Project Director NRTC Soheb Shafiq briefed at the occasion that electric buses had total capacity to accommodate 70 to 90 passengers with 32 seats for general citizens and 2 seats for special persons.

These buses are charged in 20 minutes and are capable of covering a distance of 240 km in a single charge, he informed adding that a charging system has been installed at the UP Mor Bus Depot to charge the buses.

February 7, 2023
Work ethics refers to a set of moral principles, values, and attitudes concerning how to behave at work. The discourse of labour in Pakistan...