The path in Peshawar was a sign of lack of confidence 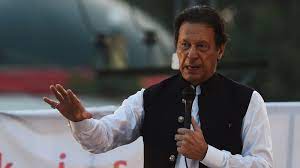 On October 4, former Prime Minister Imran Khan led his followers to swear, in an oath-taking ceremony in Peshawar. Khyber Pakhtunkhwa’s former Governor Shah Farman read out the oath and the attendees repeated the words: “We will uphold the constitution and protect it. We will consider the party’s movement for Haqeeqi Azadi (real independence) as jihad (holy war), and we will render all kinds of sacrifices for the cause.”

The apparent objective of the oath was to make the party workers bound to join in the Haqeeqi Azadi March on Islamabad, whenever the chairman Pakistan Tehreke Insaf (PTI) would give a call. That is, the oath taking was a preparatory step to make the march successful. The hidden objective of the oath, however, was to reassure the Chairman PTI that he would seek the shored up political support on the ground.

The scenario was interesting because, in the past, Peshawar had not disappointed the PTI. It was like overkilling an issue. For instance, on May 25, it was Lahore (and not Peshawar) that failed to meet the expectations of the PTI. In Punjab, in the PTI ranks, there is no leader of a high stature that could be instrumental in stirring Lahore into marching on Islamabad. It is an uphill task. Perhaps, the Lahorites have also measured well the length of the GT Road well, besides the time and the effort that would be consumed.

In Lahore, Mian Mahmood ur Rasheed, Mian Mohammad Aslam Iqbal, Shafqat Mehmood, Andleeb Abbas, and Dr Yasmin Rashid are all minions politically. Individually, they may be popular in their respective constituencies, but not out of those electoral confines. Hitherto, they have never mobilized the masses to lead Lahore on their own. They have kept hiding behind the excuse of police highhandedness which they declare was sufficient to sabotage the march. They remained handicapped to the popularity of the PTI Chairman, but then Khan never led a long march on his own from Lahore. In 2014, he had the support of intelligence agencies and Allama Tahir-ul Qadri’s party. This time, however, the PTI might be thinking that Peshawar would come out to support the march under the local political leaders, whereas the PTI Chairman would take the party followers from Lahore along.

It seems that the PTI learnt wrong lessons from its dharna (sit-in) politics in 2014. The PTI thinks that its Band Baja coupled with rowdy street hooliganism can serve the purpose of overthrowing a settled legitimate regime in Islamabad. The PTI is overestimating its size and strength. The PTI is deliberately replacing argument and debate with street excitement. The act is a sheer denial of parliamentary democracy. When democratic options are available, there is no sense in resorting to undemocratic deeds.

Generally, the loss of faith may be the major factor necessitating the oath-taking ceremony for workers and leaders alike. The PTI chairman apprehends that he might not garner sufficient desirable support from the PTI’s hub, Peshawar, in trying times. Peshawar might be a beginning; the turn of Lahore could be next– to reassure the PTI Chairman of wholehearted participation.

The PTI is generally known for introducing innovations to politics. Band Baja was one, the oath politics is now another. The use of loud musical instruments accompanied by rousing songs-cum-slogans has filled the streets with the effulgent youth glowing with the prospects of Azadi (freedom). The famous Islamic touch adds spice to the political flavor.

The oath-taking by raising hands showcased a canny similarity with that of Nazi Germans who followed the path laid by their leader, Adolf Hitler. It was not that Hitler could convince the German followers of his argument; it was that Hitler needed unchallenged unadulterated obedience from his followers. That is, the followers had to surrender their freedom of thought to the will of Hitler.

This was a spell of sheer subjugation which eventually wrecked not only Germany itself but also the rest of Western Europe. Hitler is still a recipient of invective and slurs from the Europeans. A stream of expletives still haunts the Germans. Lying in the consequence is a lesson to learn for the PTI.

Unquestioned subordination destroyed both Germany and Europe. History refuses to support the subjugation act. History replaced subjugation with democracy in Germany to let the Germans think with open minds and question the intent of a leader. Apparently, the PTI is launching a real freedom march but after rendering the minds of its followers closed to debate and dissent. The PTI demands an unflinching loyalty from its supporters to overturn the regime that has ensconced itself secure– both constitutionally and legally– in Islamabad.

In the PTI’s delivered oath, the major motivator is the word of jihad, which plays on the sentiments of the religiously conservative Muslims of the province. Their sentiments were exploited several times in the past. Recently, in the War on Terror, a substantial number of the motivated either laid their lives in Afghanistan or ended up in internment centres in Pakistan. The survivors were declared unsuitable for living a civic life.

Certainly, stirring people with the religious touch of jihad is a dangerous tool, which may boomerang on the thrower when the political jihadis get to know of their exploitation for meeting the exploiter’s political objectives. The jihadis are known for demanding their share of the pie. Failing to find which, they can turn their guns on their benefactors. Ask those who are keeping the jihadis interned.

It seems that the PTI learnt wrong lessons from its dharna (sit-in) politics in 2014. The PTI thinks that its Band Baja coupled with rowdy street hooliganism can serve the purpose of overthrowing a settled legitimate regime in Islamabad. The PTI is overestimating its size and strength. The PTI is deliberately replacing argument and debate with street excitement. The act is a sheer denial of parliamentary democracy. When democratic options are available, there is no sense in resorting to undemocratic deeds.

It is not known when the PTI Chairman announces the Haqeeqi Azadi March to mobilize his followers to overawe Islamabad, but it is known that the PTI has to surmount two stumbling blocks: first, how to reach D-chowk, after breaching the legally assigned confines of G-9 or H-9 park, Islamabad; and second, how to convince the rest of the Pakistanis that street agitation was the only option left with the PTI to achieve its objective of regime change, even under the rubric of demanding early elections.