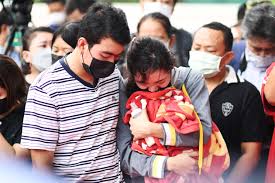 ISLAMABAD: Prime Minister Shehbaz Sharif on Friday expressing deep shock over the killing of three dozen people including 23 children in Thailand offered his condolences over the incident.

“It could not get more gruesome than this. We are deeply shocked and hurt to learn about the killing of three dozen people including 23 children and infants in Thailand,” he said in a tweet.

Expressing his profound grief, he said. “Have no words to condemn this barbarity.”

PM Sharif extended his deepest condolences to the bereaved parents and people of Thailand.

Foreign Minister Bilawal Bhutto Zardari in a tweet also expressed his shock over the incident.

“Shocked at the loss of innocent lives in a shooting at a nursery in Thailand. Our thoughts and prayers are with the bereaved families,” he said.

It is pertinent to note that a former policeman killed 34 people, including 23 children, during a knife and gun rampage at a daycare centre in northeast Thailand on Thursday, police said, before later shooting dead his wife and child at home and turning his weapon on himself.

In one of the world’s worst child death tolls in a massacre by a single killer in recent history, most of the children who died at the daycare centre in Uthai Sawan, a town 500 km (310 miles) northeast of Bangkok, were stabbed to death, police said.

Police identified the attacker as a former member of the force who was dismissed from his post last year over drug allegations and he was facing trial on a drugs charge.

The man had been in court earlier in the day and had then gone to the daycare centre to collect his child, police spokesperson Paisal Luesomboon told broadcaster ThaiPBS.

ISLAMABAD: The Government of Japan extended its support to the Pakistan Polio Eradication Programme by providing more than US$ 3.87 million as a grant. The grant will...
Read more
NATIONAL

December 8, 2022
ISLAMABAD: Executive Director of United Nation’s Office on Drugs and Crime (UNODC) has stressed upon the need to double global efforts to tackle corruption...