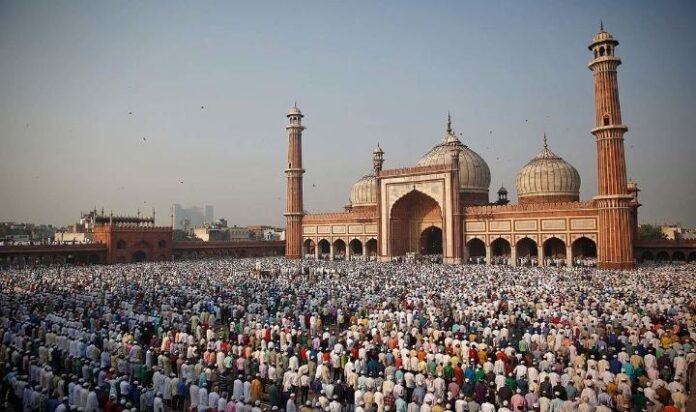 The Indian Muslims live in a state of constant fear. Ostensibly secular, India has banned conversions from Hinduism to another religion. The Love Jihad law in some states persecutes interfaith couples. India’s “secular” courts encroach upon the Muslim way of life. India’s Supreme Court, declared that a mosque is not essential to the Muslim mode of worship. Muslims offering prayer in open space at Gurgaon were mercilessly beaten up. FIRs were registered against Muslims for offering prayer in a private house. Prayer-goers wearing a prayer cap are stalked and beaten.

Babri Mosque was demolished by a Hindu mob led by BJP leader LK Advani. The court acquitted all the accused. Besides, it accepted the demolition as a fait accompli and allowed the mosque to be razed and a temple to be built on the site (now three-fourths complete). Agreeing to Hindus’ demand, a court allowed Hindus to pray within the Gyanvapi mosque. Besides excavation of the ablution place was showed to find a Shiva (god) ling for carbon dating. During riots, scores of mosques were bulldozed despite a restraining order by India’s Supreme Court. No action was ever taken against temples built on encroached lands. Thousands of loudspeakers were removed from mosques on plea that they disturb the sleep of people living in the vicinity. Hijab in schools was outlawed.

Fearful Muslims joined the so-called Muslim Manch, a cosmetic branch of the RSS, to seek a modicum of security from rabid RSS members. The RSS uses the Muslim Manch to distribute pamphlets during the RSS’s congregations. Yet, RSS chief Mohan Bhagwat has, in a recent speech, frowned upon Muslims who call Hindus Kafir.

Besides persecuting the individual Muslims, the Indian government has, in tandem with the RSS, unleashed a sustained propaganda campaign alleging that Dawat-e-Islami (Ilyas Qadri) and Peace TV (Zakir Naik) spew hate speech to incite Indian Muslims to “terrorism”.  India took no notice of hate speech by participants of the Hindu religious assembly at Haridwar.

The fact is that Dawat-e-Islami is a non-political non-violent religious organisation inspired by Sufi tradition. There is no evidence to corroborate India’s allegation that it is a terrorist organisation. It  is a peaceful organisation that runs several educational Institutions in Pakistan and abroad. Besides, it offers several online courses in Islamic Studies. It  has been running the Madani channel since 2009.

India has banned the Muslim organisation, Popular Front of India, for five years. Besides, it has launched a disinformation campaign against Pakistan-based Dawat-e-Islami. But it initiated no action on revelations by a former Hindu militant.

Dawat-e-Islami has 2,600 workers who preach Islam in 194 countries. It is popular not only in Pakistan but also in Britain, Spain, Greece, Bangladesh and several other countries. It runs a chain of 3,790 religious seminaries with enrollment of 1, 69,000 boys and girls. These seminaries charge no fee.

India has banned this social-welfare organisation for five years. The Hindutva proponents (VHP et al) have been making shrieking calls to get this organisation banned. At the Friday congregation, it was prevented from offering its point of view. In a nationwide crackdown several PFI leaders have been arrested. During the nation-wide crackdown on the PFI, India did not find a single firearm. At present, the PFI, which has a strong presence in Kerala and Karnataka, is active in more than 20 Indian states.

Formed in 2006, the PFI along with its affiliate Social Democratic Party of India (SDPI) describes itself “as a non-governmental social organisation whose stated objective is to “work for the poor and disadvantaged people in the country and to oppose oppression and exploitation”. PFI founding member Siddaramaiah denies any connection with the Hindu tailor Kunhaya Lal’s murder. He stressed that the PFI is a bulwark against rising Hindutva influence.  According to PFI chairman O.M.A. Salam, the PFI has about 400,000 cadres across India. The PFI, he added, also has supporters and sympathizers “running into millions” who participate in “programmes” but shy away from membership because of the organization being “constantly on the radar”.

The Congress, otherwise portrayed as a pluralist party, also had joined the “ban bandwagon”. Congress labeled the PFI “B team of the BJP”. Congress’s abhorrence is understandable. The PFI could split or literally snatch away Muslim votes from Congress.

Without a shred of corroborative evidence, the PFI is accused of receiving funds from foreign entities. They receive funds through appeals at prayer congregations. On a single Friday evening, in a matter of 15 minutes, PFI members raised Rs eight milllionto fight the Hadiya case just by standing outside mosques.

Why the PFI irks India

The PFI’s legal interventions won judicial justice in many cases, including in the Hadiya religious-conversion controversy, the Muzaffarnagar riots, and the lynching of Tabrez Ansari in Jharkhand.

The PFI performs a host of jobs “from getting FIRs registered under the right sections to following up with investigating officers, drafting appeals, preparing legal documents, and motivating victim families to keep up the legal battle; the PFI’s huge legal team does a lot of backend work,” The PFI hopes to be able to groom the next generation of legal and media minds by sponsoring students in these fields.

In the educational field, the PFI is trying its best to motivate Muslim kids to enroll in education. Through its efforts, the rate of drop-outs has been reduced.

It is not the PFI but its affiliate SDPI that is active in the political arena. The PFI’s student wing, Campus Front of India (CFI), is confronting the ABVP (RSS’s student wing) in Karnataka. It kept up the momentum of the hijab protests.

In a judicial affidavit, Yashwant Shahdev Shinde, formerly associated with Hindu militant organisations, unmasked the Hindu terror organisations. Shinde had done the preliminary training class of RSS (Prathmik Sangh Shiksha Varg) in 1994. He completed the second level of the RSS training class in 1996/97 at Chandigarh. Then he was appointed as the “Pracharak” of Riyasi Tahsil in Udhampur district of Jammu.He returned to Mumbai in 1999 and was made the Chief of Bajrang Dal.

India has banned the Muslim organisation, Popular Front of India, for five years. Besides, it has launched a disinformation campaign against Pakistan-based Dawat-e-Islami. But it initiated no action on revelations by a former Hindu militant.

The RSS and chief ministers of Assam and Uttar Pradesh had called for banning the PFI. It is nightmarish for the BJP ruled government to visualize that the PFI may one day supplant the traditional Muslim leadership impervious to the Muslims’ woes.  Despite mounting allegations against the PFI and its affiliates, India’s sprawling investigative agencies have not been able to prove that the PFI, as an organisation, is wedded to terrorism.

December 9, 2022
The latest report of Bertelsmann Stiftung’s project ‘Shaping Change – Strategies of Development and Transformation’ for 2022 about Pakistan confirms that the state’s monopoly...