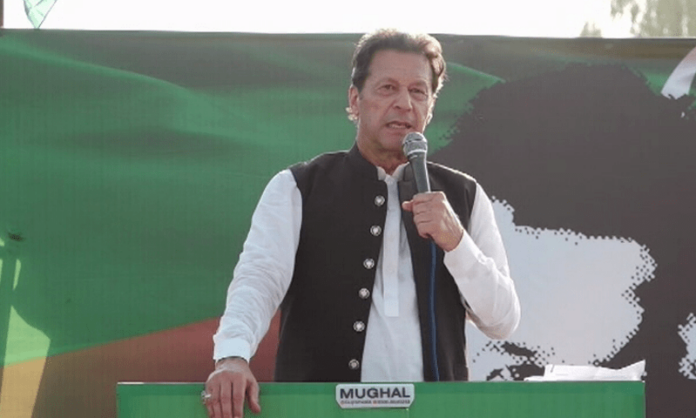 MIANWALI: Former prime minister and PTI Chairman Imran Khan said on Friday accused the ruling Pakistan Muslim League-Nawaz (PML-N) and its leader Maryam Nawaz of releasing  ‘doctored audios’ to malign him, saying that creation of “deep fake videos” is not a big deal.

He also alleged that “four individuals” were hatching a plot to assassinate him over blasphemy allegations, warning that a video containing names of the ‘conspirators’ will be released if anything happened to him.

He said PML-N leaders — Maryam Nawaz, Marriyum Aurangzeb and Javed Latif — accused him of committing blasphemy in a bid to incite religious hatred against him.

“What was the game behind this [allegation]… four individuals sitting behind closed doors decided to get me killed over blasphemy allegations,” he alleged.

Addressing Prime Minister Shehbaz Sharif and Interior Minister Rana Sanaullah, Imran said: “You and your handlers can prepare, but remember the Kaptaan will scuttle all your plans.

“You can’t stop us now, you will have to hold elections.”

He also said that even though the coalition government had gathered on one side with Chief Election Commissioner Sikander Sultan Raja, they all cannot beat the PTI, “even if they try to rig elections”.

“The Kaptaan standing before you is the man who went to India and defeated them on their home ground,” Imran added.

“If I got killed then they will say a religious fanatic killed him [Imran] because he had committed blasphemy.”

Imran said he has recorded a video, containing names of conspirators which will be released if anything happened to him. “The nation will not forgive them,” he warned.

Going on, Imran said that he had decided to “sacrifice my life” for the freedom of the country. “They are trying to scare us by threatening to throw us in jail.

“Now, I will start a Jail Bharo Tehreek (fill prisons movement). There are millions ready to go to jail, don’t try to scare us,” he asserted.

Imran also called the audio leaks from the Prime Minister’s Office a “grave security concern”, saying that it was a “matter of worry” that the phone lines of the prime minister were being tapped.

“I ask our intelligence agencies […] your job is to protect the PM Office and if all these things are leaked, this your responsibility. You should understand [this] instead of threatening people and [indulging in] political engineering.”

Reiterating his call for ‘ultimate call’ against PML-N-led coalition government, Imran in today’s rally asked his supporters to prepare for the ‘Azadi March’.

Imran said he could give call for long march to Islamabad anytime soon. However, he said that long march was a part of his ‘real freedom movement’ and he was planning some other events which “no one has ever seen before”.

The PTI chairman then asked them to prepare for the Azadi March, stressed that his planning for the protest this time was well-thought.

“The march on Islamabad is just one part of it and the Kaptaan is planning other things that no one has ever seen before,” he avowed.

Pakistan ‘disappointed’ over inclusion in religious violators list by US

ISLAMABAD: The government is likely to remove Aamir Khan, Chairman Securities Exchange Commission of Pakistan (SECP) while Akif Saeed is expected to be the...
Read more
- Advertisment -