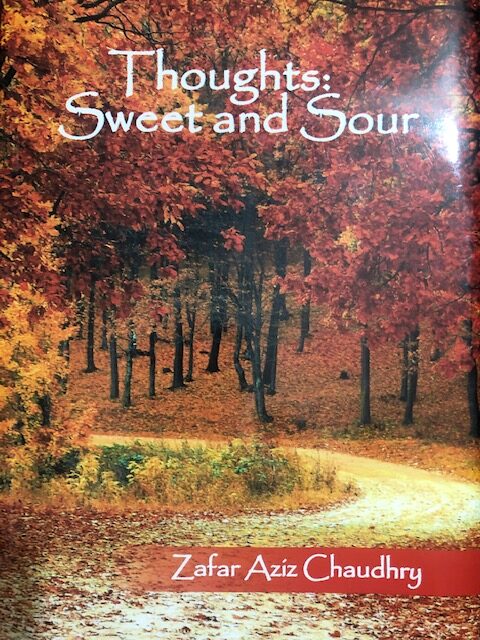 Title: Thoughts: Sweet and Sour — Author: Zafar Aziz Chaudhry
Zafar Aziz Chaudhry is a veteran English essayist with three anthologies of essays, including the present one, to his credit. He is widely acknowledged for his candid but considered and well-judged opinions on contemporary socio-political and economic issues — both topical and atopical.

He is a regular contributor to many an English newspaper/journal. Zafar Aziz Chaudhry’s distinguished career as a public servant in the erstwhile provincial civil service (PCS) afforded him an opportunity to view, adjudge, and deal with the impish bureaucratic
scenario in the province from a very close angle which ultimately led to ripen and mature his outlook and enrich his vision. His essays on sundry topics, as contained in the instant volume (2022) as well as his previous ones viz. ‘Moments in Silence’ (2018) and ‘My Inner Landscape’ (2020) will bear ample testimony to this observation.

The book contains a collection of fifty-seven (57) essays, contributed periodically to an
esteemed Lahore English daily, divided under four sub-heads namely Perspectives,
Personalities, Commentary, and Political. The subjects broached in the essays are diverse but highly engaging for their relevance to the zeitgeist of our time.

It would be worthwhile to mention some of them here: the third gender in Pakistan; feminism in Pakistan; the fad of unhappiness; fate of minorities; the future of written books; the ruse of family planning; the plight of senior citizens; the new global challenge (COVID-19); the world after Coronavirus pandemic; the phenomenon of hope; the spirit of time; an outstanding modern epic by Ejaz Rahim; lack of sportsmanship; the distinction of Faiz as a literary icon; the Venus of Indian cinema (Madhubala); from rags to riches (Malik Riaz Hussain); racial violence in America; science and religion; China outwits America; China’s phenomenal economic progress; some common foibles in national politics; a critical review of Imran Khan’s political stance; local government in Pakistan et al.

Zafar Aziz Chaudhry writes in a lucid style. His ideas that he calls ‘thoughts’ are perspicacious, to say the least, with their roots in reason and wisdom. He looks at both sides of an issue, analyses it threadbare and comes out with a cool logical inference to convince and enlighten his reader. The concept of ‘permanence of change’ is the mainstay of his philosophy of life.

Normally newspaper columns are regarded as ‘timely’, not ‘timeless’. In Zafar Aziz Chaudhry’s case, his columns seem to carry a perennial appeal as he treats his subject not cursorily but minutely in the manner of a dedicated researcher probing into the harsh incompatibilities of existence which are otherwise inexplicable.

A few excerpts from these essays would explain the logic or ‘illogic’ of the foregoing
observations: ‘International development indicators show that Pakistan has been overtaken in all development projects like health, education and poverty-reduction by even countries like Uganda and Ghana, which is indeed a matter of shame. With more people to feed, the
government will have to create more opportunities. If nothing is done to contain the
population growth rate, the economy will reach a breaking point.’ (Wither goes the bygone
family planning?)

‘ …… Ejaz Rahim’s epic is completely modern without celebrating any hero. It represents a
struggle to find a common ground between the secular and sacred in the world we inhabit.’
(An outstanding modern epic)

‘The Muslim philosophers gave new insights in all branches like philosophy, astronomy,
medicine, and many other disciplines, and ultimately passed their discoveries along to
Europe.’ (Al Ghazali and the golden age of Islam)

‘Madhubala, not only possessed attractive physical appearance, but also was equally graceful and beautiful in her social behaviour and mannerisms.’ (The Venus of Indian cinema)

‘History shows that scientific and theological perspectives often coexist peacefully. Christians have historically integrated well with scientific ideas, as Hinduism in the flourishing of logic and mathematics and the scientific advances made by Muslim scholars during the Ottoman Empire.’

(The path of science and religion) ‘Economists generally attribute much of China’s growth to two main factors: large-scale capital investment (financed by large domestic savings and foreign investment) and rapid productivity growth.’ (China’s phenomenal economic progress) ‘One major reason for our failure to enforce an effective Local Government system is that this system has been anathema to the political and bureaucratic elites (sic) in Pakistan. Added to that is the corrupt mafia at the third tier of the government.’  (Why local government is dysfunctional in Pakistan)

Dr. Tariq Rahman praises the book for the ‘breadth of the author’s interests, his engaging
style and his courage to express his opinion candidly but with disarming urbanity and
courtesy’. Prof. Dr. Akbar S. Ahmad pronounces that ‘Zafar Aziz Chaudhry represents the best traditions of the civil servants of the Punjab who are both distinguished administrators and scholars.’ Ex-Ambassador Javed Hafiz appreciates the flow of Zafar Aziz Chaudhry’s words and expressions in English language.

To sum up, the distinctive feature of ZAC’s writing is his firm grasp of an issue, its multi-
angular elucidation, and his crisp, dispassionate and yet authoritative judgment on all issues.