Israeli strikes on Palestinians and the International response

The Israeli justifications are wearing thin 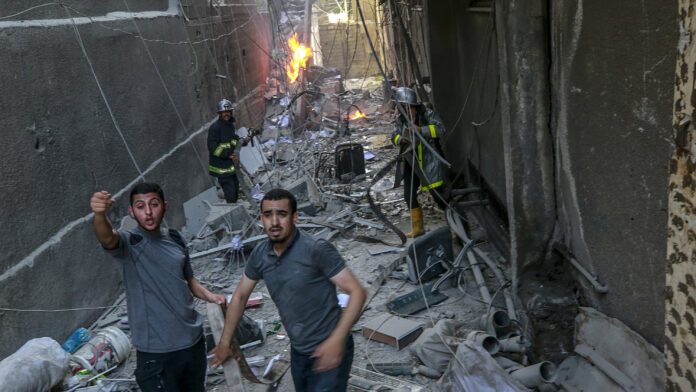 In the third week of August, Israeli forces raided and forcibly closed the offices of six Palestinian non-governmental organizations (NGOs), including three leading human rights organizations in the occupied West Bank. Tensions often arise between Israel and the Palestinians living in East Jerusalem, Gaza and the West Bank.

Gaza is ruled by the Palestinian militant group Hamas, which has fought Israel on several occasions. Israel and Egypt tightly control Gaza’s borders to prevent the flow of arms to Hamas. Palestinians in Gaza and the West Bank say they are suffering from Israeli actions and sanctions. Israel says it is only acting to protect itself from Palestinian violence. The threat of evictions from some Palestinian families in East Jerusalem has also fueled anger.

The move follows Israeli Defense Minister Benjamin Gantz’s decision to designate six civil society groups as “terrorist” organizations in October last year. These groups include the oldest and the most prominent human rights NGO in Palestine and one of the oldest in the Arab world, along with the Adamir Prisoner Support and Human Rights Association, Defense for Children-International, the Union of Agricultural Work Committees as well as Center for Research and Development, and the Union of Palestinian Women’s Committees was included.

All six organizations, several of which have been at the forefront of advancing ongoing cases against Israel at the International Criminal Court, are respected and have strong ties to foreign NGOs and governments. These groups receive foreign financial support, including from many European governments. This move has also been seen as an attempt to shut down organizations by cutting off their funding. The moves were seen with shock and outrage by Palestinians, who described the move as a brazen attempt to stifle criticism of Israeli policies.

Representatives of European governments, many of which have funded the named groups for years, expressed similar concerns and asked Israel to provide evidence of the allegations. The Biden Administration’s response to this has been largely muted, only asking that Israel should provide reasons for the raids. The permanent closure of these NGOs by such actions will have dire consequences for their problems and the constituencies they serve. Including the possibility of severe repression by both Israel and the Palestinian Authority, there will be far-reaching implications for Palestinian civil society.

In response to the international criticism, Israel promised to provide evidence, including a secret document containing evidence of the groups’ alleged terrorist ties, but has so far failed to convince a single government or donor. The European Union investigation concluded that Israel’s evidence did not meet the required standard of proof. A group of United Nations human rights experts similarly said Israel had failed to provide any public concrete and credible evidence against the groups.

Until the international community, and particularly the USA, is prepared to pressure Israel to change the course of incursion, such gestures may force Israeli authorities for some pause. In short, the situation will not be resolved soon. Any future peace agreement will require being agreed by both sides on complex issues.

In July, the EU’s nine donor countries Belgium, Denmark, France, Germany, Ireland, Italy, the Netherlands, Spain and Sweden issued a joint statement categorically rejecting the Israeli allegations and citing a lack of evidence. They announced their intention to continue funding to Six Palestinian NGOs, though reportedly the US CIA had found nothing to back up the Israeli allegations, and the Biden Administration has largely avoided commenting on the matter.

At the same time, the region has seen Iranian support increase Hezbollah’s capabilities to the point of deterring Israel and allowing the Houthis to attack Saudi Arabia and the United Arab Emirates, with significant results. Iran has a strong relation with the PIJ and its collaboration with Hamas continues. The siege has not stopped Gaza’s armed groups from bolstering their capabilities and it is expected that Iranian may continue their support despite obstacles

There are many speculations in the region that the upcoming Israeli elections played a role in recent decisions regarding attacks on both the Gaza Strip and the West Bank. Prime Minister Yair Lapid may have felt the need to show his credentials to right-wing voters due to his lack of military experience. Defence Minister Benny Gantz was also seen as eager to improve the chances to win the election.

On the Palestinian side, Hamas supported the PIJ rhetorically but not militarily. It also helped Egypt broker a ceasefire. However, this military confrontation allowed the PIJ to demonstrate its military capabilities on its own. There will no doubt be tension between Hamas and the PIJ, which has lost two key leaders and expects more support from Hamas.

Egypt also has actively sought to reach a ceasefire in all of the above wars and military disputes. This time it tried to de-escalate the situation between Israel and the PIJ in order to stop the attack and continue its efforts once it had started until a ceasefire was reached, in which Qatar was instrumental. Egypt indicated in the ceasefire agreement that it would seek to comply with the PIJ’s request that two prisoners held by Israel be released.  However, Defence Miniser Gantz has indicated that Israel will not release them.

The military crackdown on NGOs has drawn even more outcry from the international community. The United Nations Human Rights Office has described this move by Israel as completely illogical. In a public show of solidarity on the day of the raids, representatives of EU diplomatic missions including Germany, Poland, the UK and others met with representatives of the six targeted groups, even forcing the USA to break its silence. They were forced to publicize that it was “concerned” about Israel’s closure of organizations and for the first time expressed that the evidence provided by Israel did not support any justification that civil society take action against organizations.

Until the international community, and particularly the USA, is prepared to pressure Israel to change the course of incursion, such gestures may force Israeli authorities for some pause. In short, the situation will not be resolved soon. Any future peace agreement will require being agreed by both sides on complex issues.

The May 2021 violence was the fourth major war between Hamas and Israel since 2008, said Jeremy Bowen, the BBC’s Middle East editor. He has seen previous wars end this way, that both the sides claimed victory and then basically sowed the seeds of the next battle. At this time if the status quo does not change positively, it will have another round.