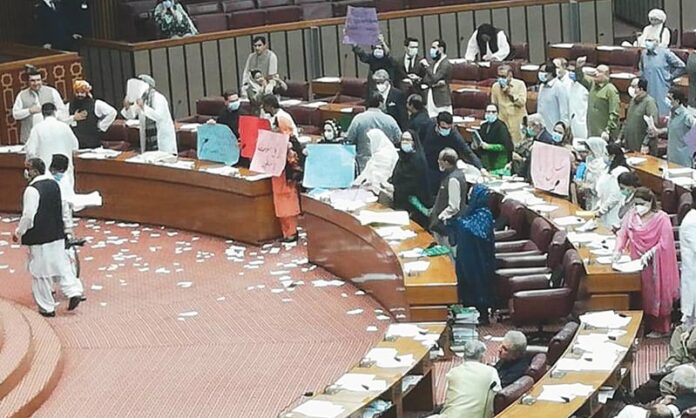 Nations typically come together when tragedies occur, but Pakistan is an exception nowadays. The country’s worst floods should have compelled the political adversaries to put aside their partisan differences and give a coordinated response to the disaster. But this is an expectation that can never be fulfilled. Except for a few days after the fatal downpour started to cause unheard-of devastation across the country, dirty politics continued business as usual. ‎

The letter KP Finance Minister Taimur Jhagra sent to the federal government stating that the PTI-run provincial government could not generate a budget surplus was the most blatant example. The letter’s sole purpose was to damage the economic rescue plan because it was sent and made public just days before the IMF board was scheduled to meet and finalize our bailout package. ‎

Every provincial government was obliged to produce a budget surplus as per the conditions of the IMF agreement, which they had all agreed to do in writing. The leaked phone conversation in which Jhagra and the previous federal finance minister admitted the situation would be bad for the state but decided to send the letter, was equally dramatic. Fortunately, the Fund’s plan did not fall apart. Pakistan received the first tranche necessary to reduce the risk of default after the board clearance on August 29.

A coordinated response is necessary to address the humanitarian crisis the country is currently experiencing in the face of a formidable economic challenge and skyrocketing inflation. In order to handle an enormous calamity, political leaders must band together. But this is not taking place. ‎

Meanwhile, the extensive flooding brought on by the abnormal monsoon rains has caused massive displacement and loss. Climate change, which has been implicated in 80 percent of the nation’s natural disasters over the previous 20 years, is mostly to blame for this catastrophe. However, it has been made worse by poorly planned or unlawful river and canal bank constructions. ‎

The disaster has raised several crucial questions, one of which is whether the country’s political elite can still show the cooperation and resolve required in the coming months to guide the ship of state through these choppy waters and to safer shores. ‎If these stakeholders do not get serious, the scenario ahead can worsen.

Compared to 2010, when the country was last engulfed in massive floods, the situation is much worse. Over 30 million people have already been affected, and flooding has covered enormous swaths of territory, covering nearly a third of the country. The tragedy impacted over 100 districts, with 80 districts designated calamity-stricken. Crops have suffered significant damage in addition to extensive residential and infrastructure demolition. ‎

Over 1000 people have already died, including many children. A lot of livelihoods have been lost. Fifteen thousand schools have been destroyed by flooding: persistent flooding, bad weather, transportation disruptions, and infrastructure damage impeded relief and rescue efforts. Heartbreaking pictures show people struggling to survive in a sea of agony. Five hundred thousand people are living in camps. The estimate for the economic costs of the disaster is $10 billion so far.

This tragic state of circumstances did little to persuade certain political figures to end their combative tactics and polarizing language, at least temporarily. For instance, despite the mayhem around the nation, the PTI held its public gathering in Jhelum. ‎

Imran Khan continued to use a combative tone in his speech while pledging that his party would stop at nothing to help and rehabilitate flood victims. In response to criticism, he declared that he would keep holding rallies despite floods, heat waves, and “even war.” He protested in other cities, and his demeanour became even more antagonistic. In response to the federal government’s appeal, a PTI leader requested at one rally, asking Pakistanis living abroad not to give money to the federal government for flood relief.

Prime Minister Shahbaz Sharif extended an olive branch to Imran Khan and offered to work with the opposition during a national emergency as the coalition government launched its relief efforts. However, the PTI-run provincial governments in Punjab and KP did not make many efforts to engage with the centre. ‎

Instead, the chief minister of KP falsely claimed that the federal government had failed to assist and that his provincial and the federal governments had not spoken since the floods. The chief minister of Punjab requested help from Imran Khan rather than Islamabad. Chief Minister Pervaiz Elahi appeared busy with a disagreement with the IG police about the appointment of district police officials. ‎

Prime Minister Sharif and the heads of the services gathered at a high-level conference last week to assess the situation and develop comprehensive relief and recovery strategies.The PTI chief ministers of Punjab and KP, who were invited along with other CMs, both boycotted it. The chief secretaries of these two provinces were there, but Khan ordered their political overlords to abstain.

Some PML(N) politicians criticized this behaviour and reaffirmed their political criticism of PTI on other fronts. Tensions increased as certain members of the coalition government continued to lambast the PTI. As his telethon attracted record donations from Pakistanis living abroad, Khan clarified that the money he was gathering would be exclusively allocated to Punjab and KP. Amid a national emergency, the political leaders’ divided response was an uninspiring display. ‎

The admirable response from the general public and local communities was the ray of sunshine in this desolate terrain. ‎

The traits of someone with a lengthy history of charity include generous support. NGOs and private charities all rose to the occasion and mobilized volunteers in locations they had access to. Media coverage emphasized the areas that required immediate assistance. To help the flood victims, campaigns were organized by civil society, businesses, the media, and residents across the country. Local residents who risked their lives to save others were outstanding examples of bravery and heroism. In addition, other municipal officials, both men and women, made round-the-clock assistance and evacuation efforts. The suffering people’s ability to endure also stood out as evidence of the dignity and resiliency of the populace. ‎

A show of unity among political figures and parties should be made to match the public’s role as an example. However, there is still a shortage of this because politicians are busy with their disputes

The disaster has raised several crucial questions, one of which is whether the country’s political elite can still show the cooperation and resolve required in the coming months to guide the ship of state through these choppy waters and to safer shores. ‎If these stakeholders do not get serious, the scenario ahead can worsen.

Abu Hurrairah
The writer may be reached at [email protected]