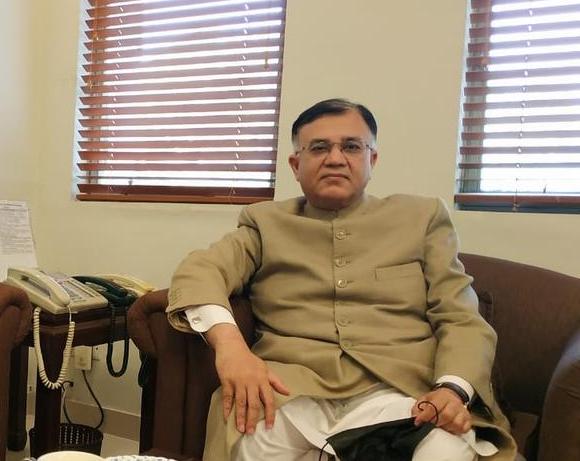 ISLAMABAD: Punjab Province is all set to get a new Chief Secretary (CS) as the incumbent CS Kamran Ali Afzal Saturday wrote a letter to the federal government, conveying his inability to continue his current assignment “owing to personal reasons” and requesting that his services be withdrawn with immediate effect.

The letter by Kamran Ali Afzal, a copy of which is available with Pakistan Today, has been  addressed to Federal Secretary, Establishment, Mr Inamullah Khan. 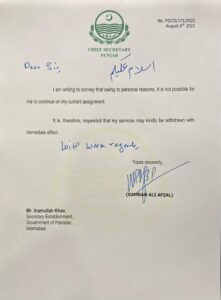 Kamran Ali Afzal, along with the then Inspector General of Police (IGP) Rao Sardar Ali Khan, had came under severe criticism for massive arrests and severely torturing PTI workers and rights activists during the PTII long march on May 25.

Pakistan Tehreek-i-Insaf (PTI) however has distanced itself from the CS request for transfer to the center though the party had welcomed transfer of IGP Rao.

Afzal’s appointment was approved in September 2021 when PTI’s Usman Buzdar was in charge. He was the fifth Punjab chief secretary during the three years of the previous PTI-led government and belonged to the 21st Common of the District Management Group.

Punjab Chief Minister Parvez Elahi had expressed his annoyance at Afzal and former police chief Rao Sardar Ali Khan over their action against PTI legislators and deploying the police force on the floor of the Punjab Assembly earlier this year.

PTI Chairman Imran Khan, in his public meetings, had also lambasted the chief secretary, former police chief, as well as commissioners and deputy commissioners — particularly those posted in Lahore and Layyah in the wake of the PTI’s long march on Islamabad on May 25.

PTI leaders had warned the officers that his party would initiate legal and departmental actions against them after coming to power again.

On some occasions, Imran had named both the top Punjab government officers in his public meetings and announced making them an example, accusing them of taking the side of the ruling PML-N.

Omar Sarfraz Cheema, adviser to Punjab chief minister on information, was questioned about the matter during a press conference in Lahore and said it had nothing to do with the PTI.

“What his role has been in the last 2.5-3 months is before you and maybe he did not feel [right] about moving forward together because he has his own priorities and service career [to think about],” Cheema said.

According to some media reports, Rao Sardar Ali Khan and Afzal had requested the government to transfer them out of Punjab, fearing punitive action after the change of government in the province in the wake of the chief minister’s re-election.