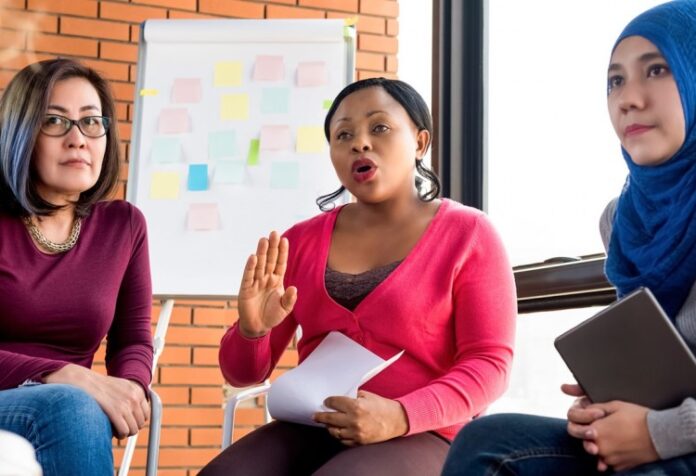 It is often asked whether such a thing as Islamic feminism exists or not. The term sounds oxymoronic. Many religious scholars believe that feminism is un-Islamic and is surely not a part of Islam. But what is feminism to begin with? How do Muslim feminists relate it to Islam? The answer is simple yet complex. Islam was the very first religion that methodically empowered women when they were being victimized by men. Before that, the disease of male chauvinism was prevailing in Arab societies. At that time women living a dignified life with equal rights was an alien concept. But Islam came to rescue and introduced parity. So what is feminism if not that? It is nothing but an act to treat women with dignity and consider them human beings who possess equal rights and respect.

On the other hand, we see women in the Western world were unable to enjoy autonomous status up until the 1930s. Islam gave its women these basic rights way before these waves of feminism.

Although Islam empowered women in every way, Muslims were not ready to accept this notion of gender equality. The reason is the patriarchal structure. The power dynamics of a patriarch always gets challenged when speaking about such parity.

As a result, many hadiths were reformulated to curtail the status of women so that they remain subordinate and obey men without reasoning.

For such contradictions, Muslim feminists like Fatema Mernissi demanded a re-interpretation of the Q!uranic text and hadith. For them, a feminist interpretation of the Quran and Hadith would help us break down these shackles of oppression. In her book Beyond the Veil: Male-Female Dynamics in Modern Muslim Society, Mernissi describes how we have lost our historical Muslim she-roes in the process of male interpretation of Islam. In her other work The Veil and the Male Elite: A Feminist Interpretation of Women’s Rights in Islam, she brave-heartedly condemns the male Muslim elite who created the institution of seclusion and veil to destabilize women’s influence on the Muslim world. Today, women of the Muslim world are still struggling with these male elites. They make decisions about a women’s body, her sexuality, and her whole existence based on their interpretations.

If Pakistan starts empowering its women according to the teachings of Islam then many of the issues regarding the mistreatment of women would automatically dissolve. But is the state equipped for gender equality or is it also a part of this constant iteration of maltreatment of women?

The influence of the Quran on our law must be stronger than the influence of patriarchy. Sadly, it is the other way around. The celebrated claim is feminism cannot go along with Islam because the former is man-made and the latter is divine. If this is the case then it must apply to patriarchy as well. The reason being patriarchy is as man-made as it gets.  Patriarchy and Islam are poles apart, more than feminism and Islam could ever be. It is time we learn about our religion in a way that is not intoxicated by the men in power. Due to poverty and lack of resources, most of the women in the Muslim world are not even aware of their Quranic rights, including in Pakistan.

The notion that Islamic feminism is a contradiction in terms is a product of the white feminist mindset. The “saviour complex” of the West and the colonial mindset reflects perfectly here. The need to safeguard the Muslim woman must come from outside because she is unable to do it on her own. This is the narrative that we must break down. With the new wave of feminism, intersectional feminists are advocating feminism for all. Empowering every woman no matter from which background, ethnicity, class, and socioeconomic background she comes is the essence of the new wave of feminism. We all see a glimpse of this at the Aurat Azadi march, every year.

So is it a viable approach to compare Islamic feminism with Western feminism? The answer is clear. The West’s women’s movement which later turned into feminism was successfully hijacked by the sexual revolution in the 1960s. Women’s liberation was confused with sexual liberation and hence women became the target of exploitation, whereas Islamic feminism follows a particular norm and teachings. There is indeed an underlying difference in the pattern of both schools. But if we just choose to see the meaning of feminism rather than its historical contrast; then there is no metamorphosis. Both strive to achieve gender equity within the framework of their societies.

The enemy is common; misogyny and male privilege. The notion of “solidarity” and victimhood brings them under one umbrella. If Pakistan starts empowering its women according to the teachings of Islam then many of the issues regarding the mistreatment of women would automatically dissolve. But is the state equipped for gender equality or is it also a part of this constant iteration of maltreatment of women? This is the question we need to ask.

Romaza Amjad
The writer is a freelance columnist