Ahsan Iqbal faces tough questions from overseas Pakistanis in US 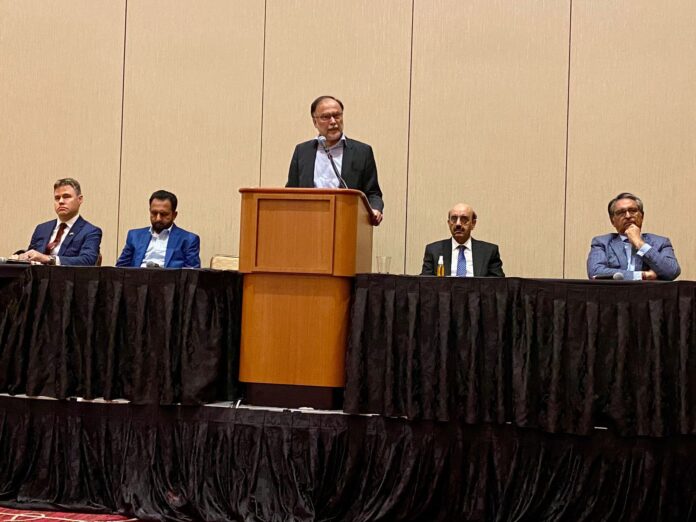 ISLAMABAD: Minister for Planning and Development Ahsan Iqbal faced difficult questions from Pakistani Americans during a question-and-answer session at the Association of Physicians of Pakistani Descent of North America (APPNA) conference.

During the question hour, the minister was struck with hard-hitting questions from overseas Pakistanis, including an individual calling him the “propaganda minister” and claiming that he was “talking to the wrong audience”.

The man maintained that parties such as Iqbal’s – the Pakistan Muslim League-Nawaz (PML-N) – intentionally perpetuate illiteracy in rural areas of Pakistan to benefit their party and that the conference he was addressing to was of “literate” people.

This elicited discontentment from the dais and the man was urged to ask his question.

The man finally asked: “If you do not give us the right to vote, what right do you have to address us?” He was alluding to the coalition government’s decision to amend the electoral reforms bill and successfully striking off overseas Pakistanis’ right to vote.

A second individual alleged that everyone knew who “the boss” was in the country and that it was the current coalition government that called the former PTI government “selected”, then “how did you [Iqbal] become part of this “selected” lot.”

Following the conference, Ahsan Iqbal, however, took to Twitter claiming that he “had a lively question & answer session in a very democratic & professional manner.”

The minister added that he offered APPNA full assistance to set up a modern teaching hospital and medical college in Pakistan.

Later, Iqbal said that the family came to his hometown of Narowal and apologised for their actions.

“[The family] expressed remorse and embarrassment. I had already announced that I will not take legal action against them. We all are Pakistanis and we don’t have to turn the right to disagree into hate and maintain mutual respect,” he wrote on his official Twitter handle while sharing a picture of the meeting with the family.