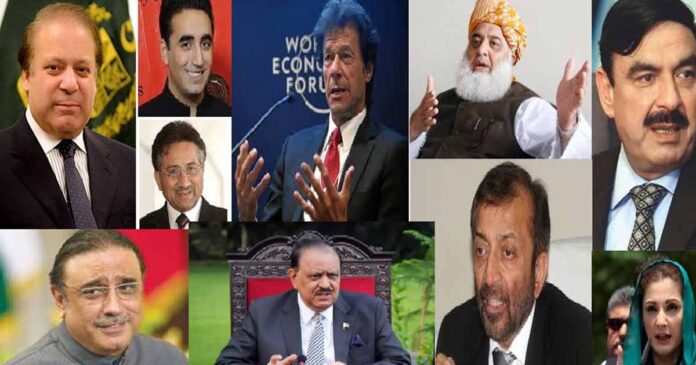 With the removal of the elected government of Imran Khan on April 9, Pakistan is at the crossroads again. On 5 July 1977 General Zia-ul-Haq took control of the country on the promise of holding elections within the stipulated period of 90 days. He extended his misrule for over 11 years (July 1977 to August 1988) on the excuse of ‘Positive Results’ which meant government of choice.

In order to counter the political appeal of Bhutto’s PPP he discovered Mian Muhammad Sharif of Gawalmandi to help him. On his recommendation his eldest son Mian Muhammad Nawaz Sharif was inducted into the provincial cabinet as Finance Minister. Unlike his younger brother Shehbaz Sharif, NS was fond of extra-curricular activities like wrestling, playing cricket in Bagh-e-Jinnah and acting under the tutelage of the famous comedian of his times, Rangila.  Once in, there was no looking back, NS managed to become Punjab Chief Minister to counter Benazir Bhutto who had been elected Prime Minster in the 1988 electoral contest.

With the help of the establishment, he then got himself elevated as PM after the dismissal of the Benazir government in 1990. In search of absolute power, once in control of the federal and the provincial governments, he decided to go after his mentor President Ghulam Ishaq Khan. Empowered by the draconian Zia Amendment to the constitution, Article 58 (2b), GIK dismissed his government. He then flexed his influence within the Judiciary which restored his regime.

Now it was one on one with GIK the face versus the embryo of the establishment. In order to save the federation, then COAS Gen Waheed Kakar intervened and under a compromise both were sent packing.

Since then there has been no looking back. NS has survived and remains untouchable, has proven himself to be the biggest debacle of the establishment. With the deep influence of his party in the bureaucracy and the judiciary in Punjab together with his financial empire he remains out of reach of the state apparatus and the laws of the land.

Without major structural changes in the establishment, good governance and reforms will remain a pipe dream and impose corrupt- to-the-core leadership to rule over us. Over 220 million people of Pakistan are not for sale, neither can its land be used for the evil designs of others. Real results will be achieved only when everyone decides to stand up and be counted; the thrust of numbers can overcome the fear of the bullet.

In search of ‘Positive Results’ the nation has been detracked not once but several times. Despite gaining freedom in 1947 the ‘Colonial Establishment’ (armed forces, judiciary, bureaucracy) remains in its original form till today. Pakistan was envisioned as a Constitutional republic, yet the effort to produce a consensual document took about nine years (1947 to 1956) and a republic emerged with Iskander Mirza the first President and the last Governor General. Elections under the constitution were planned for 1958.

Fearing strutural changes President Mirza and the then Army Chief Ayub Khan conspired to derail the entire process for the purposes of producing ‘Positive Results’ as envisioned by them. Both Mirza and Khan were graduates of the prestigious Military Academy at Sandhurst; Mirza then opted to join the civil service and held important positions in the bureaucracy.

Finally the transition to democracy was hijacked by Khan who clamped martial law in October 1958 and abrogated the constitution which was the beginning of the end for the Quaid’s Pakistan and the dream of freedom for which many lives were lost.

The superior judiciary under Chief Justice Muhammad Munir provided cover to the usurper. Khan then decided to create his own subservient political leadership by sending the founding fathers home under his EBDO Ordinance (Elected Bodies Disqualification Ordinance). Hussain Shaheed Suharwardy, the brilliant lawyer and the undisputed leader of the Eastern Wing, challenged his disqualification in the tribunal and was exonerated. After consolidating his evil empire, Khan decided to seek legitimacy through elections in early 1965. Mohtarma Fatima Jinnah was fielded against the dictator. She demanded restoration of the 1956 constitution and a return to parliamentary democracy. It proved to be the last-ditch effort to save the federation by neutralizing the ‘Positive Results’ mantra of the dictator. She did not win but seriously dented the power of the dictator

Bhutto as a popular leader was able to overcome some of the ‘Positive Results’ of the Khan era. In the first free and fair elections of 1970 several ‘Establishment Politicians’ like the Chaudhrys of Gujrat and Pirs of Sindh had to bite the dust. Bhutto succeeded in formulating another consensual constitution in 1973 and the Islamic Republic of Pakistan emerged.

The democratic era proved to be short lived and the ‘Boots’ were back for another round of ‘Positive Results’. The Benazir- Nawaz tussle weakened the democratic order which led to an institutional collapse. Then came the ‘Charter of Democracy’ (COD) which was meant to contain the establishment grip over power but it led to widespread misappropriation of wealth and turned into ‘Charter of Corruption’.

As the fourth usurper, Pervez Musharraf tried the same approach. In search of ‘Positive Results’ he created his own brand of politicians which included the Khans of Lahore, Tareens of Multan, Mehars and Jatois of Sindh among others, while the Chaudhrys of Gujrat continued. In order to end military interventions, NS decided to try General Musharraf for high treason under Article 6 of the Constitution. It was indeed a bold move on part of a political leader who himself was a product of the establishment under the doctrine of ‘Positive Results’.

Despite being a constitutional democracy, no one seems to take the constitution seriously. In the end the colonial establishment survives and the ‘Positive Results’ approach prevails. Every country has an establishment that is designed to serve, not rule as has been the case in the land of the pure. There have been short but weak attempts at reforming the state institutions.

The founding fathers tried (1947 to 1958) and then the Bhutto regime (1971 to 1977) after which it has been downhill. In the interim 1972 constitution Clause 216 was enacted for the formation of administrative accountability to provide relief to the public against rampant executive abuse.

A toned down version was then included, Clause 212 in the permanent version which was removed in 1979 by the third usurper. In other words no relief to the public, only ‘Positive Results’. It seems no lessons have been learnt.

Democracy has its own dynamics as it was born in the noise of the Bazaars of Athens around 520 BC. It produces its own results which can neither be predicted, controlled nor manipulated. Credible, free and fair election is the way forward for reforms to take place. Only ‘ Awaz-e-Khalq’ (Voice of the masses) has to be heard to move forward; every other approach is misleading and farcical.

The current experiment to produce ‘ Positive Results ‘ has been disastrous and deserves to be discontinued to contain the damage caused by this unwanted adventurism. The role of every institution has been defined in the constitution which must be followed in letter and spirit.

Without major structural changes in the establishment, good governance and reforms will remain a pipe dream and impose corrupt- to-the-core leadership to rule over us. Over 220 million people of Pakistan are not for sale, neither can its land be used for the evil designs of others. Real results will be achieved only when everyone decides to stand up and be counted; the thrust of numbers can overcome the fear of the bullet.