Even being born in the USA doesn’t help 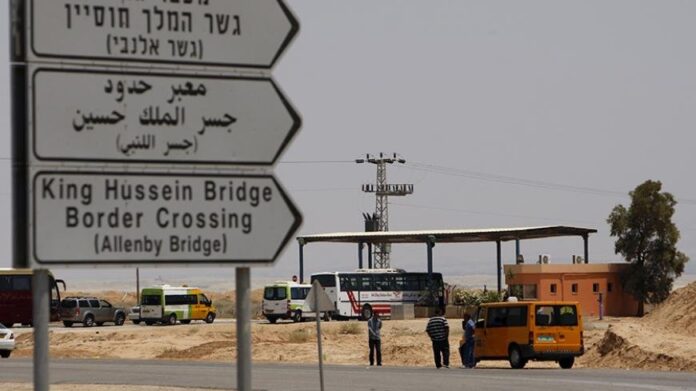 Maya Berry, the executive director of the Arab American Institute, was in the Middle East earlier this month with her children. She had taken them to her ancestral home in Lebanon while in the region for work-related meetings. Since she had a free day in Jordan, Maya planned a 24-hour visit to the West Bank and Jerusalem where she hoped to pray at al Aqsa, go to the Ibrahim Mosque in Hebron, and then spend the night in Bethlehem. What should have been a quick and rewarding trip turned into a nightmare —one that is tragically all too common for Arab Americans visiting the Holy Land.

Maya and her two college-aged children spent hours being rudely interrogated by Israeli border control officials at the Allenby Bridge crossing from Jordan to the West Bank. They were asked invasive questions about their Lebanese ancestry, with one of the Israeli officials even correcting Maya’s pronunciation of her own name —all while being scolded for responding in English to the guard who insisted on speaking to her in Arabic.  She was separated from one of her children who was questioned about his middle name, his ethnicity, his faith. The Israeli official looked through his phone at his photos.

They finally gained entry and were able to proceed to Jerusalem where Maya and her children would fulfill their dream of praying at Al-Aqsa. They then set out for Hebron where the nightmare continued. There they spent another three hours dealing with the same indignities at a checkpoint near the Ibrahim Mosque. In all, one-third of their entire visit was spent being subjected to humiliating treatment at the hands of Israelis.

In Hebron, right near the mosque where an extremist Jewish settler massacred 29 Palestinians and wounded more than a hundred who were praying during Ramadan in 1994, they were accosted by both gun-toting settlers and foreign Jewish pilgrims who threatened and harassed them —while ubiquitous armed Israeli patrols did little to protect them. The experience was traumatizing and angering.

From the treatment Maya Berry and her children received a few weeks back —and the degrading treatment other Arab Americans will surely be subjected to during the summer travel season —it doesn’t seem that Israel is ready to take that step and Biden should make it clear that its refusal to do so will preclude them from the program. It is the least that could be done to afford our community basic equal protection from Israel’s well-established human rights violations.

I’ve been there and have been forced to deal with the same wretched treatment. When I was running a project launched by Vice President Gore in the 1990s, entry and exit was always a frightening, hold-your-breath experience. On one visit, in which I was to accompany Mr Gore to a dinner at the Knesset, I was delayed for over five hours at the airport by border officials. They interrogated me over and over again about my parents, my origins, and my purpose in being in the country. I was only released after I was able to place a call to the US Embassy. I was then allowed to join the vice president at the dinner. While recounting the events, I told him that while I was there to help advance the peace process, the anger I felt after enduring this treatment made that work personally more difficult.

Over the years Maya and I have fielded hundreds of similar complaints from Arab Americans, especially Palestinian Americans, who’ve provided us affidavits of their treatment on trying to enter Israel/Palestine. They were harassed and interrogated for hours. Some were detained for a day, denied entry, and deported. Palestinian Americans, even those born in the USA, were told that Israel didn’t recognize them as Americans. They were Palestinians and therefore had to leave the country, secure a Palestinian ID and enter through Jordan. On their behalf, we’ve complained to the State Department demanding that our government insist that our rights as American citizens be protected.

Past Secretaries of State (most notably Madeleine Albright and Condoleezza Rice) have forcefully raised this issue with the Israelis, but to no avail. The best we were able to get was a State Department “Travel Advisory” warning that American citizens of Arab descent, especially those of Palestinian descent, can expect to be treated differently than other US visitors. This acknowledgment of a problem, without doing anything to correct it, only adds insult to injury.

The first page of the US Passport says that the Secretary of State “hereby requests all whom it may concern to permit the citizen/national of the United States named herein to pass without delay or hindrance and in case of need to give all lawful aid and protection.” And in the 1951 US-Israel Treaty on “Friendship, Commerce, and Navigation” both parties agree to guarantee to the rights of each other’s citizens when visiting their countries, including the rights to “travel therein freely; and to reside at places of their choice, enjoy liberty of conscience…free from unlawful molestations of every kind, the most constant protection and security.” From our 40 years of work dealing with the discriminatory treatment of Arab Americans traveling to Israel/Palestine, it’s clear that commitments found on our passports in the treaty are honoured more in the breach than their observance.”

This issue is once again front and center, for two reasons: Israel’s request that they be admitted to the US Visa Waiver Program (VWP) and President Joseph Biden’s upcoming trip to Israel. Because admittance into the VWP requires reciprocity —that is, each party agrees to fully respect, without discrimination, the rights of each other’s citizens —and because Israel has never demonstrated that it is ready to fulfill this requirement, we’ve had several meetings with administration officials in recent months urging them to reject Israel’s request.

From the treatment Maya Berry and her children received a few weeks back —and the degrading treatment other Arab Americans will surely be subjected to during the summer travel season —it doesn’t seem that Israel is ready to take that step and Biden should make it clear that its refusal to do so will preclude them from the program. It is the least that could be done to afford our community basic equal protection from Israel’s well-established human rights violations.

Facebook
Twitter
Linkedin
WhatsApp
Email
Previous articleAfghanistan: Still on the edge of collapse and facing terrorism
Next articleMiftah would leave if Dar returns as Finance Minister