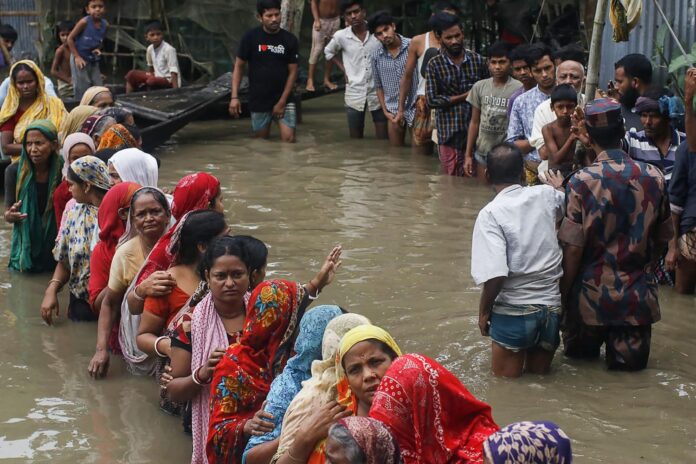 It is gratifying to note that Bangladesh and India both resolved to work more closely together for further collaboration in the areas of common rivers and water resources management, among other things, during the seventh session of the Joint Consultative Commission meeting held in Delhi on June 14.

Since the start of the covid-19 epidemic, there had only been one virtual JCC meeting; this was the first one to take place in person.

However, according to media reports, a number of government officials and climatologists agree that India and Bangladesh cooperation in flood water management and forecast should be strengthened to reduce damages caused by common natural calamities occurring in the two countries. This is due to the fact that the flood situation across India-Bangladesh’s northeastern part is getting worse. As Assam, Tripura, and Meghalaya are only a few of the Indian states that border Bangladesh, their infrastructure development projects and weather patterns have a significant negative impact on Bangladesh’s ecosystem and topography.

The first is the depositing of sediments from upper streams (Indian states Assam, Tripura, and Meghalaya) in lower stream harbours, lakes, and rivers, which is a major factor in the development of such massive floods.

There are 54 rivers going through both India and Bangladesh with a direct impact on  both populations. In recent years, harsh weather has become more frequent in Bangladesh and India, resulting in significant damage. Environmentalists have cautioned that climate change may increase the frequency and severity of disasters, particularly in Bangladesh’s low-lying and highly populated areas.

As crucial as collaborative cooperation is for the two countries’ effective flood water management, it is also necessary for Indian counterparts to assess Bangladesh’s shared rivers.

There are numerous water management difficulties caused by floods, droughts, and water distribution in the Ganges, Brahmaputra, and Meghna (GBM) river basin, which India, Bangladesh, Bhutan, China, and Nepal all share. There should be a common understanding of the problems, whether it be erosion or flooding. To develop solutions, scientists from both countries—and perhaps China as well, given that the Ganga and the Brahmaputra are connected—should collaborate. However, deadly flood reminds us the urgency of India-Bangladesh-Nepal-Bhutan-China flood management cooperation

It is a sad fact that India has been indiscriminately draining water from trans-boundary rivers during dry seasons over the years, leaving several Bangladeshi rivers nearly dead and unable to handle monsoon floods

Numerous local experts and media reports claim that many of Bangladesh’s rivers have essentially become streams and constrained waterways, making them utterly incapable of draining out a sudden surge of incoming water when India opens its floodgates to release excessive water deposits during the monsoon.

While we do not advocate that Bangladesh’s Indian neighbours suffer from heavy rains and flooding, the fact that Bangladesh is located downstream means that millions of Bangladeshis do suffer when water is released suddenly.

For instance, the Teesta River suddenly rose in volume after India opened all 54 floodgates at the Gajoldoba barrage just 12 days prior, engulfing 63 villages in five northern districts in Bangladesh and isolating roughly 100,000 people.

This particular water discharge, which involves opening all floodgates simultaneously, calls for caution and also humanitarian compassion. Furthermore, the Teesta barrage inside Bangladesh was put at risk by the abrupt release of water from upstream, forcing Bangladesh’s barrage authorities to activate all 44 floodgates at the barrage.

In order to regulate floodgates during monsoon and floods, both nations must work together to develop a damage control and early warning system. Making one’s life simpler shouldn’t come at the expense of others.

To reduce the harm brought on by the tragedies common to both nations, India and Bangladesh should work together more closely in managing and forecasting floods.

This is relevant because of the present disasters affecting Bangladesh’s Eastern and Northern regions, where people are coping with their suffering and losses. Indian residents who live downstream adjacent Bangladeshi territory across the border are also having similar issues.

Environmentalists fear that climate change could cause additional disasters, especially in Bangladesh, which is heavily populated. The South Asian neighbours have recently witnessed more extreme weather, resulting in significant damage.

India has offered Bangladesh help in managing floods as both nations’ northeastern regions are being devastated by floods. We also experienced flooding in the northeast. “We’re now sharing long-term flood control data,” the Indian External Affairs Minister said, noting that the two neighbours shared 54 rivers. It is a piece of good news for Bangladesh and India both. Joint cooperation in this regard is required for serving common interest.

The Ganges, Brahmaputra, and Meghna (GBM) river basin, which India and Bangladesh share with Bhutan, China, and Nepal, is home to a number of water management issues brought on by floods, droughts, and water distribution. Whether it be erosion or flooding, there should be a shared knowledge of the issues. Scientists from both nations, as well as perhaps China as it is also a part of the Ganga-Brahmaputra sstem, should work together to find answers to the issues. Thus. China must cooperate with India, Bangladesh, Bhutan and Nepal also. China can’t remain silent on this issue.

With India and Bangladesh bearing the brunt of floods every year as a result of their location in the world’s second-largest river basin, experts in both countries are emphasizing the importance of taking an “integrated approach” and “regional co-operation” to reduce the enormous economic and human costs.

There are numerous water management difficulties caused by floods, droughts, and water distribution in the Ganges, Brahmaputra, and Meghna (GBM) river basin, which India, Bangladesh, Bhutan, China, and Nepal all share. There should be a common understanding of the problems, whether it be erosion or flooding. To develop solutions, scientists from both countries—and perhaps China as well, given that the Ganga and the Brahmaputra are connected—should collaborate. However, deadly flood reminds us the urgency of India-Bangladesh-Nepal-Bhutan-China flood management cooperation.