Bilawal terms Imran’s narrative on corruption ‘a pack of lies’ 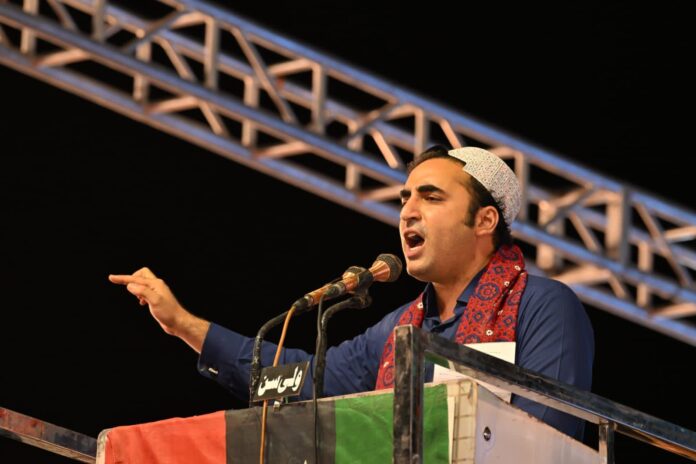 Bilawal made these remarks while addressing a public gathering in Larkana on the occasion of the 69th birth anniversary of the slain PPP chairperson and former prime minister. Bilawal said that Benazir Bhutto bravely fought military dictators and her activists have kept her message alive in today’s Pakistan.

He also blamed Khan for being ‘power-hungry criminal’ who, he said, was responsible for the current inflation and is now accusing others of causing the issues.

“It was because of the struggle of PPP jiyalas that Imran Khan was ousted from power via a no-trust move,” he told the participants gathered at the venue.

Imran Khan’s narrative against corruption is a lie, he added. The PPP chief further said his party ousted the “selected” after waging a struggle along with two other political parties.

“Imran was causing this damage to the people just to stay in power and the burden of it is now being born by the commoners.”

Bilawal asserted that the former premier must be told to respond to his performance, including the cases of corruption emerging now.

Referring to the Tosha Khana case, he said the PTI chief and the former first lady will have to provide answers about their corruption.

He said that Imran Khan has sold a watch gifted to him by a foreign country and also brought a bad name to the country.

“People now know that the slogan of change wasn’t for change, but for the destruction of the country.”

Imran Khan, he added, begged other countries for funds and is now resorting to mudslinging against his political rivals.

Likewise, he added, the government will eventually succeed in retaining the GSP+ status for the country and bring more glad tidings for exports.

“These are the things that we achieved by focusing on our work, instead of resorting to mudslinging, he said,” while taking a veiled jibe at the PTI chief.

He ensured that the government is working day and night to ensure that the country was put back on the path of stability and progress.

“It was because of the struggle by Prime Minister Shehbaz Sharif that Pakistan was saved from going bankrupt.”

The PPP leader, who is also the foreign minister, maintained that he had been visiting several countries. “Our policy is not to beg but to trade with other countries.”

“We put immense effort into taking Pakistan out of the Financial Action Task Force (FATF) grey list and it is hoped that by October, when an on-site visit is due, we will achieve this objective.”

He went on to say that Pakistan was facing two “FIRs” against it in FATF; one related to money laundering while the other related to terror financing.

Earlier, while addressing the gathering, Sindh Chief Minister Murad Ali Shah that the coming generations will keep the slogans of the party high and achieve them.

He added that the party activists will never forget Benazir Bhutto’s message and will keep it alive with zeal and zest.