Violations of the refugees rights 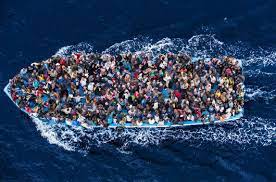 NGOs from around the world come together to celebrate World Refugee Day on June 20. These NGOs celebrate it by issuing media statements or by tweeting. Countries that signed the 1951 UN Refugee Convention also claim resettlement of refugees, but practically nothing happens. For the past five years, only voices have been raised in favour of the refugees but nothing concrete has been done.

The situation on the ground is that no country is ready to resettle refugees or work for their welfare. At present, NGOs around the world and the countries that have signed the 1951 UN Refugee Convention prefer only Afghan and Ukrainian refugees, whose resettlement in other countries is in full swing. It seems that there are only Ukrainian and Afghan refugees in this world who are stuck in a quagmire of problems. Japan, along with the USA, Canada, Europe, the UK, Australia and New Zealand, is also resettling migrants from these two countries.

However, the resettlement rate of Rohingya, Iraqi, Chinese Uyghurs, Palestinians, Syrians and Pakistanis in other countries is just 4 percent. Now the practice of resettling refugees from Muslim countries like Uyghurs, Rohingya, Iraq, Pakistan, Syria and Palestine, among others, is declining and soon it will be almost over. All the signatories to the 1951 UN Refugee Convention are non-Muslims and have so far resettled millions of Muslim refugees. But now these non-Muslim countries have apologized for giving importance to Muslim refugees for resettlement.

The files of Muslim refugee resettlement cases, which have been under process in the United States Citizenship and Immigration Services USCIS and USRAP for decades have become infested with termites. People who receive refugee status die within the status of a refugee. On social media, the question is often raised by citizens of non-Muslim countries that if non-Muslim countries, which signed the 1951 UN Refugee Convention, could shelter and resettle the Muslim refugees, then Muslim countries should also deal with this issue.

In the course of time, humanity has disappeared from the world. The wars in Ukraine and Afghanistan have made much noise in the international media, NGOs and the west. If they had made as much noise about the atrocities against the Rohingya, or in Iraq, Palestine, Syria,, or against theUyghurs, the citizens of these countries would not be refugees today. The countries responsible for increasing the refugee population around the world are the ones that forgot the refugees after signing the 1951 Refugee Convention.

Canada’s Group Five programme for refugees is also riddled with errors because no one today takes responsibility for their own sons, so how can five Canadians take responsibility for an unknown refugee? Canadian Immigration Minister Sean Fraser, US Secretary of Homeland Security Alejandro Mayorkas, and rulers of European countries and the UK keep releasing statistics on how many Ukrainians and how many Afghans have resettled in their countries.

If you look at these statements, you will feel as if only Ukrainian and Afghan refugees are oppressed in the world while the atrocities against the refugees from other countries are not visible to them. Countries signing the 1951 Refugee Convention have not promised to resettle refugees from Ukraine and Afghanistan and they have not fulfilled their human rights obligations, but they are acting like “a dove, if he closes his eyes, he thinks the cat isn’t watching him, but the cat swallows him “.

The Arab and Asian countries also spared no effort in treating the refugees harshly. If China wants to become a superpower in the world, it must adopt a human rights policy in the country. Give political asylum to refugees who are victims of atrocities. The USA has value more than China because it has a good record of human rights in comparative terms. Everyone in the world is willing to be a spy for the USA because they know that if their lives are in danger, the USA will give them nationality, money and asylum, but no one is willing to work for Chinese intelligence agencies.