Palestinians can learn from Irish successes

The importance of small steps 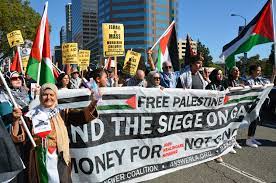 Last week, Mary Lou McDonald, the President of Sinn Fein, the Irish republican/socialist party, and leader of the opposition in the Irish Parliament, addressed a European Union conference. When asked how she would direct Irish foreign policy, her remarks were both compelling and instructive.

She began by noting: “The Irish experience of colonization, partition, and conflict… that’s where we come from.” She continued, “So Irish foreign policy has to be true to that tradition not in a passive way, in a very active way. We will be very firm on issues of self-determination, in particular on the question of Palestine. It is our firm view that we need international courage and leadership on that matter. It is clear that we have an apartheid regime. That the Israeli state actively confiscates land, actively discriminates and oppresses Palestinian citizens daily. I think Europe needs to be honest about all that and needs to exert maximum international pressure to bring that conflict to a resolution and to reach a two-state solution.”

What I’ve long appreciated about the Irish is not only how grounded they are in their history, but also how they’ve learned positive lessons from it. Sinn Fein’s victories in the Republic of Ireland and in recent elections in the North are important on multiple levels not only for what they say about the past and future of Ireland, but also for the message they can send to Palestinians about their past and future struggle with Israel.

As McDonald recognized, Ireland long suffered under colonial rule, during which the British exploited Ireland’s resources and treated its indigenous Catholic inhabitants with racist contempt. To facilitate their governance, Britain sent thousands of its citizens to colonize and rule over the island and placed the Protestant church in a position of privilege as another display of their dominance on the island.

The lesson of the Irish is that small steps guided by vision and strategy are the only way forward. Just as tiny, once colonized, and oppressed Ireland can lead the way for Europe to develop a values-based foreign policy, so too can Palestinians rise above their justified bitterness and like the Irish revolutionaries learn lessons from their oppression and project a values-based vision that becomes the beacon, lighting the way not only for a truly democratic Israel/Palestine, but also as an inspiration for struggling oppressed peoples everywhere.

The hardships endured by the Irish Catholics were many, the most notable being the infamous famines which occurred during the middle to the late 19th century. During this period, over one million Irish died of starvation or disease, while more than two million were forced to flee the country. The famines were a British-imposed crime— despite the fact that the island was producing food aplenty, the Irish were forbidden to eat their grains or livestock, or even hunt or fish on their lands. The food from Ireland was reserved for export to Britain.

The Irish often rebelled, but it wasn’t until the 1920s that they succeeded in casting off British rule and establishing the Republic of Ireland in all but the six counties of the North which were heavily populated by Protestant settlers and remained under the control of the British.

While the Republic of Ireland went about the business of building their nation, with strong support from the Irish expatriate communities abroad, strife continued in the North between the Protestant majority and the restive Catholic minority culminating in a bloody civil war. This conflict in the North ended with’ an agreement that provided a power sharing arrangement, open borders between the north and south, and a provision that should majorities in the Republic and the North agree, in the future, a referendum would be held on Irish unity.

It was fascinating to observe how in the wake of the agreement the population of the Republic were able to put aside bitterness and focus on building a future of prosperity. During the first two decades following the agreement, the island, for all intents and purposes, became an economic unit. People travelled freely, trade and investment went both ways and bonds were built. Ideological and political hostilities remained with the Protestant Unionists (those wishing to remain a part of the UK) squaring off against the Irish Republicans (those seeing unity with the Republic of Ireland).

Then came Boris Johnson and Brexit, keeping the border open but imposing awkward restrictions on commerce that pleased no one. This set the stage for the Sinn Fein victories in the North and the Republic.

While no one believes that the path forward will be easy— Protestants in the North will attempt to block Sinn Fein’s efforts to govern. And no one should imagine that Irish unity ‘is around the corner— because despite shared economic concerns, the Protestants’ “fear of the other” remains strong. Nevertheless, there can be no doubt that a threshold has been crossed and the Irish can now see a way forward.

For Palestinians, there are lessons to be learned from the experiences of the Irish and these recent developments. First, their Irish allies in the struggle for justice and equality have, after one long and brutal century, taken another step forward to erasing the vestiges of British colonial meddling. In addition, they should note that where there is a vision, a strategy to realize that vision, and a disciplined approach to implement that strategy, progress can be made.

There’s also a lesson for Israel. They can settle, annex, deny rights, and brutally impose hardships on a captive people, but, in the end, with Palestinian Arabs constituting slightly more than one-half of the population between the Jordan River and Mediterranean Sea, they cannot win. With each new settlement and new act of repression, they just keep digging the hole they’re in deeper.

The Palestinians should take a page from the Sinn Fein playbook, recognizing that there is a one-state reality in the making. This means articulating a vision of a state with equal rights, religious rights, justice, and shared prosperity. It means projecting that vision and developing a plan with partners in Israel who are willing to share that future. It means casting off the corrupt patronage systems that serve no purpose other than to maintain the status quo. It means rebuilding ties with Arab states that are making peace with Israel and cooperating with them to advance Palestinian rights and justice. And it means mass non-violent resistance and repudiation of stupid, counterproductive calls to use “axes and knives” or rockets— all of which only make the path forward more difficult.

The way forward will not be easy or short. But surely it is clear that the current visionless, strategy-less, and discipline-less approach isn’t going anywhere but further into the hole Israel is digging. If nothing else, the lesson of the Irish is that small steps guided by vision and strategy are the only way forward. Just as tiny, once colonized, and oppressed Ireland can lead the way for Europe to develop a values-based foreign policy, so too can Palestinians rise above their justified bitterness and like the Irish revolutionaries learn lessons from their oppression and project a values-based vision that becomes the beacon, lighting the way not only for a truly democratic Israel/Palestine, but also as an inspiration for struggling oppressed peoples everywhere.

October 4, 2022
ISLAMABAD: Ahmad Safeer of Pakistan has broken the Guinness World Record of India's Narayanan N of the most full extension punches in one minute. Ahmed,...