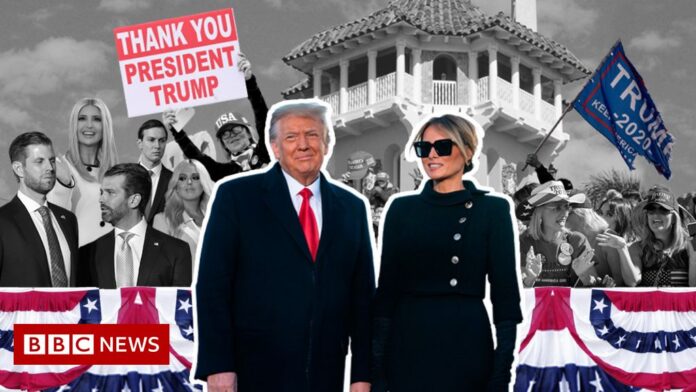 In addition to the predictable battles that normally occur between the Republican and Democratic parties, this year’s US primary election contests are featuring significant struggles being waged within both parties.

On the Republican side, the internal conflicts are not ideological. Instead, they’re personal— about Donald Trump, his legacy and leadership. With few exceptions, most Republicans are running on the same platform that brought Donald Trump to power in 2016. It’s an agenda focused on a range of “cultural” issues: fear of excessive immigration from non-European countries; restrictions on abortion; rejection of efforts to educate young people on matters of racial justice and gender equity; rejection of efforts to introduce reforms to police behaviour; and rejection of any gun control.

These cultural issues have been framed by Republicans as matters of personal freedom or the protection of traditional values. As such, they have succeeded in tapping into the discontent and sense of loss experienced by a broad swath of middle-class, middle-aged, non-college educated, mainly white Christian voters who have deep insecurities brought on by dramatic transformations in the economy, culture, and demographics of the US over the past half century. By embracing and racializing them,

Republicans have refashioned themselves as the party of the forgotten white middle class promising in Trump’s words to “make America great again” — which his supporters have understood to mean taking the country back to an imagined past glory.

What remains to be seen is whether Trumpism remains a winning formula for Republicans in November and whether the former president’s power at the polls can propel him to win the Republican nomination should he run again in 2024. To a great extent, the outcomes of the 2022 and 2024 elections will depend on how Democrats resolve their internal squabbles.

While this approach has won the support of many in the struggling white middle class, the actual Republican agenda has been one that has given free rein to conservative economic policies that have lowered taxes on the wealthy, ended government regulations that protected health, safety, and environment, cut back on needed social services, and appointed ideological officials and judges that support these policies.

Gone are the days of the moderate Republican. Former Presidents George H. W. Bush (1989-1993) and George W. Bush (2001-2009) both rejected Trump’s crass appeal. As did the 2008 GOP nominee, Senator John McCain. Even Senator Mitt Romney, the 2012 Republican presidential nominee, no longer feels at home in the party he once led. With Trumpism defining today’s GOP, the only question that remains is whether the former president still leads the movement he helped to take to victory in 2016.

There are pretenders to the throne, among them: Trump’s former vice president Mike Pence, his Secretary of State Mike Pompeo, his UN Ambassador Nikki Haley, and Florida Governor Ron DeSantis. On most issues, all of them, except one, are playing to the Trump base. While Trump himself has continued to insist that he won the 2020 election only to have his victory stolen by Democrats and faithless Republicans, not all of his erstwhile competitors are as obsessed with this issue— especially Pence, who Trump and the Trump faithful still hold responsible for certifying the electors who gave the White House to Joseph Biden.

So, Trump’s ideology is not being actively debated by this year’s Republican candidates for Senate and Congress, but loyalty to Trump is. It has been fascinating to watch the hoops that Republican candidates in this year’s midterm elections have felt it necessary to jump through to secure Trump’s endorsement— the most important of which have been to demonstrate their agreement with him that his 2020 “victory” was stolen by Democrats and to refuse to acknowledge Joseph Biden as the legitimate President of the USA.

And so, the primaries to date have not been about differing policies, since they all largely agree. Rather it’s been about who can court Trump sufficiently enough to secure his endorsement and pledge to support the kind of electoral “reform” policies that will give Republican governors and legislatures the power to undo the voters’ will in future elections.

To date, Trump-endorsed candidates have fared well. His chosen candidates have won important contests in Ohio, Pennsylvania, and North Carolina. Most of those who won are 2020 “election deniers.” Some are “White Christian Nationalists.” And a few are advocates of racialist “replacement” theory. They’ve averaged around a third of the vote in competitive multi-candidate races — demonstrating that Trump still has substantial political clout.

All this has left more moderate, traditional Republicans in a quandary. Some left the party in 2020. Others are struggling to find a new home. With the Senate and House Republicans and most of this year’s nominees now in lock step behind Trumpism, what remains to be seen is whether Trumpism remains a winning formula for Republicans in November and whether the former president’s power at the polls can propel him to win the Republican nomination should he run again in 2024. To a great extent, the outcomes of the 2022 and 2024 elections will depend on how Democrats resolve their internal squabbles. And whether they continue to surrender white voters to Trump and company.