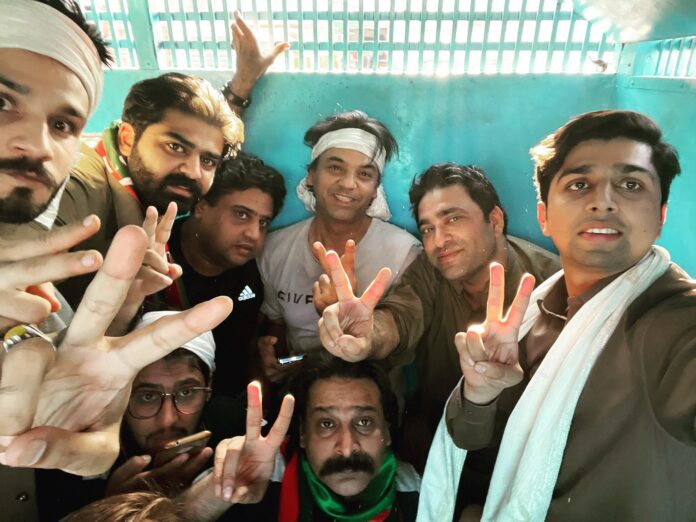 — Imran says jalsa will go ahead as planned, come what may

LAHORE: The Pakistan Tehreek-i-Insaf (PTI) has changed the venue of its Saturday rally in Sialkot after the local members of the local administration attacked the jalsa venue and ransacked the preparations and also arrested the party’s local leaders including Usman dar, Umar dar and others.

The Police contended that the Christian community had refused to give permission to the PTI for using the land for the jalsa owned by the Church. However, after initial scuffle with the security forces, the PTI leadership decided to change the venue but refused to cancel the jalsa.

The rally will now be held at the VIP cricket ground, some five kilometres away, the president of the party’s Punjab chapter, Shafqat Mahmood, announced in a press conference.

The move came hours after police stormed the venue and rounded up several party workers, including former minister Usman Dar.

A large contingent of police reached the venue, baton-charged and fired teargas shells at the workers and supporters who were making arrangements for the rally which is due to be held tonight but for which the local administration claims the permission has not been granted.

Don’t we have the right to hold a peaceful Jalsa? #SialkotFightsBack pic.twitter.com/RxynflO9Dp

The workers resisted the police operation as they stood in front of the machinery sent to remove the chairs, the stage and other materials arranged for the event.

Giving the reason for not granting the permission, the administration said that members of the minority Christian community were opposed to the gathering on the land — CTI Ground — they insisted belonged to the Church.

Sialkot District Police Officer (DPO) Hasan Iqbal, who was present at the site, told reporters that the community had objected to holding a rally at the ground.

“As you know we are right now standing on a ground that belongs to the Christian community. They had filed a writ [petition] in the high court, asking that no political rally be held on the grounds,” Iqbal said, adding the high court then directed the Sialkot deputy commissioner to listen to both parties and decide accordingly.

He added that the “political party’s leaders” sought permission to hold the rally but the Christian community had refused.

He said the deputy commissioner had also provided alternatives for holding the rally.

Talking to the media, Dar said the party had been granted permission for the event over a week ago. “But yesterday (Friday), the authorities withdrew the permission,” he said, and expressed the resolve that former prime minister and PTI chairman Imran Khan would come to Sialkot to address the rally come what may.

RALLY WILL GO AHEAD AS PLANNED: IMRAN

Responding to the violent events, Khan tweeted that what “imported [government] did in Sialkot against our [leadership and] workers is outrageous, but not unexpected.

“This bunch of criminals out on bail & their convict mafia boss in London have always used fascist tactics against opponents when in power.”

He announced he “will be going to Sialkot today, let there be no doubt.”

I will be going to Sialkot today, let there be no doubt. What Imported Govt did in Sialkot against our ldrship & workers is outrageous, but not unexpected. This bunch of criminals out on bail & their convict mafia boss in London have always used fascist tactics against opponents

Responding to police action, Shehbaz Gill, Khan’s chief of staff, said that what the nation witnessed was an act of intimidation by the goons of the ‘imported government’.

In a tweet, he said that holding public gatherings was the party workers’ basic right, and none could snatch that right from them.

He went on to add that the “imported government” whose days had been numbered was resorting to such brutal tactics because it was feeling jittery on account of PTI’s rising popularity. “Police’s operation in Sialkot is a clear reflection of that nervousness,” he added.

Meanwhile, Punjab Chief Minister Hamza Shehbaz also jumped into the fray, saying the party should select some other place in Sialkot as the present venue is property of the minority community and also houses a Church.

He said that the Christian community may object to PTI’s use of its land.

Shehbaz said his government would not allow Khan to play with the Constitution and law.

On the other hand, PML-N leader Attaullah Tarar said the government would not let the PTI use swathe of the Church for politics.

“Why the PTI does not hold its public rally at Sialkot Stadium which provides a much bigger ambience for holding a political meeting,” he wondered, adding the PTI was aware that it could not fill up the big stadium with people, so it wanted a smaller place for holding its rally.

“We challenge Imran to hold its rally at Sialkot Stadium,” Tarar said, adding that the PTI wanted to ignite communal clashes. He vowed that government would not allow that.

Tarar also said that if the government had to arrest the local leadership of the PTI in order to thwart this rally, it would do so.

Meanwhile, Khan urged all party workers to take to the streets across the country after Isha prayers and stage a protest against the “imported government”.

Police have initiated a crackdown against PTI activists in the wee hours of Saturday for organising the public gathering allegedly without their consent.

The Sialkot administration had dismissed the PTI request for political gathering on private property and provided them multiple options for the selection of another venue.

The administration took action and arrested PTI leader Usman Dar and other local leaders after party workers continued preparations for the rally.

Usman Dar was arrested after a scuffle broke out between PTI workers and police at the venue of PTI chief Imran Khan’s public meeting.

Police entered the venue of PTI public meeting claiming that the district administration had not allowed the party to hold public meeting at CTI Ground in Sialkot.

Upon resistance by PTI workers, police resorted to tear gas shelling and baton-charge in an effort to disperse PTI workers.

However, later PTI announced to change venue of public rally to VIP ground.

PTI Punjab President Shafqat Mahmood, while addressing a press conference with other party leaders, said that their peaceful party workers were tortured by police and claimed that police action was launched on directions of Khawaja Asif.

The former minister strongly condemned arrests of PTI leaders and workers and demanded their immediate release and reiterated that rally will be held in the city no matter what.