Stains on the trichotomy of power 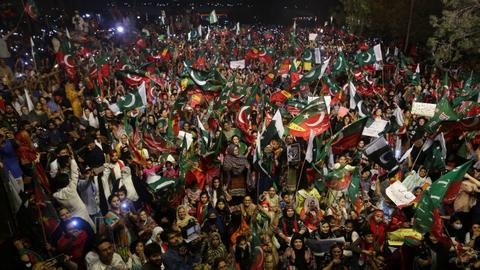 The political sphere of Pakistan has witnessed some unprecedented changes in the last month or so. The seemingly stable government of Imran Khan in almost its last year of tenure faced a no-confidence motion by about 17 political parties from in and out of Parliament. Never before in Pakistan had such a large number of political parties united against one political rival. Interestingly, MPs from Imran Khan’s own political party switched loyalties overnight, his allies began to flee and all the ideological differences of his opponents started to disappear in the mist of that no-confidence motion. So much so that the far right Tehreek Labaik Pakistan (TLP), notorious for supporting the killing of Punjab Governor Punjab Salman Taseer to the far-left National Democratic Movement (NDM), an offspring of the Pashtun Tahafuz Movement (PTM), united on the same page against Imran Khan, among others.

Surely, there would have been something behind this sudden squall? Former Prime Minister Imran Khan alleges a US regime change operation was at work in Pakistan. To back his argument, he shared a cipher with different institutes of the state,which has been validated by the country’s National Security Committee (NSC). The NSC also condemned the “blatant intervention” of the United States in Pakistan’s internal affairs by issuing a demarche in reaction.

“Whenever the Speaker decides or gives his ruling on any matter on the floor of the house or in his office on the file, as the case may be, it shall not be called in question and shall be final except on a motion for rescinding it.”

The Constitution of Pakistan is also quite clear in its Article 69 which bars all the courts from interfering in Parliamentary proceedings on any ground;

“The validity of any proceedings in [Majlis-e-Shoora (Parliament)] shall not be called in question on the ground of any irregularity of procedure.”

It further elaborates that;

The pillar of the state which carries people’s mandate stands meaningless today after the resignation of the largest party. It is only advisable that the confidence of people should be restored in the system by reviving their stake and ensuring the trichotomy of power in its true letter and spirit

The proponents of the no-confidence motion argue that the Speaker cannot give any ruling until the vote on no confidence motion is decided upon. However, the Rule 29 of the assembly rules, clarifies that in case of any ambiguity on the assembly rules, the assembly“shall be regulated in such a manner as the Speaker may, from time to time, direct.”So, even in that case, that matter would have still been decided within the House, instead of going to the courts, as per the rules.

The 1973 Constitution of the Islamic Republic of Pakistan, draws clear lines among the three pillars of the state; the Legislature, Executive and Judiciary. The constitution bars these three pillars from interference in each other’s domains, hence, the trichotomy of power exists in Pakistan (at least on paper). However, that trichotomy of power envisaged by the Constitution stands bruised and violated today as a result of the Supreme Court judgement of April 7.

The former President of the United States, James Madison, who is also hailed as the father of itsconstitution once said;

“The accumulation of all powers, legislative, executive and judiciary, in the same hands, whether of one, a few, or many, and whether hereditary, self-appointed, or elective, may justly be pronounced the very definition of tyranny.”

The situation here in Pakistan is not so different either, and the spontaneous outpouring of the masses in protests across the country is a testimony to that. However, some of the seasoned politicians who used to fight the case of Parliamentary supremacy and trichotomy of power have either gone silent or have taken a U-turn in support of this judicial assault on the Parliament of Pakistan, their statements from yesteryears and today contradict to a shocking extent.

Parliamentarians from the Pakistan Tehreek e Insaf however, have shown serious concerns over the judicial interference in the Parliamentary affairs. Dr. Shireen Mazari, former cabinet member, has called the Supreme Court judgement a judicial coup.Questioning the judicial interference in the parliamentary proceedings, she asked, how can Supreme Court dictate the Parliament on why and when it should conduct a session? She lamented that the short order of the Supreme Court even dictated the timings of the Assembly session. Former Law Minister Fawad Chaudhry, in one of his statements questioned, “How can the Supreme Court dismiss a ruling of the Deputy Speaker without even seeing the cipher on which the ruling was based?”

Another former minister, Asad Umar, while addressing the assembly said: “For once let’s assume that the judges didn’t like the ruling of the Deputy Speaker, but then are all decisions taken in Supreme Court liked by everyone? In the past, decisions from the same Supreme Court have also been called judicial murders. Would it be fair if the Parliament then starts dictating to the judiciary on the basis of those bad precedents set in the past? If Parliament cannot dictate to the judiciary, then the judiciary cannot dictate to the Parliament either.”

Furthermore, on the day of the voting, the Supreme Court of Pakistan refused to process the review petition filed by PTI at mid-day, saying that the courts’ time was over. However, the same court opened up at midnight on the same day for no apparent reason other than putting pressure on the Speaker of the House,which forced him to resign in protest. The Islamabad High Court also opened up around 10:00 at night to hear a petition which was based on mere assumptions, challenging the powers of the Prime Minister. All this midnight judicial activism was a clear disregard of Article 248 of the constitution, which states that;

“The President, a Governor, the Prime Minister, a Federal Minister, a Minister of State, the Chief Minister and a Provincial Minister shall not be answerable to any court for the exercise of powers and performance of functions of their respective offices or for any act done or purported to be done in the exercise of those powers and performance of those functions.”

The judicial proceedings throughout the process of regime change appeared to be far from a fair trial. The heavily politicized Supreme Court Bar Association (SCBA) and some other institutions, like the Election Commission of Pakistan, tried to influence the proceedings of the court by untimely interference and warnings. It is quite unfortunate that such apparent one-sided proceedings of the courts have only increased the mistrust of institutions and polarization among the masses. People have come out in protests in massive numbers and in almost every city of the country, saying that they do not accept the “imported government” and “judicial coup”. Families and women were seen crying and singing in a mix of hope and despair while registering their protest against what they consider the violation of their basic rights and an attack on their mandate.

Today, it is feared that as a nation, we stand at a point where any further misadventure of banning a political party through the judiciary or ECP, both controversial today, would backfire. Therefore, a careful path must be trodden before any other hasty decision escalates the situation beyond repair.The present situation of mistrust is above any person, party or institution. Even if any of them is taken out of the equation, the level of betrayal the masses feel would not end.

The pillar of the state which carries people’s mandate stands meaningless today after the resignation of the largest party. It is only advisable that the confidence of people should be restored in the system by reviving their stake and ensuring the trichotomy of power in its true letter and spirit.