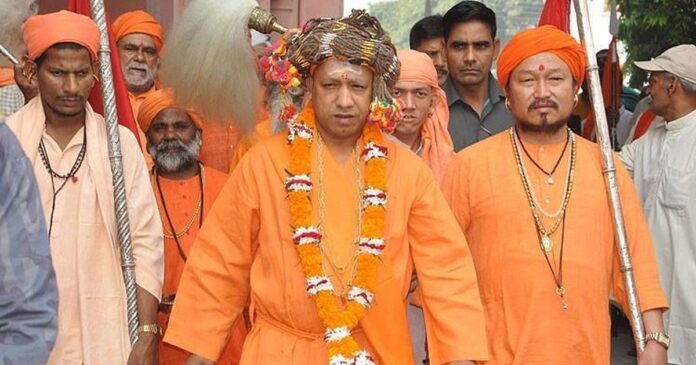 Elected with sweeping majority of votes second time in March 2022 as the Chief Minister of India’s largest and most populous state Uttar Pradesh, Yogi Adityanath, basically a Hindu monk-turned-politician, not only broke several previous records but also established a number of new and imitable lessons for the Indian politicians and to some extent useful for global politicians who take it as a profession and want to contribute something unique and non-traditional in this arena.

As politics is a game of numbers, he continued to appease mass of the people by his honest policy and transparent behaviour and found people’s love, affection as well as timely/valuable support first in 2017 and subsequently in the recent Assembly elections which made him an icon of Indian politics for the days to come along with a functional model of a Chief Minister, although his second successive crushing victory was not easy as there were so many parties, having a significant number of fixed vote-banks with large gathering of caste-followings, mainly on the part of Samajwadi Party and Bahujan Samaj Party headed by Akhilesh Yadav and Mayawati respectively.

In the context both Yogi Adityanath and the state Uttar Pradesh itself have a proud to feel that their province is also able to control the National politics at New Delhi on account of being an Assembly of 403 seats, who backed 80 seats for Lok Sabha out of 543 and 31 out of 245 members of Rajya Sabha with record voters of more than 150. The net result of his visible honesty and tireless efforts in politics turned the face of state game from caste to development which tried at his level best to accommodate all, a symbol of inclusive growth and development oriented.

Born on 5 June 1972 in a village of Pauri Garhwal, Uttar Pradesh, now in the state of Uttarakhand, with the name Ajay Singh Bisht and in a family of four brothers and three sisters, he happened to be second. After completing his bachelor’s degree in Mathematics from Hemwati Nandan Baghuguna, Garhwal University, in the 1990s he left his home primarily to join the Ram temple movement and about the same time became the disciple of Mahant Avaidyanath, the chief of the Gorakhnath Math.

With the start of the Ram temple movement by the Bhartiya Janata Party in the 1980s his Guru came together with the BJP to move further. According to a French professor, Christophe Jaffrelot, Yogi Adityanath belonged to a tradition of Hinduism propagated earlier by Hindu Mahasabha and his Guru Mahant Avaidyanath too was the disciple of Mahant Digvijay Nath who participated in the movement initiated by the Hindus to capture the Babri Masjid in Ayodhya on 22 December 1949.

The credit for coming back second time in the assembly election of 2022, was given to none but the pair of Modi and Yogi, the present and future hope of Indian politics. Like the first, the second term of Yogi Adityanath, beginning in March 2022, will prove its usefulness in the all-round development of the state in days to come.

Although, despite being in the politics of Ram Mandir and the BJP, when he, for the first time, was elected as a member of Indian Lower House, Lok Sabha, in 1998, launched a new organization called Hindu Yuva Vahini and became well-known for his activities in the eastern part of the province. As a result, he represented the constituency of Gorakhpur five times in succession in 1998,1999, 2004, 2009 and 2014. He was also elected Mahant or high priest of the Gorakhnath Math after the death of his Guru Avaidyanath on 12 September 2014.

In the post-Janata party disintegration phase, its earlier ingredient the Bhartiya Jana Sangh, in the year 1980, reconvened itself as the Bhartiya Janata Party and made a thin start with 11 seats in the State Assembly of 425.

It however, got popularity in the coming decade when the party attached itself to the agenda of Ram Mandir and remained committed to the Ram Janmabhoomi Movement launched by the Vishva Hindu Parishad and other nationalist groups. As a result of this rising graph, the party scored a clear mandate in 1991 and Kalyan Singh was appointed as the state’s first OBC chief Minister but his government fell in the wake of the demolition of the Babri Masjid on 6 December 1992. Even in the Assembly election of 1996 no party was able to get a clear majority and after one year of President’s rule in the state the BJP and BSP agreed to a six-months formula of chief ministership. This experimentHaving failed, the BJP tried several stalwarts from Kalyan Singh to Rajnath Singh, but none proved effective and it lost power in 2002, paving the way for the Samajwadi Party and Bahujan Samaj Party who ruled the state till 2017, until the coming of Yogi Adityanath in March.

Just before Yogi the assembly election of 2012 went in favour of SP and Mulayam Singh Yadav appointed his 38-year-old sonAkhilesh Yadav as the chief minister of Uttar Pradesh. However, a clear indication was given by the verdict of the 2014 Lok Sabha polls, in which the BJP won 71 seats out of 80 and broke the record of the last three decades only because it had exploited unprecedented voter turnout witnessing a unique coalition of cross-caste Hindu votes.

After the ample favourable environment at national level, the election for Uttar Pradesh assembly seats were held in the first quarter of 2017 in which the BJP got a thumping majority of 312 seats and Yogi Adityanath was appointed as the Chief Minister. The earlier regimes of both Mulayam Singh Yadav and Mayawati openly used the caste, communal politics and their image of musclemen that had ruined the state and the graph of corruption, entry of criminals into the politics, nepotism and favouritism, unemployment, deteriorating law and order all taken together took the state in deep sea.

Adityanath assumed the charge of the state’s chief minister on 19 March 2017, in a keen contest among the party leaders for the post. Since his elevation, he delivered positive results on all counts and satisfied the mass of the people without any distinction on the basis of caste, community, religion, region or anything else. Even his works and full-proof arrangement in curbing and mitigating pandemic covid- 19 was praised everywhere. His clear policy and impartial implementation thereof presented him as an efficient chief minister of the province.

The credit for coming back second time in the assembly election of 2022, was given to none but the pair of Modi and Yogi, the present and future hope of Indian politics. Like the first, the second term of Yogi Adityanath, beginning in March 2022, will prove its usefulness in the all-round development of the state in days to come.