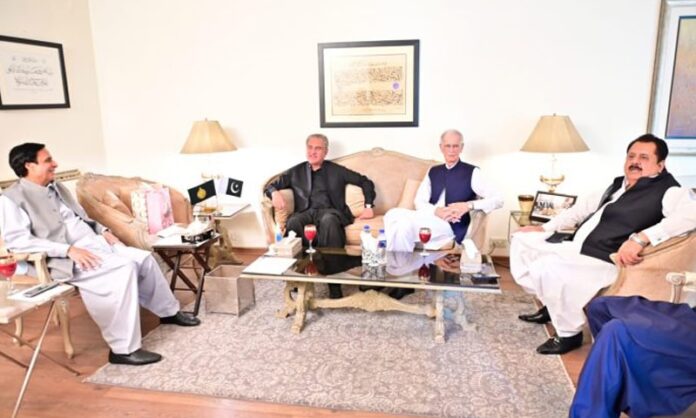 From the PML-Q, Punjab Assembly Speaker Parvez Elahi, his son and Water Resources Minister Moonis Elahi and Housing and Works Minister Tariq Bashir Cheema were present at the meeting.

With five seats in the National Assembly, the PML-Q is a key ally of the PTI in the centre as well as Punjab, and the opposition would require its votes in order for the no-trust move against the premier to succeed.

According to a statement issued by the PML-Q, Khattak and Qureshi conveyed PM Imran’s message to the party’s leaders. However, the statement did not elaborate on what the message was.

The statement further said Cheema apprised PTI ministers of difficulties being faced by his party over the past three and a half years.

For their part, the PTI ministers said PM Imran would be informed about the “situation” that Cheema had explained, according to the statement.

The statement also quoted Parvez Elahi as saying that PML-Q President Chaudhry Shujaat Hussain would be taken into confidence with regards to today’s meeting and that the next meeting between the two sides would be held in Islamabad.

Prior to the meeting, Parvez Elahi had remarked during an informal talk with media persons that the “drop scene of the drama ongoing in the country will not happen right now”.

“The characters of the play will change,” he had commented.