Financing the fight against climate change

Green bonds may encourage ‘greenwashing’ unless the developed countries step up 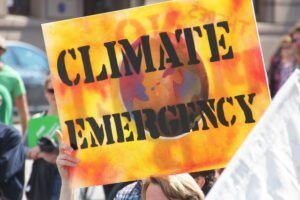 In addition to the fast-unfolding climate change, the way the OPEC-plus group of countries overall– reportedly keeping oil supplies artificially low to drive up prices, after the first few months during the pandemic– may very well give a greater push towards moving away from fossil fuel usage, and towards renewables and overall green, cleaner sources of energy. The war in Ukraine and the likely significant impact of this on oil supply, will only add to such pressures of making the shift as early as possible to more environment-friendly sources of energy.

Recent years have seen the rise in climate-change-related events, and resulted in greater urgency to tackle global warming. An important step has been to raise climate-change-related finances through floating ‘green bonds’. While developed countries have significant capacity to make needed climate expenditure, issuing climate or green bonds will be an important source of raising finance for combating climate change for cash-strapped developing countries, in addition to yearly climate financing provided by rich, advanced countries.

A recent Financial Times (FT) published article ‘Fears rise over ‘greenwash’ bonds’ highlighted the recent surge in green bonds issuance as follows: ‘The race to prevent catastrophic climate change is driving a massive expansion in the green bond market, where governments and companies can raise capital to finance their efforts to combat global warming. Issuance of green bonds reached a record $517.4 billion in 2021, up 74 per cent from $297 billion the previous year, according to Climate Bonds Initiative, a non-profit organisation that promotes investments to combat climate change. It now expects annual issuance of green bonds to exceed the $1 trillion milestone for the first time this year as estimates of the debt funding needed to tackle climate change risks continue to escalate.’

It falls on the rich, advanced countries to improve the record on providing climate-related finances to developing countries. No significant headway could be made in this regard during the COP26 meetings in Glasgow last year.

Achieving the target of keeping average global temperature to below 1.5°C, and meeting the associated net-zero carbon emissions target by 2050– to which many countries globally have pledged, while detailed plans on how to achieve this, especially by the main polluters hopefully come to the fore in the COP27 meetings in November later this year in Egypt– would require significant amount of climate related finances. The same FT article highlighted these investment requirements as ‘Many governments around the world have now pledged to reach net zero carbon emissions by 2050, a huge challenge that will require $9.2 trillion to be spent each year to develop new green assets and decarbonise the global economy, according to McKinsey, the consultancy.’

Specifically, the role of bonds in financing the effort to control the climate change effort, and re-orient economies accordingly, is indeed significant. The same FT article pointed out in this regard ‘Climate Bonds Initiative has predicted that annual green bond issuance will have to reach $5 trillion as early as 2025 if the global economy is to remain on track to achieve net zero carbon emissions by the middle of the century.’ Having said that, there is a need to save the bond financing effort from ‘greenwashing’, about which the same article pointed out ‘But this rapid expansion of the green bond market poses a problem for both regulators and investors who are concerned that it could encourage “greenwashing”, whereby companies make exaggerated or false environmental claims in order to help them raise money from investors.’

Here, it falls on the rich, advanced countries to improve the record on providing climate-related finances to developing countries. No significant headway could be made in this regard during the COP26 meetings in Glasgow last year, and it is hoped that not only $100 billion per year is provided to developing countries going forward, as remains pledged for a number of years by developed countries though it is still to be adhered to completely, but also that this envelope is enhanced over time, especially in the wake of high global inflation and tighter monetary policies increasing the cost of capital, along with greater technology, is provided to enable developing countries make the clean energy transition.

A November 2021 Project Syndicate (PS) published article ‘Fixing climate finance’ by Jeffrey D. Sachs who is one of the leading economists globally, pointed out in this regard as follows: ‘Against this background of high economic anxiety, developing countries see the rich countries refusing to discuss forthrightly the financing crisis developing countries face when it comes to climate-change mitigation and adaptation or other urgent needs. They see rich countries spending an extra $20 trillion or so on their own economies in response to COVID-19, but then failing to honour their promise– dating from COP15 in 2009– to mobilize a meagre $100 billion per year for climate action in developing countries. … The financial failures at COP26 are both tragic and absurd, going beyond the overarching failure to mobilize the promised $100 billion per year.’