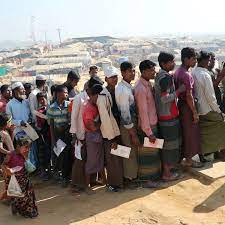 Despite having some ongoing crises worldwide, a piece of good news for the world is that Myanmar has expresses its interest in taking back/repatriating some Rohingyas (estimated 700 Rohingya initially) in Rakhine. Although the estimated number of refugees regarding Rohingya repatriation in Rakhine is very low, the significance of the issue seems to be very important. Myanmar military starts to understand that Rohingyas are the people of the Rakhine (Myanmar). It is appreciable that Myanmar understands the reality in the long run. But Myanmar should have goodwill and commitment to repatriate the Rohingyas. It would be pragmatic when Myanmar would ensure the implementation of its goodwill. Bangladesh is continuously emphasizing the efforts to facilitate early repatriation of the displaced people of Myanmar’s Rakhine state.

However, it is a matter of hope to note that there is a sign of progress in negotiations over the repatriation of the Rohingya ethnic minority of Myanmar from Bangladesh who were subjected to expulsions from Myanmar in 2017. Earlier, Bangladesh signed bilateral agreements with Myanmar on 30 October 2017 and on 30 October 2018 respectively. But the world didn’t see the implementation of the agreements.

Although there are more than 1 million Rohingya refugees in Bangladesh. 0.7 million new ones have come, 0.4 million were there before. Bangladesh has shown its humanity by sheltering these huge numbers of Rohingya. Neighboring Myanmar, on the other hand, has always played a controversial role at home and abroad. According to various reports published in Bangladeshi newspapers recently, the junta government of Myanmar has sent a letter expressing its interest in taking back the Rohingya.

In contrast to this position of Myanmar, Bangladesh wants to send back 1100 family members together. According to various reports from open sources, Myanmar is ready to start the repatriation process in the first phase. In this regard, Bangladesh Minister of State for Foreign Affairs  Shahriar Alam said that Myanmar has so far completed the screening of 26,000 Rohingya. Bangladesh hopes to repatriate 750000 Rohingya in various phases. And this repatriation is supposed to be done voluntarily and by ensuring a safe environment. The UN will also be involved in this process. The process of Rohingya repatriation has been stalled for a long time due to elections, military coups, and the Covid-19 pandemic in Myanmar. Discussions resumed on January 26 this year at a virtual meeting of the technical committees of the two countries.

Following the tripartite meeting mediated by China in January 2021, Bangladesh offered all possible assistance in light of the three bilateral agreements signed between the two countries to expedite the screening process of Rohingya refugees in Bangladesh. Moreover, both sides expressed their willingness in this technical-level discussion to find out the reasons for the delay in securing the previous residency of Rohingya in Rakhine. Highlighting the technical complexities and lack of information at the meeting, the Myanmar delegation assured assistance in completing the pending verification process.

More than 700,000 Rohingya were forced to migrate to Bangladesh after the start of the military operation in Rakhine on August 25, 2017. Despite international pressure, the Myanmar government made an agreement with Bangladesh to take back the Rohingya, but the repatriation has not started even today. On the contrary, Myanmar has repeatedly obstructed the repatriation process by resorting to various tactics. The international community has also not taken a strong stand on the Rohingya issue. On the contrary, they ended their ‘liability’ with boastful words. The Prime Minister of Bangladesh Sheikh Hasina Wazed has always shown humanity on the Rohingya issue. Myanmar’s current interest should not be manipulated in the end. In this case, Bangladesh must remain vigilant as always.

1)  Rohingya repatriation must be safe, continual, dignified, and sustainable based that is something Myanmar must guarantee.

2)  They should amend the ‘1982 citizenship law. They must consider Rohingyas as a legal ethnic group in Myanmar.

3)  Safe zone for Rohingyas must be ensured.

4)  They must fulfill the requirements or proposals of the Kofi Annan Commission (The Advisory Commission on Rakhine State), and the Bangladesh Prime Minister’s proposals at the 74th, 75th, 76th UN General Assembly.

5)  However, analysts advise Bangladesh to be cautious if Myanmar now wants to take back 700 people. They must keep their words. Myanmar must confirm it will take back all stranded Rohingya refugees in Bangladesh.

6)  They must be committed that the process would be a continual process. All Rohingya would be repatriated gradually.

7)  Bangladesh needs to increase diplomatic contacts Bangladesh needs to take a holistic stance on the Rohingya issue in various forums regarding the proposed Rohingya repatriation. Third parties such as UNHCR, Asean and even third countries can be included in the process.

9)      Myanmar must have goodwill to engage positively with Bangladesh. The world wants to see a fruitful and sustainable solution to the Rohingya crisis. Rohingya crisis solution would be essential for the safe and dignified repatriation of Rohingya people to Myanmar from Bangladesh.