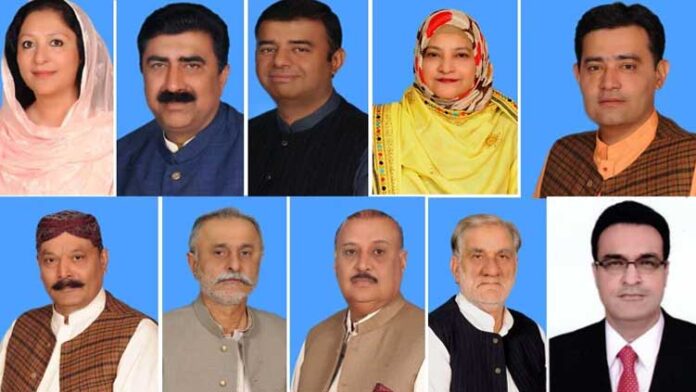 Ahead of the no-confidence motion against Prime Minister Imran Khan, dozens of PTI MNAs’ on Thursday were found staying at the Sindh House located in the red zone of the federal capital.

The rebel MPs came to the fore following a statement by Prime Minister that Sindh House was center of conspiracy as the opposition was busy in horse-trading with ‘bags full with cash’. The expose led to strong statements from PTI ministers while many lawmakers identified in a list of rebel lawmakers viral on social media issued videos and reiterated their loyalty to Prime Minister Imran Khan.

The dissident lawmakers vowed to vote ‘in line with their conscience’, implying that they would vote against their party. Among those prominent were Raja Riaz, Malik Nawab Sher Waseer, Basit Sultan and many others.

As per the TV footage making rounds on media, several other lawmakers from PTI — including MNAs Noor Alam Khan, Basit Bukhari and Wajiha Qamar were seen staying at the facility, giving a clear indication which side they would be tilting towards in the upcoming vote that will decide the fate of the prime minister.

Riaz, who is a member of the Jahangir Tareen group, told media that there were around 24 PTI lawmakers staying at the Sindh House, saying they moved to Sindh House citing fears of government’s action against them similar to the March 10 raid by police on Parliament Lodges.

He further said that if PM Imran gave the guarantee that no police action would be taken against the MNAs irrespective of their decision regarding the vote, the were ready to move to Parliament Lodges from the Sindh House.

“All of the media and the nation knows that the police attacked the lodges and our opposition MNA was tortured and taken to the police station. After that, we — those who had been dissenting for a long time against inflation, corruption, the SAPMs and the lawlessness, and had been raising our voice in front of Khan sahab — felt that the incident that happened in the Lodges could also happen with us, and this is why we are here,” Riaz stated.

“No one has given us any money. God willing, we will give our vote based on our conscience. We are not afraid of anyone. We are here only as a precautionary measure,” he added.

Earlier in February, Information Minister Fawad Chaudhry alleged that three PTI MNAs had been offered bribes to support the opposition’s planned no-confidence motion in the parliament.

When asked if he had taken Rs200 million to switch allegiance, Riaz chuckled and replied: “I cannot think of accepting even a rupee.”

Another PTI MNA, Noor Alam Khan, said that he was “very disappointed” to know of allegations being levelled against dissident lawmakers. “When we came to Imran Khan sahab and had voted for him, were we given Rs200m then? When we voted for the speaker did we get 200m then?”

He appealed to the chief justice of Pakistan, chief justice of Islamabad High Court, chief election commissioner and the Islamabad district administration to ensure that every MNA, irrespective of who he wants to vote for, is provided protection to reach the National Assembly for the no-confidence vote.

When asked whether he would go the parliament on the day of voting, he replied, “Definitely. It is my right.”

Another MNA Dr Ramesh Kumar Vankwani revealed what led him to swap the Parliament Lodges for Sindh House. He recalled that a pair of men from the PTI recently gathered came to the Lodges and accused him of “being a traitor to the party” and even threatened to vandalise his cars.

“This happened the day before yesterday at the Parliament Lodges. They were from the PTI. I wasn’t there at the time but my wife informed me.”

“Then I approached Sindh CM Murad Ali Shah through someone and told him that I wanted a room at Sindh House. Murad Ali Shah said all rooms were booked but I told him my problem was genuine.

“And three federal ministers have left [the PTI],” he added.

Another PTI MNA at Sindh House who also aired his grievances against the party was Basit Bukhari.

Meanwhile, MNA Malik Nawab Sher Waseer said he would not contest the next general elections on a PTI ticket.

PPP MNA Abdul Qadir Patel who accompanied the dissidents said that the disgruntled members of the PTI are “living peacefully in Sindh House,” and “will leave after we oust Niazi [Imran Khan].”

Patel said that it is their constitutional right to cast their votes and they are ready to see how many people PTI manages to bring on March 27 jalsa. He was of the view that a flood of people was seen during PPP’s long march.

Taking a jibe at Federal Minister for Information and Broadcasting Fawad Chaudhry, he said that he changes his stances with the party he is in. Claiming to have his screenshots where the information minister was cursing PTI members, he said: “Fawad is doing his job and he is following the practice of multinational companies where ever he finds a good package he switches his place.”

Reacting to his statement, Fawad Chaudhry said that some people have been identified after they feared that action would be taken against them.

Taking to his official Twitter account, the minister wrote: “Had they been conscientious, they would have tendered their resignations.”

He urged the speaker of the National Assembly to take action against these “traitors” and demanded a lifetime disqualification for them.

A day earlier, the government claimed the opposition had detained some ruling party lawmakers at Sindh House ahead of the vote after a statement by Punjab Assembly Speaker Chaudhry Parvez Elahi that around a dozen MNAs belonging to the PTI had ‘gone missing’.

The PM stated in a public address on Wednesday that opposition leaders were sitting in Sindh House with “heaps of money” to purchase loyalties of treasury lawmakers and had asked the election commission to take action against the alleged horse-trading.

PPP leader Faisal Karim Kundi had earlier confirmed the stay of some lawmakers at Sindh House during a press conference with PPP MNA Shazia Marri. “Every member has a right to stay there. These members are from the opposition and our allies,” he had said, adding that MNAs had been kept there as they feared they could be kidnapped ahead of the no-trust vote.

In a video shared by the PTI on Twitter, he said the government has received information that a large amount of money had been shifted to Sindh House, which he termed the “capital of horse-trading at the moment”.

“Information has been received that a lot of money has been shifted to Sindh House, police have been called to detain people and it is the horse-trading capital right now. It is very unfortunate. We had gotten rid of this menace with great difficulty.

“The way marketplaces have been set up is against the Constitution and tantamount to playing with the country’s future. This is why we are planning strong action on this,” the minister said.

However, Chaudhry’s statement contradicted Interior Minister Sheikh Rashid who stated that the government is “not taking any action against anyone right now”.

Addressing a ceremony in Islamabad earlier on Thursday, Chaudhry also claimed that lawmakers’ votes were being bought and sold at Sindh House.

“The kind of bidding that is happening, the way conscience is being sold … I tell these people to beware of the time that [Prime Minister] Imran Khan calls on us and youngsters to stop the horse-trading ourselves,” he added.

Meanwhile, PPP Chairperson Bilawal Bhutto-Zardari claimed that MNAs had been “threatened with violence, arrests and dire consequences” if they participated in the no-confidence vote.

“Their lives, liberty and family are under threat. MNAs will take any and all means for their own protection against this fascist regime,” he said, vowing that the Pakistan Democratic Movement (PDM) and the PPP would protect the lawmakers.

Bilawal said the opposition did “not want anarchy” in Islamabad in view of the upcoming meeting of the Organisation of Islamic Conference (OIC) foreign ministers meeting next week, warning the government to “not provoke us”.

Earlier today, in a bid to thwart the Opposition’s no-trust move, the PTI political committee meeting, headed by PM Imran Khan, decided that Islamabad’s Sindh House will not be allowed to turn into a horse-trading hub, well-informed sources revealed.

The Sindh House started making headlines after a federal minister accused the PPP of using the building for its “nefarious designs.”

On March 14, federal minister Ali Zaidi had claimed that the PPP has deployed additional SSU commandos at the building “to protect the bags of looted wealth #ZardariMafia brought to try [and] bribe our MNAs!”

Following up on his statement, the PTI minister also wrote a letter to Secretary Establishment, demanding an immediate inquiry on SSU Sindh DIG Maqsood Memon.

Sources privy to the matter said that the meeting decided to strictly monitor the lawmakers and Sindh House to ensure that no one falls prey to horse-trading.

Civilian intelligence agencies were directed to closely observe the location, mobile phone data and the movement of lawmakers, and report to the premier on a daily basis.