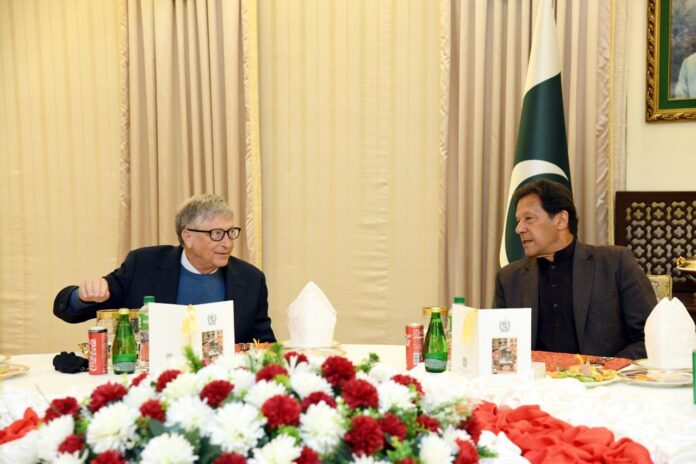 ISLAMABAD: Microsoft founder Bill Gates Thursday called on Prime Minister Imran Khan and lauded measures taken by Pakistan to combat polio and Covid-19 diseases and the performance of the National Command and Operation Centre (NCOC) and welfare initiatives amid Covid-19, including the Ehsaas programme.

Gates, who is also a co-founder of the Bill & Melinda Gates Foundation, arrived here Thursday morning on his first-ever visit to Pakistan, Minister of State for National Health Services Dr Faisal Sultan tweeted.

It is a pleasure to welcome Mr Bill Gates on his first ever visit to Pakistan. Planned engagements include review of progress on polio eradication; visits to NCOC and Ehsaas program as well as meeting the President, the PM and health leadership of the provinces.

During the daylong visit, Gates also called on President Dr Arif Alvi, Minister for Planning and Development Asad Umar who also heads the NCOC, Dr Sultan and others.

During his meeting with Prime Minister Khan, Gates expressed gratitude for inviting him and extending warm hospitality on his maiden visit. He appreciated the efforts of the Pakistani leadership, health workers, and parents for working tirelessly to ensure polio never paralyses a child again.

Later, Bill Gates called President Dr Alvi. The President conferred on Mr Gates the award of Hilal-e-Pakistan in recognition of his services for the eradication of polio and the betterment of the people of Pakistan at an investiture ceremony held at Aiwan-e-Sadr.

In a statement, the NCOC said the philanthropist attended the forum’s daily meeting. There, he was informed about the federal body’s role and methodology, its achievements since the start of the Covid-19 crisis, the latest pandemic situation in Pakistan as well as the non-pharmaceutical interventions (NPIs) employed by the forum to control the spread of the viral disease.

Hosted @BillGates at the NCOC this morning. Shared with him the work which has been done for covid response in Pakistan and the role played by @OfficialNcoc. Thanked him for the support provided by the @gatesfoundation. He was appreciative of the covid response effort in Pakistan pic.twitter.com/pasYqnJ2gq

Gates and the delegation accompanying him were also told about genome sequencing and various coronavirus variants detected across Pakistan, the statement said.

During his visit to the body, Gates also shared his views on the pandemic, especially the inoculation drive.

He later attended a luncheon hosted in his honour by the prime minister.

Mr. Bill Gates is visiting Pakistan at the special invitation of the Prime Minister. pic.twitter.com/zSYNI6ddki

Gates’ multi-billion dollar philanthropic foundation is one of the biggest fund providers of the polio eradication campaign in Afghanistan and Pakistan.

Polio is a virus that spreads in areas with poor sanitation. It attacks the nervous system and can cause irreversible paralysis within hours of infection. Children under five are the most vulnerable, but polio can be prevented with vaccination.

Success in reducing case numbers worldwide has been largely due to intense national and regional immunisation campaigns in babies and children.

In a 2019 interview with Reuters, Gates said the global polio programme is making progress in Pakistan and has a good relationship with Prime Minister Khan who has prioritised the polio fight.

“We’ve got to get Afghanistan and Pakistan to zero,” Gates said. “We need government donors to stay committed.”

The “only potential negative” in the region is instability in Afghanistan, Gates said, where Taliban leaders appear to have no single policy but “decide what they will and what they won’t allow” regarding polio vaccinations.

“That’s what we don’t have predictability or control over,” he said.

“Sometimes they stop the campaigns from taking place. But the ideal is when they allow house-to-house (vaccine) delivery.”

December 9, 2022
KARACHI: Special Assistant to the Prime Minister on Industries and Production Tasneem Ahmed Qureshi on Friday stressed on maximum utilisation of available resources of...