Lahore has always been popular 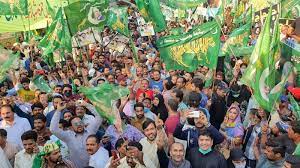 While Lahore is the brain centre of the country, Rawalpindi was recognised as a garrison city. Though I was born and raised in Lahore, I also spent considerable time in Rawalpindi. There were stark differences between the two places. Before the first usurper moved the capital near the GHQ (General Headquarters.) The city had a few good bakeries, decorated tongas and malangs frOMHazrat Bari Imam who roamed in Raja Bazar carrying huge green flags. Rawalpindi was my second home as my father’s family decided to live there after migration from Ludhiana in East Punjab after the partition of the Indian Subcontinent in 1947. Both families hailed from Kashmir. One migrated to Lahore and the other to Ludhiana in the later part of the 19th century. The Khalifa family of Lahore gained prominence from the scholarily activities of my mother’s uncle, the wll-known Islaimic scholar Dr Khalifa Abdul Hakim who was a close friend and contemporary of Dr Muhammad Iqbal. Double migration of my paternal family had a heavy toll on them, first East Punjab and then the newly created state of Pakistan, as a consequence they decided to go back to their roots in the valley. As Rawalpindi was closer to Kohala they decided to settle there, hoping to resettle in Kashmir.

Even the Sufi traditions of the two cities remain very different. Lahore is called ‘Data ki Nagri’. On Thursday is Qawali Night at the Shrine, which continues to inspire the people of the city. Kashf-ul-Mahjoob, the book written by Ali Hajveri, stands out as masterpiece of Sufi thought.

In Rawalpindi there I saw these malangs‘ roaming around and the Sains (special persons with sprituality), some of whom were scary and even violent at times. Sain Mirchu was one of them who used to beat up people, last year I discovered his Shrine in Islamabad close to the Kashmir Highway.

In a credible free and fair election Lahore has always come ahead but with our history of forced mandates Rawalpindi parties have succeeded which have now become a menace for our democratic dispensation. As poitics demands mind and vision, the city of intellect is better qualified for this challenge, Rawalpindi the garrison city is best suited to fortify our borders.

I am glad my late mother who hailed from Lahore was able to convince my father to settle down here, the city of intellect and depth. With her Sufi leanings we regularily visited the Shrine of Data Sahib but during our visits to Rawalpindi we went to see Sain Mirchu and later Sain Mira. Both were totally different experiences. My dose of spirituality was more serene in Lahore, while in Rawalpindi I was always on my toes to run away from the blows of the Sains. It was more of love here and fear there. Perhaps the same is reflected in the conduct of the political parties launced at the two places. Interestingly the Red Light Area of Lahore is called Heera Mandi (Diamond Market) while in Rawalpindi it is named Kasai Gali (Butcher Lane).

While still in school, we the students of the first born free generation of Pakistan decided to take on the first dictator of the country. One afternoon in November 1967 I saw a huge gathering at the YMCA Hall on the Mall where we went for daily games. With my badminton racket in hand I ventured into the hall. The dashing Ex-Foreign Minister Zulfiqar Ali Bhutto (ZAB) was addressing a very charged crowd. He had come to launch his movement against the usurper under the banner of the Pakistan People’s Party (PPP). It was the start of a new political journey.

‘Islamic Socialism’,, his message was loud and clear. The term had been introduced by a son of the city, Dr Khailfa Abdul Hakim, in his classic book Islam and Communism. ZAB further simplified his message into Roti, Kapra aur Makan which was widely understood by the masses. Earlier Mian Ifhtikar-ud-Din, another proud son of the city led the left of centre progressive political group within the All India Muslim League. He had also started the Progressive Paper’s Limited (PPL) which published The Pakistan Times in English and Imroze in Urdu. The change-minded progressives and the youth joined the new political entity in droves. After the partition of the Indian Subcontinent, Lahore had the unique distinction of being the place of birth of the first genuine political party of the country which then took on the Rawalpindi Sarkari League called the Pakistan Muslim League (Convention). Interestingly the PML (Con) was also launched in Lahore through the newly created Muslim League House on Davis Road but it was concieved in the Garrison City where even the Sufi traditions were not as people-friendly as compared to the City of Intellect. It did not end here, the list of Rawalpindi Parties is long (PML-N, PML-Q, MQM, MMA etc) to name the important ones which all played negative roles in our democratic struggle.The PML*Q) even offered to elect the dictator in uniform as President of the republic, perhaps the first such anti-democracy act in human history.

Then in April 1996, Imran Khan (IK) a son of the city who was revered for winning the Cricket World Cup in 1992, decided to open his political innings with the launch of the Pakistan Tehreek-e-Insaf (PTI). Known for his resilience, the Kaptaan struggled for political survival till the two mainstream parties (PPP and PML-N) lost popularity due to massive corruption and poor governance. In October 2011, IK emerged as a third political option in the barren arena of politics. His entry brought freshness into the stale air around. Lahore had done it again. Another genuine political entity had emerged to take on the Rawalpindi Party called PML(N). In 1970 it was PPP versus PML-(Con) while in 2013 it was PTI versus PML(N) or in other words Lahore versus Rawalpindi

In a credible free and fair election Lahore has always come ahead but with our history of forced mandates Rawalpindi parties have succeeded which have now become a menace for our democratic dispensation. As poitics demands mind and vision, the city of intellect is better qualified for this challenge, Rawalpindi the garrison city is best suited to fortify our borders.