Corporal punishment as a means of child discipline 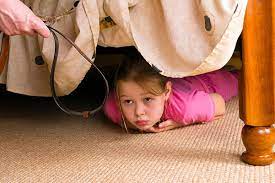 Punishment of children is common in home and at school. The resort to it is made to ensure development or elimination of certain behaviour in minors. The punishment used is mainly of three types: (1) presenting something undesirable after a behaviour, for instance, chastising, shouting or hitting; (2) taking away something positive after a behaviour, examples are taking away a privilege or isolating from an activity; (3) requiring a child to perform some undesirable and unwanted task, such as making him clean up the mess created by him or making him do sit-ups or standing with hands up.

The most obnoxious punishment usually resorted to here is of physical kind. In September 2019, Hunain Bilal, a 10th class student in a private school at Lahore, was tortured to death by his teacher for not memorising a lesson. In September 2018, Muhammad Hussain, a nine-year-old student,

was beaten to death by his madrasah teacher. In June 2017 an 11-year-old girl in Gilgit succumbed to the wounds inflicted by her teacher in a government school. There are many such examples where physical punishment has resulted in the death of minors.

Corporal punishment is against the spirit of the United Nations Convention on the Rights of the Child (1989), whose articles 19, 28(2) and 37 are contrary to it. Article 19 of the convention says “States Parties shall take all appropriate legislative, administrative, social and educational measures to protect the child from all forms of physical or mental violence, injury or abuse, neglect or negligent treatment, maltreatment or exploitation…..” The physical kind of punishment is also violation of Article 14 of the Constitution of Pakistan, which promotes the dignity of all citizens.

The parents and teachers believe punishment makes a child change his behaviour in a lasting way. But the research on the matter tells something different and opposite. A new study published this year in the Journal of Pediatrics has revealed that kids who are spanked have behavioral issues similar to children who have been neglected and abused. And the researchers are making a call for change.

Children are to be treated with honour and respect so that they could retain their dignity and self-respect . There is a dire need of educating parents and teachers on how to influence the behaviour of children without turning to corporal kind of punishment.Several laws , such as Prohibition of Corporal  Punishment Bill 2014 , have been formulated that prohibit physical torture of children and specify  punishments for such acts. Yet, the proper implementation of these laws seems a distant dream.

It is believed by experts that while punishment may surely have an immediate effect, it is not enduring. In other words, for the time being the child changes his behaviour, but the change is not lasting. child who is disinclined to doing his or her homework , if chastised or beaten, will surely do his or herchomework at the  time to escape the further punishment , but this will not create in him any enduring interest in doing  homework . Similarly, if a child does not talk with elders politely, the act of punishing him or her on it will not help in creating lasting respect for elders in his or her mind.

The punishment produces negative effects on a child. It produces negative reactions in the child. This includes crying, arguing or even striking a parent or a teacher. Another effect on the child is consolidated feelings of distancing himself or herself, physically and psychologically, from the person who punishes- whether a parent or a teacher. Besides, punishment increases in a child aggressive behaviour, or she may retaliate by hitting the punisher. Moreover, the punishment technique models behaviour that the child tends to use with his peers. If a child is shouted at, he or she uses shouting with his or her peers, and if is beaten, he or she learns resorting to hitting when with peers.

Instead of spanking, better discipline strategies can be formed to transform the conduct of children. It will be very productive to use praise as a tool for influencing child behaviour. If a minor does something good he or she should be praised for it. Praising one in the presence of other children, will also produce a stimulating effect on the rest for adopting the admired behaviour.

The rebuke and criticism of wrong habits and activities can make children disinclined to these.  They will, by and large, remain tend not to display such conduct or adopt such habits that are reprimanded. Children often become rude when they think that they are not given a chance to express their feelings and are not being listened to. Speaking with them with a gentle tone of voice and conveying to them the realization that they are listened and honoured can make them turn around their rough and rude attitude to a good and liked one.

Rewarding is another helpful tool for shaping conduct of children. An incentive can prompt one to shed off misbehaviour and exhibit the attitude for which it is promised. Ignoring mild misbehaviour can prove more effective than spanking. Snatching a certain privilege for time being may also be a useful tactic. For example if a child watches television or plays a game more than the prescribed time, he or she can be deprived of the television and the game for 24 hours. Next time the minor will think against indulging himself or herself in the activity more than the designated time.

Children are to be treated with honour and respect so that they could retain their dignity and self-respect. There is a dire need of educating parents and teachers on how to influence the behaviour of children without turning to corporal kind of punishment. Several laws, such as Prohibition of Corporal Punishment Bill 2014, have been formulated that prohibit physical torture of children and specify punishments for such acts. Yet, the proper implementation of these laws seems a distant dream.

M. Ilyas Kalhoro
The writer is an educator and an independent educational researcher from Lahori Muhalla, Larkana