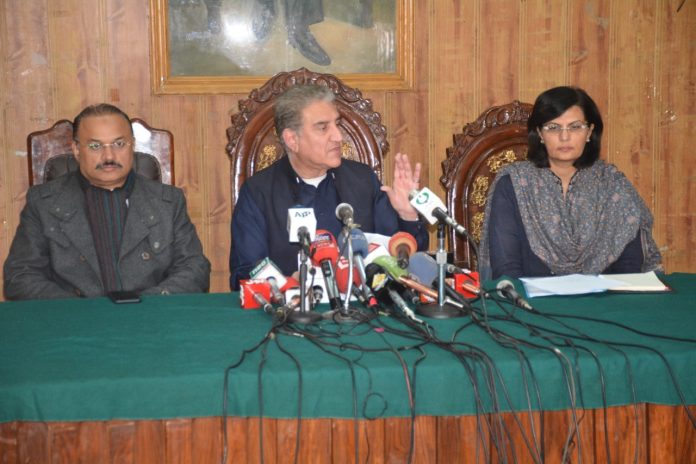 Fencing of Pak-Afghan border is in the interest of both the countries to regulate and facilitate trade and movement through the border so that unscrupulous elements do not get any opportunity to misuse Afghanistan or Pakistan’s land for their nefarious designs.

“It was meant to regulate movement across the border through visa and we are moving forward to that end,” he added.

Qureshi said almost 95 percent of fencing work has been completed, adding that the country suffered difficulties, hurdles and martyrdoms during the work.

The foreign minister said that he is hopeful that the issue would be resolved through diplomatic channels and talks.

“There were some incidents that we have taken up with the Afghan authorities. Our talks are ongoing and they have given us a positive response,” the FM said.

“We must not forget that there are spoilers who do not wish to see the exemplary friendly relations between Pakistan and Afghanistan moving forward. They do create hurdles and would continue with it but we will thwart their nefarious plans.”

He said that while on way to muster up support from international community to help Afghan people, Pakistan has recently contacted neighbours of Afghanistan and established a new platform titled “The Immediate Neighbours of Afghanistan”, adding that its first meeting has taken place in Islamabad, another in Tehran and the third meeting is scheduled to take place in China in February.

Qureshi said Pakistan has been making strenuous efforts in raising the serious issue of humanitarian crisis and economic collapse in Afghanistan at different forums, adding that Prime Minister Imran Khan has advocated the case of Afghan people at the United Nations while he has himself talked to foreign ministers of different countries to initiate a global effort to save Afghan people from troubles.

Special representatives from European Union, Canada, Germany, Australia and other important countries also attended the meeting that was organised with the sole objective of saving Afghan population, including children and women, from the food crisis and extreme cold, he added.